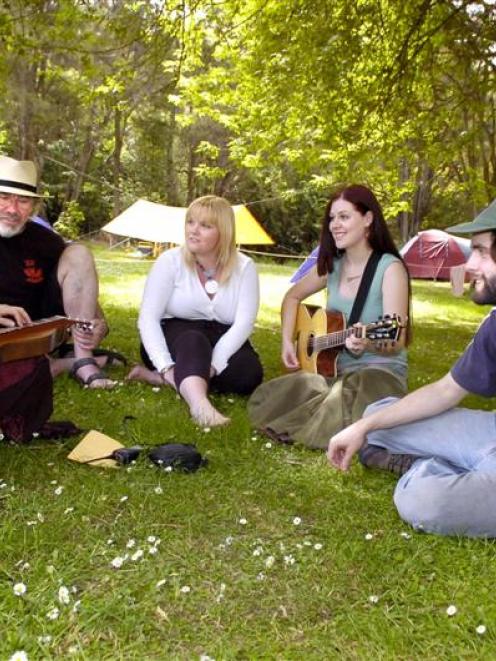 Bernadette Berry (left) enjoys some music with Mike Moroney, Lee O'Brien, Siobhan Moroney and Patrick Copeland, all of Dunedin. Photo by Jane Dawber.
Well, hasn't the year gone fast? It seems hardly any time since I was last writing about the approach of the Whare Flat festival and New Year's Eve concert in the Octagon, but here we are again.

Whare Flat publicist Mike Moroney says the festival is approaching middle age, but there's no sign of it getting podgy in the middle.

This is the 35th Whare Flat Folk Festival.

The first few back in the '70s were called a "folk camp" and were just a gathering of a few folkies playing music together.

Out of this the festival grew, with guest artists and greater attendances.

In previous years the festival has attracted an international artist.

However, that is not the case this time around, Moroney says.

"There is no international guest this year. If it is because of the recession, it's not at our end. We are always inundated with artist applications throughout the year. This year, the better ones just happen to be all New Zealand artists. We don't put a premium on overseas artists."

He says the folk genre is growing in popularity, especially among youth.

"Folk is a deceptive categorisation. It basically covers all acoustic-based genres. We have everything from (not-so-acoustic) blues, contemporary singer-songwriters as well as the traditional aspect of music and dance. It is the `new black' where youth are concerned.

"All the folk festivals and clubs around the country are reporting an insurgence of young performers - artists like Old Crow Medicine Show and Crooked Still have made it accessible. Just check out the buskers at the farmers market."

Catch it
When: Wednesday, December 30 to Sunday, January 3
On the bill: Beverley and the Clench Mountain Boys, and Tamlin from Auckland, Delgirl, Port an Puca, Peter Madill and more from Dunedin, The Eastern from Lyttelton ... and, as they say, many more.

For those who'd prefer a one-night stand on New Year's Eve, Delgirl plays with others in the Octagon before the traditional fireworks at midnight to bring in 2010 with a bang.

PS: Thanks to all the musicians we've chatted with over 2009. I look forward to talking to you in the new year.