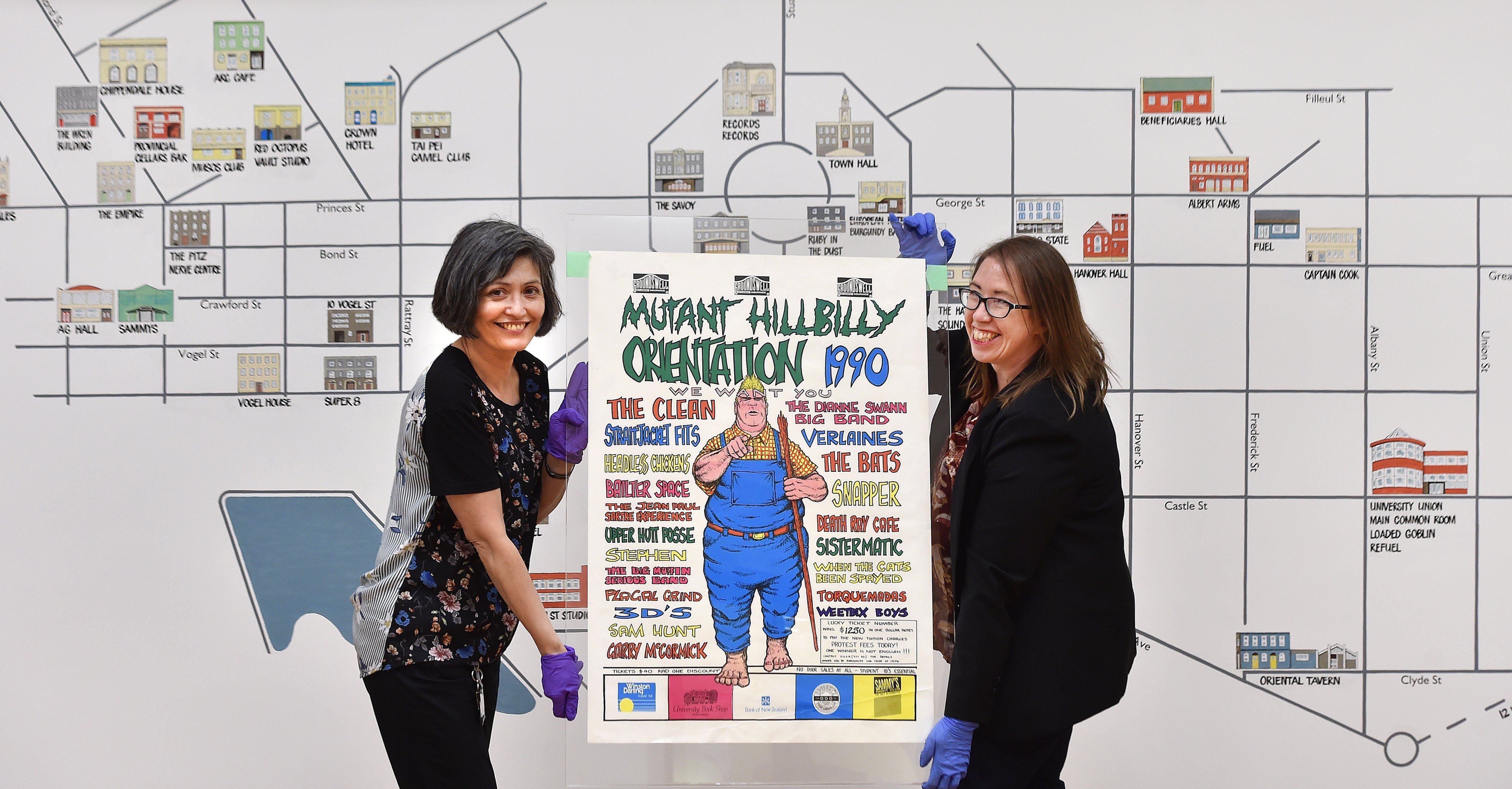 Katherine Milburn (left) and Amanda Mills holding Mutant Hillbilly Orientation 1990 in the Flying Nun Exhibition at the Hocken Library on Monday. PHOTO: PETER MCINTOSH
Dog-eared with the odd tear, hand-drawn or painted, bearing pin marks from their time on pub or student union walls, these posters are having a second life - framed like works of art.

They are part of the Hocken Library’s collection of memorabilia from Dunedin’s music scene from the 1970s to today.

Many of these pieces have been donated over the years for the Hocken’s safekeeping and so they can be freely available to people.

Two of the library’s librarians and curators in charge of looking after the collection’s music and ephemera - Katherine Milburn and Amanda Mills - think Flying Nun’s 40th anniversary this year is the perfect opportunity to showcase these collections.

"It’s a real chance to feature them and let people know about them," Milburn says.

The term "Dunedin Sound" has existed since 1981, a "catch-all" label for the music coming from the city in that era.

In the same year, Roger Shepherd founded Flying Nun Records in Christchurch to record and release music coming from Christchurch and Dunedin.

As a result, bands such as The Clean (Tally Ho! was one of Flying Nun’s first releases), The Chills, Straitjacket Fits and The Verlaines began to gain wider attention. The Clean’s Boodle Boodle Boodle EP charted at No 5 on the New Zealand top 40 singles chart and sold over 10,000 copies.

While Mills was a bit young, Milburn can remember buying the albums from bands of the time.

"We’re both really big fans of the music," Mills says.

But it is not just posters going on display in "Kaleidoscope World"; there are of course albums, music, photographs, clothing - no exhibition from the time would be complete without the "leather jacket" of Chills song fame - and musical instruments, to name just a few.

Some amazing items turn up at the Hocken when curators least expect it, they say.

While most are from the collection, some items are on loan from those in the industry at the time, such as artworks from Christine Colbert (who was married to the late writer and Records Records owner Roy Colbert) and Graeme Downes (of The Verlaines), and Michael Morley’s (of The Dead C) guitars, amp and pedals.

"We’re really grateful to the music community for loaning, donating and giving us permission to show these things," Mills says.

"The hardest thing was choosing what material not to include."

In the end they have chosen to include a couple of big screens so they can showcase more photographs than they could hang on the walls.

There is also an audiovisual projection of music from the time with two to three songs from about six bands’ live performances from the 1980s and 1990s.

"It shows what it was like to be at a gig at that time. A lot were in pubs."

The Hocken also holds the papers, recordings and posters of Xpressway Records of Port Chalmers, a breakaway label from Flying Nun, so a corner of the exhibition will be dedicated to it.

Among the finds in the collection was a letter talking about the 1990 "Hillbilly" orientation, asking Xpressway for records and money.

"It jumped out at me because it was written in coloured felt pen or watercolour, it was all the colours of a rainbow, the lettering. Its one of the key images from that orientation poster. So finding that was really lovely," Mills says.

Another feature of the exhibition will focus on how people heard the music at the time. Part of that is the mural painter and musician Robert Scott, of The Bats (vocals, guitar) and The Clean (bass), is painting on the back wall of the exhibition space, showing some of the venues where the music of bands which recorded with record label Flying Nun had their start and played regularly.

The nearly 30 venues were scattered across the city but many are no longer around. Milburn’s research found that by 2001 the number of pubs and bars offering live weekend entertainment listed in the Otago Daily Times gig guide had dropped to 15, there were nine in 2010, and only one in July 2021 - the Crown Hotel.

There is also a "record shop" section showcasing how music is played has changed over the years from vinyl to cassettes to CDs to digital.

"Straitjacket Fits’ first show was on the union lawn in 1986 and we’re really lucky to have been loaned a photo of that first performance," Mills says.

They were thankful to people in the music community who helped them with material and contacts.

"We’re hoping they’ll enjoy seeing what they’ve done over the past 40 years."

Photographer Nigel Yates donated many of his negatives from gigs at the time and the curators spent a lot of time contacting people in the photos to get permission to use them.

"There are some really beautiful shots from people’s personal collections that we’ve been loaned and musicians have as well."

It has required some "old-school" searching and phoning around to find people in the photographs and the search has led as far afield as Australia. Some contacted have been quite surprised to have appeared in the photos but are excited about the exhibition.

"It’s a shame with Covid that some of these people will not be able to come over and see it."

Mills says the exhibition will not only look backwards but also forward by showing the impact Flying Nun had and continues to have on the Dunedin music scene.

"The Dunedin music scene does not necessarily rely on Flying Nun anymore. There is so much more going on in the scene. It’s bigger than that now and we really want to acknowledge that.

"There is so much going on. The scene is amazing and diverse. It is still a living, breathing thing, not a time capsule."

With the exhibition open over summer, they hope people will have a chance to see it while they are on holiday.

They are sure the exhibition will pull on many people’s memories from the time and hope it might encourage people to give more of their memorabilia to the Hocken.

"Maybe they’ll go home and listen to a record they haven’t heard in a long time."

Mills and Milburn hope to be able to showcase some of the material that they could not show in an event next year, Covid restrictions allowing, as well as hold some talks and performances. 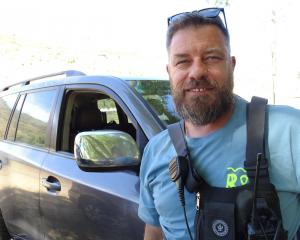