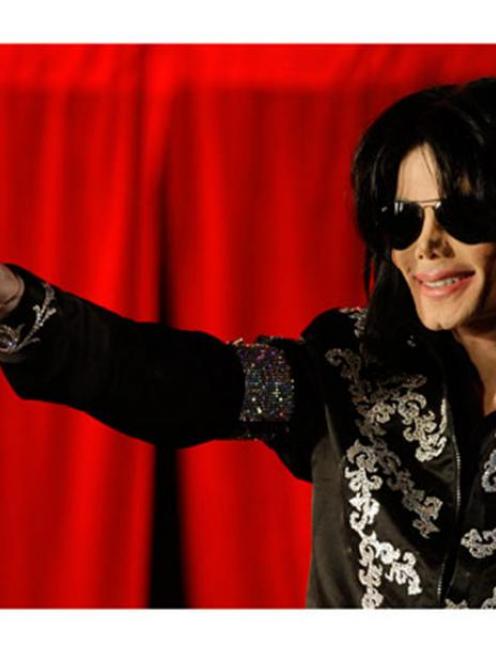 Michael Jackson at a press conference in London's O2 Arena announcing plans for 50 concerts at the venue, starting in July. Image by AP.
The knockers are circling as the King of Pop takes what could be one last shot. Harriet Ryan and Chris Lee, of the Los Angeles Times, report.

Four mornings a week, an SUV with darkened windows bears Michael Jackson through the gates outside a nondescript building near the Burbank airport.

He spends the next six hours on a sound stage in the company of 10 dancers and pop music's best-known choreographer.

The details of rehearsals for Jackson's forthcoming concerts in London are closely held secrets, but what's at stake for him is not.

The ambitious schedule of 50 sold-out shows could turn out to be the final, sad chapter of Jackson's storied career - or one of pop music's greatest comeback stories.

When - or if, in the view of many industry sceptics - Jackson takes the stage at the O2 Arena on July 8, it will be his first extended concert run in 12 years.

Doubters cite his long hiatus from performing, health problems, a one-time prescription pill addiction, age - he is 50 - and his reputation for flaking out on performances and business deals.

But the concert promoter, Los Angeles-based AEG Live, insists that Jackson is prepared and that the show, called This Is It will break new ground in artistry and sheer cost.

The production budget is "north of $US20 million", a price tag that will include as many as 22 different sets, said Randy Phillips, the company's chief executive.

"It's going to be the biggest, most technologically advanced arena show - and the most expensive - ever mounted," Phillips said.

This week, the company announced that choreographer and director Kenny Ortega, the force behind the movie Dirty Dancing and the High School Musical series, as well as Jackson's Dangerous and HIStory tours, had signed on to direct and design the shows.

Ortega agreed to work around his schedule as director of the planned remake of the 1984 movie Footloose to take on Jackson's shows, AEG said.

In a statement, Ortega called Jackson "the greatest entertainer of our generation" and said he was eager to collaborate with him again.

"My answer without a beat was `nothing could keep me away'," he said.

In Ortega, Jackson chose someone who has achieved what he could not - continuous cultural relevance after great success in the 1980s.

He tapped as the show's choreographer and associate director Travis Payne, who worked with Jackson in the mid-1990s.

Payne's recent work includes routines for Beyonce and Madonna, as well as a Dancing With the Stars tribute to Jackson.

Also involved are younger choreographers who rose to prominence translating Jackson's style for a new generation.

Todd Sams, who has worked with Usher, is collaborating on the show, a representative said, and Rich & Tone Talauega, a duo who have choreographed Chris Brown's moves, were present for auditions last month.

"They were from the elite agencies across the world - London, France, New York," said Australian dancer Nandy McClean, who was not chosen.

"There were hip-hop dancers and jazz dancers. You could tell a lot of them were crazy Michael Jackson fans who grew up watching him."

In the end, eight men and two women were selected.

Jackson attended the second day of auditions - one agency head compared the experience to basketball players auditioning for Michael Jordan.

Jackson is taking a hands-on role in developing routines, Ortega and Phillips have said.

The singer is creating a move that he hopes will be as distinctive as the moonwalk, Phillips said.

When the public last got an extended look at Jackson - during his 2005 molestation trial - he appeared in no condition for a gruelling concert schedule.

He was admitted to hospital during the proceedings, his clothes hung on his gaunt frame and at times he seemed to have difficulty walking.

He later acknowledged an addiction to painkillers.

But AEG's Phillips said Jackson had "filled out" by last November, when discussions about the London concerts began.

In preparation for the shows, Jackson is doing aerobics with a personal trainer and has had no difficulty keeping up with dancers half his age during rehearsals in Burbank, Phillips said.

Those practice sessions occur in secrecy, thanks to security patrols and confidentiality agreements.

There have been rumours, especially in the British media, that the production will include a duet with Jackson's eldest son, Prince Michael, a stage filled with Jackson look-alikes, and a cast of monkeys and elephants.

Beyond denying the last report - "No animals. No animals!" Phillips said - producers are tight-lipped about what the 20,000 fans at each concert will see.

Jackson will perform between 18 and 22 songs.

Some choreography will feature aerial dancing similar to routines by Cirque du Soleil, he said.

The concert preparation has not been spared the lawsuits and threats of suits that seem to be a given in any dealings with Jackson.

Earlier this month, he was sued by his former publicist and the actress who co-starred in the 1983 Thriller video.

This week, a New Jersey concert promoter sent a cease and desist letter, alleging the London appearances violated terms of an agreement to play a Jackson Five reunion concert. Phillips said the claim was "meritless" and had not affected rehearsals.