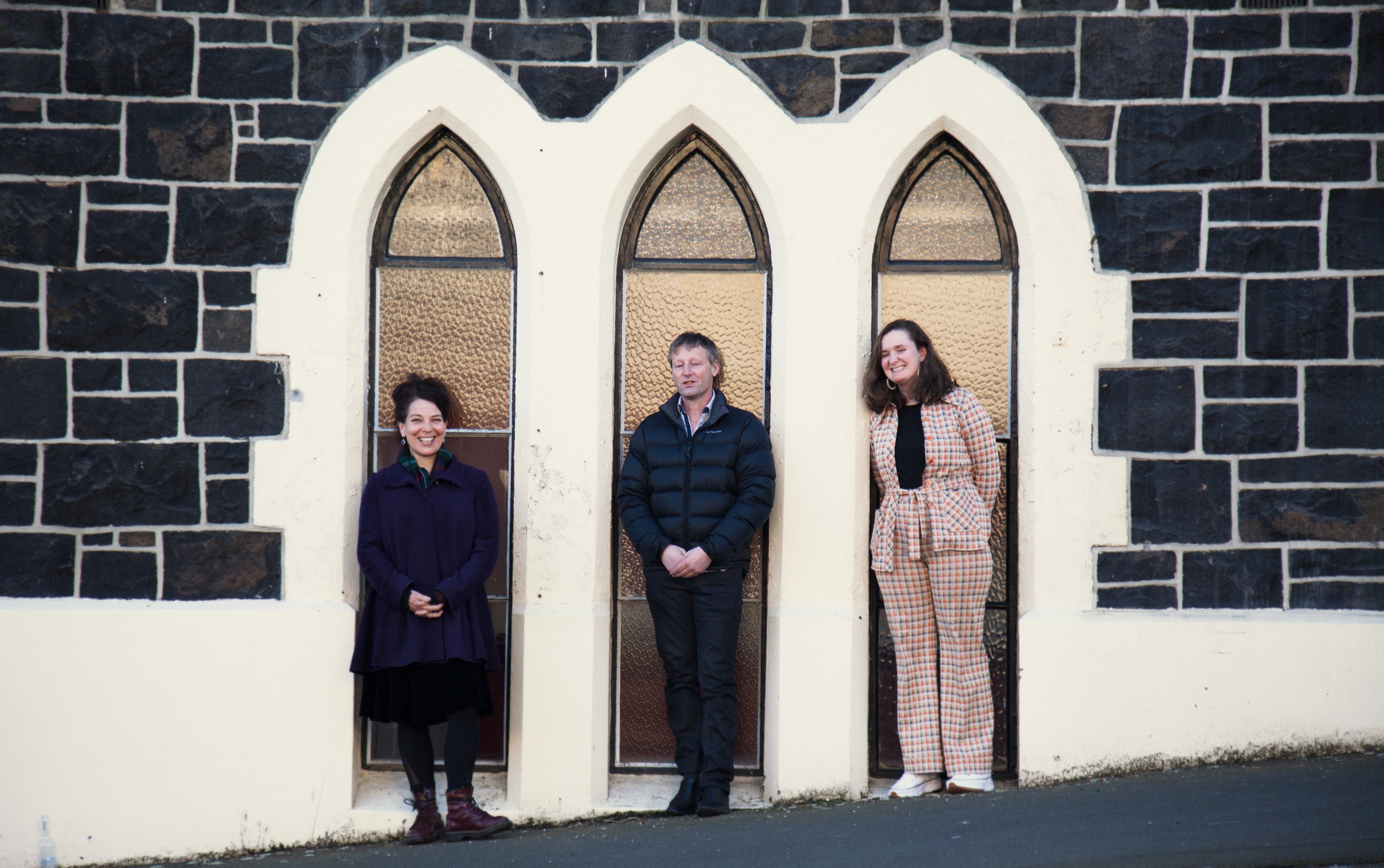 At heart they all love sharing a good story.

Amy Wright, Jessica Latton and Martin Swann have always been creative, often working behind the scenes in theatre and other productions.

Earlier this year each decided the time was right for a new challenge.

So they applied for the Otepoti Theatre Lab Playwrights Programme - a 10-week course that helps emerging playwrights develop a work with the encouragement of a dramaturg and collective sessions to support them.

The last stage of the programme is a workshop-rehearsal period with a professional director and actors, who then go on to do a public reading of the work.

That public reading is imminent for this year’s crop of programme playwrights to their great anticipation and nervousness.

She has always written - watching the musical Cats inspired her love of theatre - but it was only during university doing an honours in theatre studies that she became exposed to writing plays and started off by writing a couple of one-act plays.

More recently she has been working as a stage manager for Dunedin theatre productions and attending the playwrights’ programme sister sessions, Otepoti Writers Lab, where she has enjoyed the collegiality and exercises provided.

She had initial success with her play The Bees at the End of the World, which was one of 10 plays shortlisted for Playmarket’s b4-25 competition last year, and her work Henchmen, which was highly commended in the same competition. She also had a section of her play Sweet Girl performed as part of the 2019 Unesco Cities of Literature Short Play Festival.

It was through past playwrights’ programme alumni that she heard of the programme and thought it sounded like something she was keen to do, so she applied.

She was accepted, paired with Wellington dramaturg Angie Farrow and director Jo Randerson, and began working on her play Wish Yeti Were Here.

‘‘It’s good - a nice challenge. I wanted to challenge myself.’’

Wright has found the programme has provided a great structure to keep her on track and the advice and feedback from her dramaturg and the other writers in the programme really helpful.

‘‘The deadline has been a challenge but I’m pleased with what I’ve come up with.’’

Her play is about a yeti who goes on a journey of discovery after finding a letter from a dead hiker.

‘‘It is a journey into the human world for the first time.’’

She has stepped out of her comfort zone to write about a fantastic creature in a way that breaks the ‘‘fourth wall’’. In the past her characters have been more naturalistic, ‘‘fly on the wall’’ type stories.

‘‘I’ve experimented with a different way of writing to broaden my skill set.’’

Hearing her work read by actors is a bit nerve-racking but the idea is to get her work out there.

‘‘Live audiences and the interaction you get from that, you don’t get from any other form. It’s exciting to be heard.’’

Wright hopes to continue working on writing plays and is working on increasing her confidence to encourage people to perform her works.

She plans to apply to do a master’s in stage management next year.

Jessica Latton (Waitaha, Kai Tahu) is also stepping out of her comfort zone and trying something new.

No stranger to theatre - she is co-director of Ake-Ake Theatre Company and often directs work - Latton has immersed herself in the world of devised theatre over the years.

So rather than working to a script, Latton and her cast work together to come up with storylines in rehearsal in a more organic process.

‘‘It’s a collaborative approach informed by music, movement and design.’’

However, she liked the idea of a challenge, of writing down the words and having a mentor for the process, so applied for the playwrights’ programme with her idea for The World’s First Lovers.

‘‘I’m getting older as a dancer. Physically, your body changes how we continue storytelling.’’

Discovering her dramaturg and director would be Juanita Hepi, of Christchurch, was the icing on the cake.

They had met before and both have family connections to the marae at Rapaki on Banks Peninsula.

‘‘That this project has drawn us together is special. To work with her is an absolute privilege.’’

Latton’s play is about characters in Maori mythology, such as Tane, the god of forests and land mammals; Hine-ahu-one, who is formed from the earth; and Atua, a supernatural being.

‘‘There are stratas of storytelling from the celestial realm to the human realm with personal stories that affect us all moving through it.’’

Woven through are stories about people she has known over years of living in Dunedin that came to her in the writing process.

‘‘Between the godly realm and these stories, there are these small intimate moments.’’

Her inspiration came from a dance workshop she did with Ngai Tahu dancer Rachel Ruckstuhl-Mann.

‘‘Moving like that was quite life changing. It became a real challenge how to translate that deep, profound movement into language and then translate that to actors and to be able to connect with an audience.’’

Her yoga - she owns her own studio - cycling, and being out in nature all help her thinking and development of her work.

‘‘I’d be meditating, imagining what it would be like being created for the first time.’’

Despite it being a different way of working from what she is used to, she is loving it and is not unfamiliar with the process.

‘‘Juanita is a fount of understanding of Maori storytelling. She encourages me to look at things. It opens up doors for me. It’s exciting.’’

It is the first time she has handed a piece of her own work over to another director to be staged.

‘‘You can’t hold on too tight. It’s way better to open it up to all their skill and magic.’’

Martin Swann is more used to penning poetry than plays.

However, after joining the Otepoti Writers Lab sessions, the Mainfreight manager decided to explore other forms of writing.

As part of that he thought he would do a submission to the playwrights’ programme more as an exercise than anything.

No stranger to theatre, Swann along with wife, actor and director Ellie, opened the Athenaeum theatre, where he works doing the lighting and sound.

But writing a play required a different approach to poetry, he says. It meant not just writing text but movement and interactions between characters.

‘‘Writing poetry is normally a quite a solitary practice, so this is the first time I’ve collaborated but I’ve enjoyed it.

‘‘I like being able to explore the dynamics between people and play with that. I’m a creative person, so there is no limitation, really.’’

It also meant he has had to leave his technical hat in the theatre.

‘‘At the start I thought ‘how am I going to stage it, light it?’ Then I kind of had to forget about that and think it’s not my job - it’s my job to write the script then give it to someone else to stage.’’

He has been paired with Christchurch dramaturg Carl Nixon and Dunedin director Alex Wilson.

‘‘It was daunting at first, but everybody involved is really nice and it’s valuable to get feedback as it improves your work at the end of the day.’’

His play Unspoken is about toxic masculinity, identity and expectations of what a Kiwi bloke should be.

‘‘It’s a topic that interests me, not being a typical ‘‘man’s man’’ myself. Why it has been defined that way has always interested me.’’

It has been a bit of a juggle with his work being busy during lockdown and trying to write at the end of busy days.

‘‘But I love it. It’s quite freeing and I like a challenge.’’

He would love to continue writing plays and has ideas for short stories as well - it was a short story that inspired the toxic masculinity theme for the play, he says.

‘‘Theatre is a powerful way to get your ideas out there but putting yourself out there is quite unnerving. I’m looking forward to seeing it in real life.’’

The Otepoti Playwrights Programme and the Otepoti Theatre and Writers Labs are initiatives set up in 2019 by Dunedin theatre company Prospect Park Productions, run by HJ Kilkelly and Emily Duncan.

The company specialises in new work development and creating and facilitating platforms for local theatre artists and writers as well as the Dark Dunedin podcasts and theatre productions.

As part of that the company has set out to provide a home for Dunedin creatives by taking the lease on office and workshop space in the Carnegie Centre.

Kilkelly said with the Fortune gone, Dunedin lacked a focus for theatre and workshop and rehearsal space, so they set about creating a space where creatives could drop in to chat with others as well as host sessions for writers.

They have secured some funding from the Dunedin City Council and hire out the spaces to those outside the sector, which helps with some of the bills.

With the sector continuing to struggle in Covid-19 times it is even more important for the arts and its creatives to be supported to continue their work, she says.

They were able to continue the writers’ labs and playwrights’ programme online during lockdown.

Seeing the playwrights’ work come to fruition is Kilkelly’s favourite time of year.

‘‘We’ve got an incredible programme with three new writers.’’ 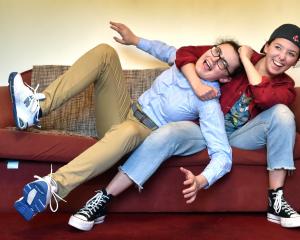