'No regerts' coming home to Dunedin 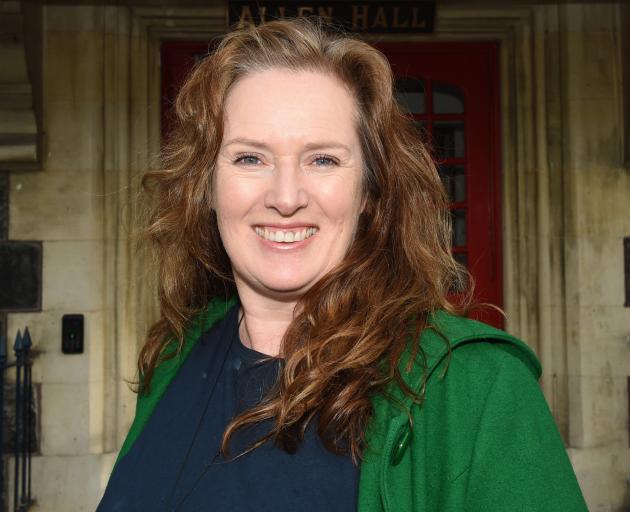 Lara Macgregor has put her suitcase away to direct a Dunedin production of The Flick, by Annie Barker. Photos: Gregor Richardson
After four years of travelling for work, former Fortune Theatre artistic director Lara Macgregor is relishing the rare opportunity to work in her hometown. She tells Rebecca Fox about her first play back in Dunedin.

From the ''No Regerts'' advertising campaign to treading the boards and directing the action - there is not much Lara Macgregor has not done in the past four years.

Macgregor made the decision to become a ''freelancer'', giving up the security of a full-time job at the former Fortune Theatre, back in 2015.

She continued to live in Dunedin but has been accepting work all over the country, finding roles in Christchurch and Auckland mostly.

''I was here 100 days last year and have been away for four months already this year.''

It was being asked to direct a play for Dunedin's Wow Productions that has seen her put her suitcase away for a few weeks.

She chose The Flick, by Annie Baker, one of Broadway's most prolific female writers in the past decade.

The Pulitzer Prize-winning (in 2014) drama appeals to Macgregor because it is clever.

''She likes to play around with the audience about the concept of what a theatre-going experience might be like.'' 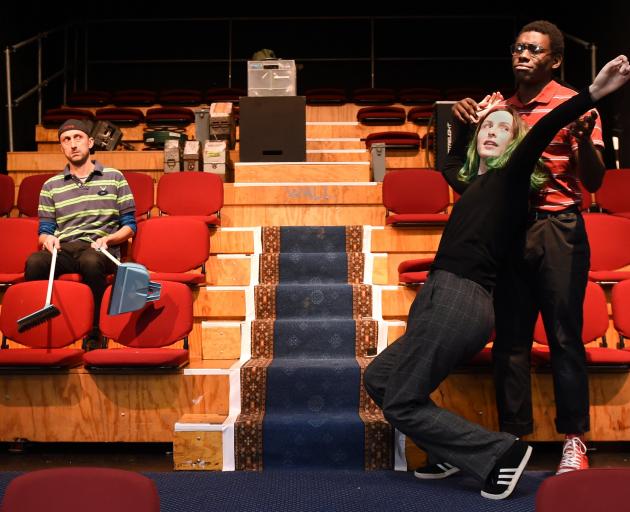 Rehearsing The Flick at Allen Hall are (from left) Nick Dunbar (Sam), Sam Shannon (Rose) and Timothy Itayi (Avery).
Baker is also very ''subtle and delicate'' with her script.

''It is not a high drama. More of a simmer, like watching a pot boil. It's a comedy of the mundane as you watch three people go about their average working lives.''

The story involves three underpaid employees in a run-down movie theatre in central Massachusetts, as one of the last 35mm film projectors in the state is about to be taken over by digital technology and a national chain.

''They're all movie nerds in a way, with a deep passion for film.''

Barker's plays have not been performed in New Zealand before, so the Dunedin production will be The Flick's premiere in the country. Coincidentally, it opens at the same time as the premiere of another of Baker's plays in Wellington.

''We're joining forces a little bit on social media to promote that.''

From a director's point of view it is an interesting play to stage, as Baker has very strict rules about how her play is produced.

That means one of the actors has to be an African-American, another has had to dye her hair green and changes to the music were not an option.

While they wanted the cast to be from Dunedin or have links to the city, they were aware finding an African-American actor in the city might be difficult.

''It couldn't be a Maori or Samoan, it had to be African-American, so we brought Tim Itayi down from Auckland.''

Sam Shannon, a student at the University of Otago, was cast as Rose and former Otago student Nick Dunbar, who grew up in Otago, came back to the city for the piece.

To create the ''movie theatre'', Macgregor has called in Mark McIntyre, whom she has worked with a lot in Christchurch, most recently on last year's Elling, at the Court Theatre.

''He's kindly come down to do the design. The projection booth is going in this weekend.''

The audience is essentially the screen and at certain points in the play scenes from movies will be projected over their heads.

For Macgregor, the play is ''very contained'' and less technical than some of her recent works on bigger stages.

''There are no moving bits of furniture; I've only got to move the actors. It's tiny, it's like I'm in one of those Brownie cameras.''

The cast has spent time with Russell Campbell and has seen how the Regent Theatre's projection room worked.

''Sam and Tim have learned how to thread film into a projector and how it operates.''

While Macgregor would have loved to use a real projector in the play, it was not practical given the size of their ''projection room'' and the time it takes to disassemble the equipment - something that happens in the play.

As the characters are mostly film nerds - especially Avery (Itayi), who has an encyclopedic knowledge of movies and is essentially a film snob - the cast have had a DVD night to brush up on some of the references.

''There is a lot of competitive banter between Avery and Sam. They're always one-upping each other. They play that game 'Six Degrees of Kevin Bacon' a lot.''

One of the great things about the project is being able to go home every night after rehearsals, Macgregor says.

Not that she has not enjoyed being able to utilise her skills in both directing and acting since she left the Fortune.

The ''biggest and most rewarding'' project in that time has been directing The Curious Incident of the Dog in the Night-Time at the Court Theatre. It is an old Sherlock Holmes story about a young boy on the autistic spectrum whose dog is murdered and he goes off in search of the murderer.

Another highlight was her role as Annie Wilkes in Stephen King's Misery at the Court Theatre.

''It took three months' vocal and physical training for that. I had to drag men across the stage and I can still feel my shoulder from swinging the sledge.

She has numerous projects lined up, including directing her first musical, Rent, and starting up a summer Shakespeare programme in Dunedin with Jessica Latton and Kim Morgan.

They have received funding to hold auditions and workshops and to pay five professional actors, the rest being students or amateurs, but still need more funds to make the full project a reality.

She also has funding for an all-female-cast-and-crew play, Di and Viv and Rose, to be performed in Dunedin in November.

Straight after The Flick she will be heading to Wellington to perform in political thriller Burn Her, by Sam Brooks, with Sophie Hambleton, Jean Sargent and Andrew Laing.

Having a few projects coming up in Dunedin means she will get to spend more time at home and with partner Phil Vaughan.

She appeared in a television advertisement with Vaughan as her husband that has been running for about two years. That appearance led to the couple being offered roles as husband and wife in a feature film This Town (to be released soon).

''That was cool. It's really rare to get that opportunity. So there have been some fun acting gigs as well.''