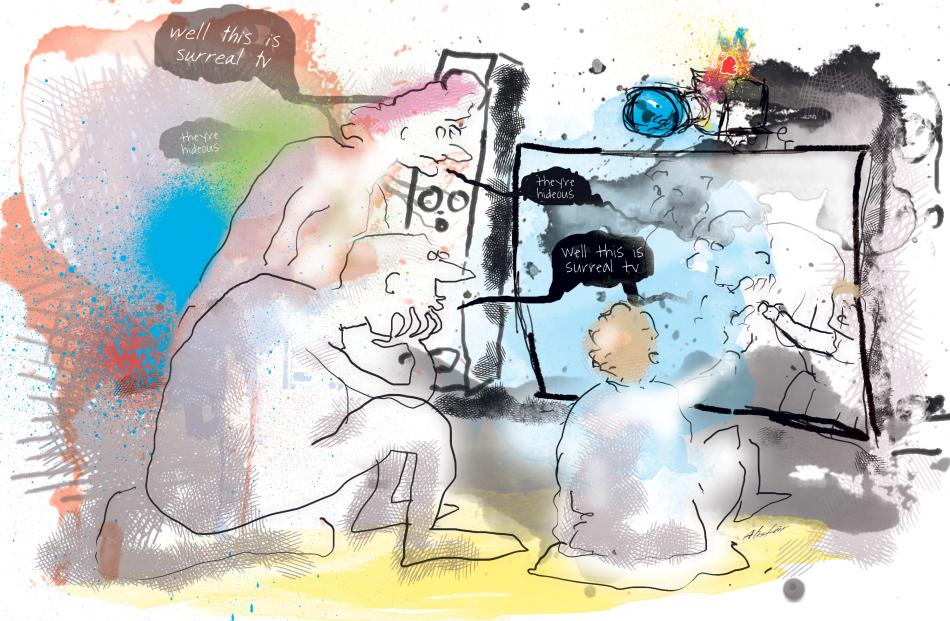 At the push of a button, eight obese men and women are illuminated leaning on a poker table.

The stakes could barely be higher.

In front of them sits piles of chocolates of many descriptions.

One woman, asked whether she would like to play chicken with her health for "immunity", is clearly tempted.

A retrospective voiceover from another competitor cuts in.

"It was Amanda's turn to have a bet. She was looking at that chocolate, and she really wanted to have a bit."

Then came a flashback from the "leading" man.

"No-one was playing. I was leading on 62 calories."

"I've never gambled on poker and I'm not starting now," she said.

That left two brothers, supposed partners in this bloody mess, to battle it out for individual immunity.

"How much do you like that walk?" said the older of the two, referring to the track leading to a reward for the challenge's victor.

"I don't mind it," replied his younger sibling.

Big brother repeats his query: "How much do you like that walk?"

Little brother shoots back, with feeling: "I love that walk."

Another voiceover follows, with the older brother proudly revelling in his glorious victory.

"It's very easy for me and Andrew to do this. I got away with immunity for 124 cal.

Before readers level claims of sadism against this publication, it is important to note that it had nothing to do with the formation of the scene detailed above.

It appeared on free-to-air television, on The Biggest Loser, on a Thursday morning earlier this year.

And somehow, considering what passes for TV these days, forcing fat people to jump through hoops of chocolate for health and money seems tame.

Now, mass messages, saturated by advertising, emanate from inside hideous prisms in countless corners, through twisted smiles creasing faces which look to have been fashioned by Juan Gris out of leather.

Men adorned with suspicious muscle, and women with more ornaments hanging from them than Christmas trees, abuse substances, scream, fight and fornicate.

Food is fetishised to the point where it seems every second show features rock star chefs, and every other one, swollen, greedy eaters who have indulged too much.

Senior Otago University media, film and communication lecturer Brett Nicholls said those trends were symptomatic of the increasing preoccupation with the youth market, which the television industry saw as offering the biggest returns for advertising revenue.

"Programming has tended to reflect this," he said. "The reality TV format; though we would have to say that there is no pure reality TV format: the industry favours formats such as the reality-gameshow, reality-soap ... work in the form of a narrative hook, allowing for the seamless integration of advertising and product placement within "everyday" life situations, much more than drama.

"The Big Brother prototype show is a case in point: the house consisted of clearly displayed brands.

"In a tight market, where advertising revenue is difficult to come by, the reality TV format enables paid advertising screen time to be expanded beyond advertising slots."

Especially since the 2007-08 Writers Guild of America strike, reality TV "has been utilised as a weapon against unions at the industry level", he said.

"There is no question that the industry had to respond to [the writer's strike] and that reality TV served as a stop-gap.

"On balance though, we would have to consider this question in terms of the general hostility toward unions and forms of collective action that characterises neoliberal forms of governance - John Key's labour law reform for Warner Bros is a case in point.

"Media corporations, like so many corporate industries, have worked to free themselves from unions and worker groups.

"In so many respects, reality TV can be read as an ideological support for the corporate view of life.

"With its emphasis upon individual consumption and self-preserving strategy within competitive environments, rather than forms of collective activity, reality TV is a kind of reflection of the ideals of corporate life."

The New Zealand television industry struggles because it exists in a tiny market, Mr Nicholls said.

"Television drama is very expensive to make, so New Zealand buys in most of its drama programming and relies upon cheaper formats such as reality TV to reflect New Zealand peoples and interests."

He added, however, that it is difficult in general to assess the health of domestic and international film and television industries, which tend to be cagey about their financial state.

"One of the reasons for this is that they can't afford to appear to be doing too well, particularly in an environment in which intellectual property is a central issue," he said.

"I think that media conglomerates tend to understate how well they are doing, particularly if all of their revenue streams are taken into account."

The paucity of scripted drama and comedy, on free-to-air television especially, is striking.

On the randomly selected day of November 22, Channel One, Two, Three, Four and Prime, which all run 24 hours a day, had a combined total of 23 hours of scripted, fictional television.

Channel Two had the most with seven hours and fifty minutes, but that included two episodes each of Shortland Street and Neighbours, and mainly comprised reruns of syndicated American shows like My Wife and Kids, Friends, Scrubs and Ghost Whisperer.

Channel One had the least, with just two hours and 20 minutes of content in which the principals pretended to be someone they were not.

Those trends are reflected in TV ratings.

Current James Bond star Daniel Craig recently rallied against the diminished quality of an entertainment industry which increasingly celebrates absurdity at the expense of ability.

In particular, he took aim at the hypocrisy of media courting celebrities' pleas for privacy.

"We were at your birth. You filmed it for us and showed us the placenta and now you want your privacy?

"All I have to do [to be successful] is behave like a f***ing idiot on television."

Reality TV's Kardashian clan then came in for special consideration.

"It's a career. What can I tell you? It's a career, I'm not being cynical. And why wouldn't you?"Look at the Kardashians, they are worth millions. Millions! I don't think they were that badly off to begin with but now look at them."

There is no doubt that reality TV has made things difficult for actors, directors and writers, Mr Nicholls said. "And on top of this, television increasingly competes with other entertainment media - internet, videogames ...

"No-one really knows what shape the media will take in future years. It looks as though media is moving in the direction of some kind of integrated system.

"From the perspective of media professionals, these days writers, directors, actors have to be versatile, and prepared to work across a number of mediums."

For many it may already be too late.

Surreality is taking over.