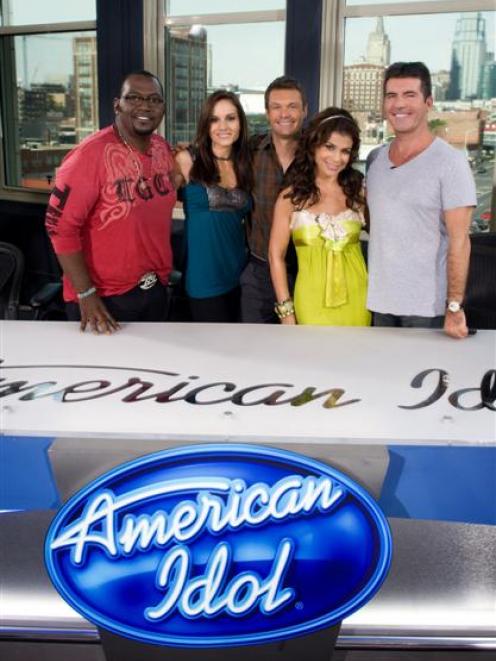 Since its inception, the United States' leading entertainment juggernaut, American Idol, has redefined the landscape before it.

But this season it will test a new show-business frontier: Can a prime time show dominate in its eighth season on air?

For Idol, which premieres on Friday, ratings are of paramount concern because it will never be enough merely to survive or cling to its primetime slot.

It has demolished virtually all comers, except for crime drama NCIS, and it must continue to overpower once again or risk losing its uncanny ability to coin genuine (not the 15-minute variety) stars each season.

In a recent interview, executive producer Ken Warwick said: "Our challenge is to keep it as interesting as it's always been, put in some changes that keep the whole thing bubbling and buoyant, and just keep people interested.

"The biggest problem is that it's been on television for eight seasons. This is the eighth. What do you change?

"If you are any good at your job, after the third season you've honed it as well as you know how, really.

"There's the question of how do you change it without destroying what you've got. In truth, the biggest problem will always be, from now on, keeping it fresh."

This season will see the biggest changes to the Idol format since the show's first season.

Already announced and widely publicised is the addition of a fourth host, Kara DioGuardi, a Grammy-nominated songwriter from New York who has written songs for and with Christina Aguilera, Celine Dion and Gwen Stefani.

Since the birth of Idol, the three-judge formula (expert, nice, mean) has become so ubiquitous it's easy to forget Idol actually invented it - that it was not just present in nature when Idol was born.

With the addition of DioGuardi to the panel, Idol has taken the most celebrated, road-tested formula in all of show business and thrown in a dose of hydrochloric acid.

What will happen? Who knows.

On-air chemistry can be like lightning in a bottle, something hard to capture or replicate, but Fox's head of alternative programming Mike Darnell believes that DioGuardi will actually heighten - not detract from - the show's original elements.

"So what it's doing is really adding to the group dynamic. Just by having a good fourth person in there, everybody's comments are changing.

"They are saying things they didn't say in years past."

Darnell also promises that the male-versus-female dynamic will become more pronounced this season.

But the introduction of DioGuardi is one of a host of alterations made to the show.

This season there will be a shuffling of the mid-round rules - including a wild-card round - two full weeks of the high-tension super-drama of "Hollywood Week" and the use of more backstage footage to underscore the young contestants' emotional agonies.

"We're going back to sort of a raw feel," he said.

In the middle rounds, after singing and being judged, the contestants will immediately be confronted by host Ryan Seacrest rather than being allowed to retreat backstage as in the past.

"So you see if they're upset with what Simon said, you get to see it right away instead of them going backstage," Darnell explained.

The changes to television's lone giant also came about to address another issue: The show is ageing.

"Change is important. As long as you don't change the core of the show, little changes can make a big, big difference.

"What it says to the audience is we're not out of gas," he said.

"Imagine a scripted show that was in its eighth season; you'd do some fictional changes, some new characters, whatever it may be - and this is our version of that.

We just know it's the biggest show on TV, and we better not rest on our laurels because the audience will become apathetic with you."

Asked if we will be seeing cat fights and Big Brother-like intrigue, Warwick answered, "I'll put it this way: If it's there, then, yes, we will show it."

And we will all be watching - for at least one season more.

American Idol returns to TV2 at 8.30pm on Friday.