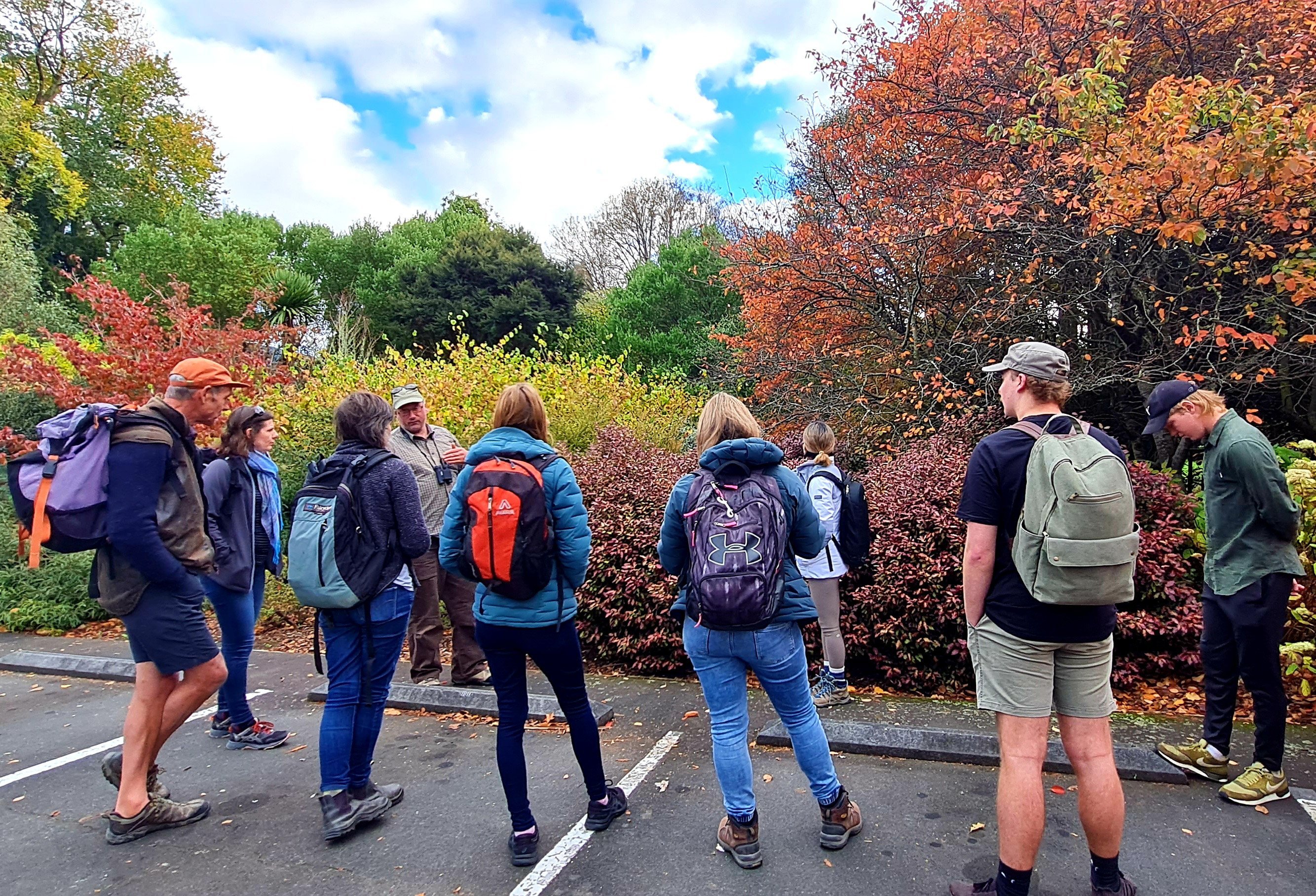 When Peter Langlands first started professional foraging, many people did not know what it was. Now it is becoming an increasingly popular, competitive and secretive business.

It is also facing pressure from increasing urban development and agricultural intensification spreading out to the edges of cities and towns which have traditionally been rich pickings for foragers.

So he says there is no better time than now to forage.

When Fresh first talked to Langlands about five years ago he had turned his passion for foraging, developed while hunting with his father as a boy and as a marine ecologist, into a job by providing foraged foods to top restaurants such as the former Roots in Lyttelton and Amisfield at Lake Hayes.

He now also holds foraging workshops, classes and tours around the country, including in Dunedin, and contributes to national databases recording foraged food finds.

"After five years I’m still finding new foraged foods that you can eat."

One of his advantages is his science background and skills in taxonomic identification of species which enables him to contribute to the crowd-sourced database iNaturalist.

His information guides also give interested foragers a starting point of what to find within a 25km radius of their cities.

These days many chefs do their own foraging — some taught well by Christchurch-based Langlands himself.

"It’s really rewarding when you get out and do it yourself."

But to forage commercially, people needed to be licensed, an important step to help ensure chefs do not feed their customers something poisonous.

"We do not want a mistake. I’ve never had a food safety incident relating to foraged foods."

For five years he has been working with chefs at Amisfield, including current top chef Vaughan Maybee, training them up to forage.

"He has a real level of expertise now."

Langlands still keeps an eye out for foods that are suitable for Amisfield when out foraging.

"I found a whole lot of wood sorrel growing yesterday when I was looking for porcini mushrooms, so I’ll send that off today to them."

Climate change is adding another challenge to the foraging endeavour, as it means different species are flourishing or declining than have been found in the past.

"It keeps you on your toes. There is not a lot of certainty in it."

This year, porcini mushrooms are flourishing under pine trees as are a new find, wood blewit mushrooms, which have become very popular, he says.

"They are a firm mushroom with an aromatic flavour. They hold together well, have a citrus woody tone which is unique but not overpowering." 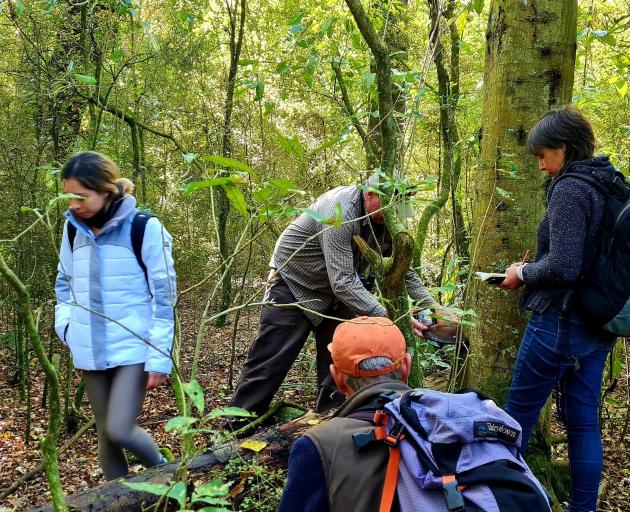 Mushroom foraging in Dunedin. PHOTO: PETER LANGLANDS
The majority of New Zealand’s edible mushrooms are imported varieties with only about eight native.

Finding spray-free verges to forage in is also becoming harder, although Langlands says Wellington is great for foraging as it has a lot of green zones and not much spraying.

"It’s certainly the capital for foraging in New Zealand for its quality and diversity."

Otago Peninsula and Banks Peninsula come close, but in the main the best opportunities for foraging are in the main urban centres, he says.

"There is more diversity and a lot of micro-climates."

There are not many areas of countryside or forests that are not sprayed in some way these days and those without predator control are stripped by pests.

"They’re too degraded. The berries, fruit are just not there."

It is also illegal to forage on conservation land without a concession.

One of Otago’s greatest resources is seaweed, but it cannot be harvested commercially even though it is really sought-after by New Zealand chefs.

"The fishing regulations prohibit its use which is ridiculous. It’s really held back innovation."

He sees Southland as a new frontier in foraging.

"Southland has a huge range of wild resources that I see being developed in the next few years."

A new aspect to the business is the idea of propagating and cultivating some of the rarer plants by simulating the soil and conditions they grow in.

"There is scope to explore this idea for greater seasonal availability."

It would also help reduce food mile concerns if more food could be grown closer to where people live.

While foraging initially grew popular as a rebellion against big corporates controlling the food chain, there was more environmental awareness these days and greater support for local initiatives, he believes.

Langlands says foraging is an important way for people to connect with their environment.

He has found his experience with foraging has ruined eating out for him as he craves more innovation in his food where chefs tell a story with their creations and are passionate about what they are serving.

"Foraging takes things to the next level. But outside of the top 100 [restaurants] they don’t have the capability or resources to do it."

A great supporter of wild food events, Langlands believes getting together to share wild food experiences is important.

So with his own foraging tours and events he likes to have a shared lunch as a way to "anchor" people in the experience of foraging for their food and cooking it.

"It grounds people in knowledge that rather than just the theory of picking it, they can use it themselves. The education side is really important and it breaks the day up."

He also advocates that, whenever getting out into nature — whether it is tramping, fishing or hunting — people should remember to take some containers and be aware of the flora around them.

However, it was now a more competitive market, with others also foraging professionally.

There is a lot of protectiveness about productive sites. Langlands has experienced another forager wiping out a mushroom growing site after finding out Langlands was taking a tour in the area.

Sites are also being wiped out by development. Langlands’ favourite elderflower foraging spot has been bulldozed.

"A lot of berms are disappearing along edges of roads and rivers. There’s not much room for nature in some of these places anymore."

While he spends more time on his computer these days, he says nothing beats the excitement of finding something new when out foraging.

He believes there also needs to be more awareness about the rarity of some foods and the need to conserve and share resources. Being aware of water quality is another issue.

"It’s not about going all out to fill the freezer — that’s old school way of thinking."

Long-term, Langlands hopes to concentrate his foraging business out of Christchurch and especially on Banks Peninsula and look at ways he can give back to the environment that supports him.

• Peter Langlands’ partner, Jackie Phillips, likes creating in the kitchen with foraged finds. She shares a couple of her recipes. 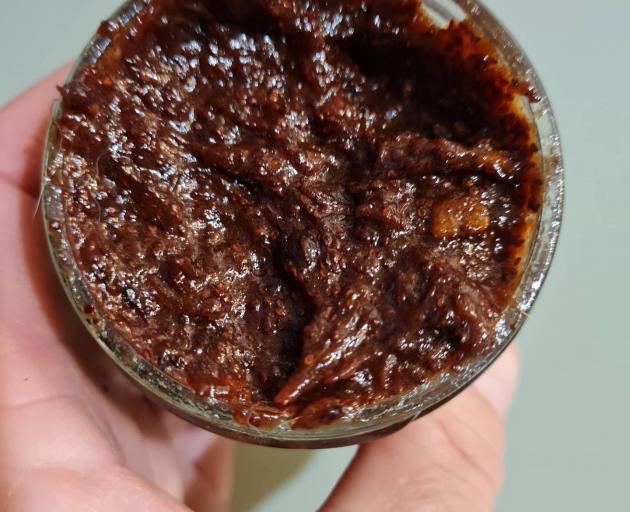 1 whole lemon, cut in half and pips removed 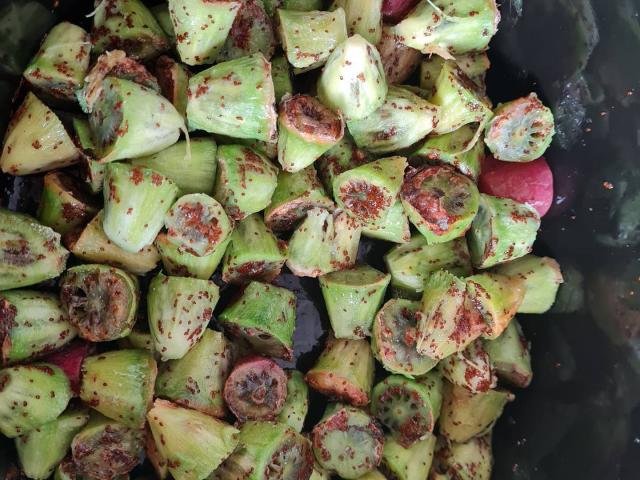 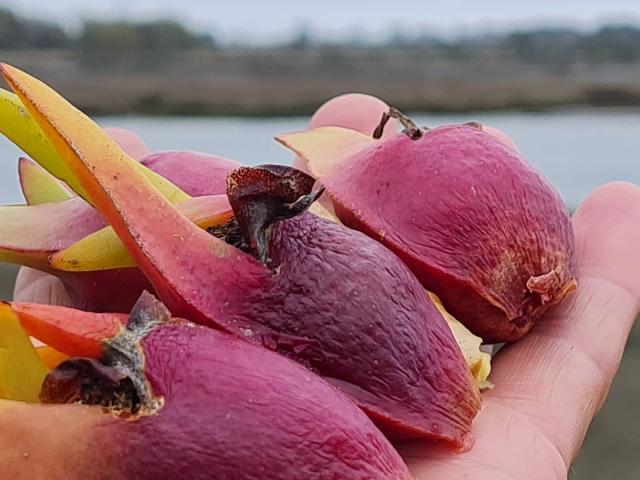 1. Slice off the top and bottom of the ripe sea figs, then peel the red/ yellow outer skin until a green ‘‘fig’’ is revealed (see photos).

2. Place all ingredients in a slow cooker and cook on high until everything is mushy (approximately 2 hours).

3. Using a stick blender, blend all ingredients together, then cook on high with the slow cooker lid removed until the consistency reaches a spreadable paste (approximately 1 further hour).

4. Allow to cool slightly before spooning into sterilised jars. Serve on a cheeseboard. 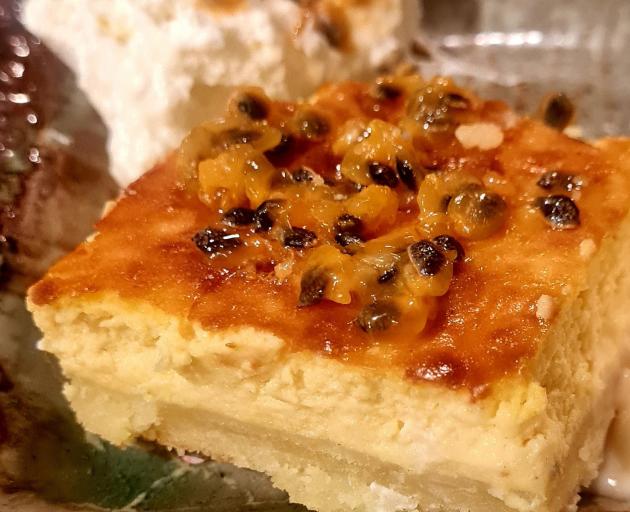 1. Melt butter and mix in icing sugar and flour.

2. Press into a tray lined with baking paper.

3. Using an eggbeater, combine all topping ingredients and pour over the base.

4. Fan bake for 30 minutes at 180degC or until the middle of the cheesecake is no longer wobbly.

5. Top with the pulp of a few whole banana passionfruit. 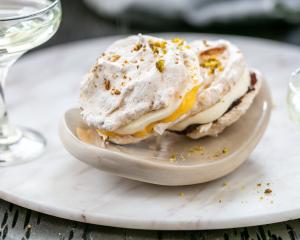 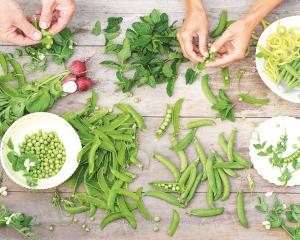 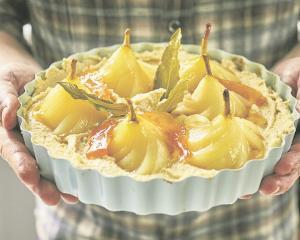 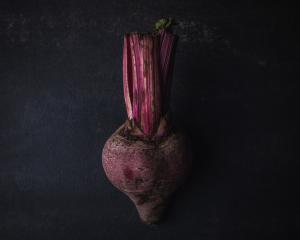