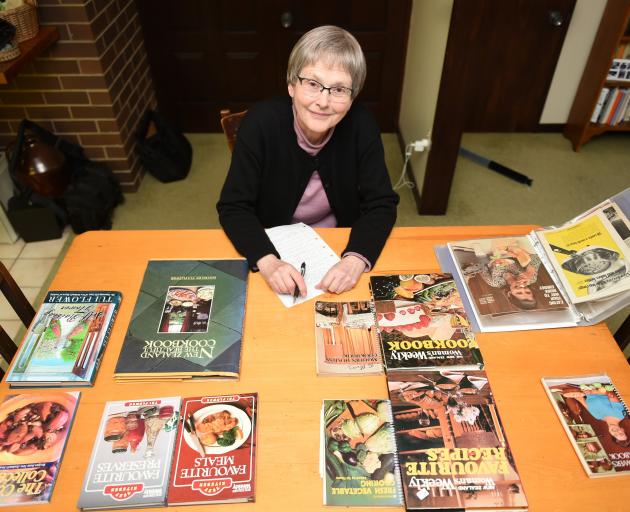 Emeritus Prof Helen Leach with some of her collection of Tui Flower recipe books. Photo: Staff Photographer.
Tui Flower was one of New Zealand’s early food writers who helped break the country’s meat and potato mentality. After her death last week Rebecca Fox discovers how much she meant to foodies.

Described as the ''doyenne of New Zealand cooking'', the late Tui Flower will be remembered for influencing the country's cooks during a time of change.

Flower, who trained at the University of Otago in home science towards the end of World War 2, became widely known in New Zealand. Her advice and recipes reached the furthest corners through her columns in newspapers and the New Zealand Woman's Weekly.

''She was one of the handful of food writers who guided New Zealand home cooks through a period when our kitchens underwent revolutionary changes.''

Unlike Aunt Daisy, who compiled her cookbooks from contributed, untested recipes, Flower developed and perfected her published recipes in test kitchens.

After graduating, Flower accepted a job at Pukekohe High School, but took leave in 1951 to visit the United States, where she attended some Cordon Bleu courses before returning to New Zealand. Flower then studied in France at the Ecole Hoteliere.

''Together with her US experience it gave her an insight into continental and American cookery that would later prove invaluable in adapting international dishes for New Zealand consumers.''

Flower flourished when she moved into food journalism at the Woman's Weekly in 1965, said Prof Leach.

''She had the scientific training required for recipe testing, and practical experience with many types of kitchen appliances and tools. She adjusted classic New Zealand recipes for busy housewives and working mothers, explaining how they could be cooked in electric frypans and automatic ovens.''

Flower also modified continental and Asian dishes to suit the restricted range of ingredients then available in New Zealand.

''Her recipes were practical, economical and nutritious. She helped New Zealand households break the meat-potato-vegetables pattern that had defined our main course at dinner and driven our culinary creativity into the realms of puddings and baking.

''Above all, she made us proud to be home cooks.''

Leach has 19 publications by Flower on her bookshelves from her cookbook first published in 1968 to her memoir Self-Raising Flower that appeared in 1998.

''I treasure and trust them all.''

''Tui was always most hospitable. One of my strongest memories is of her unique kitchen within a kitchen.''

When Flower moved into her grandparents' house, she designed a new kitchen within the large traditional one, which maintained its coal range and large table.

''Tui is truly the doyenne of New Zealand cooking.''