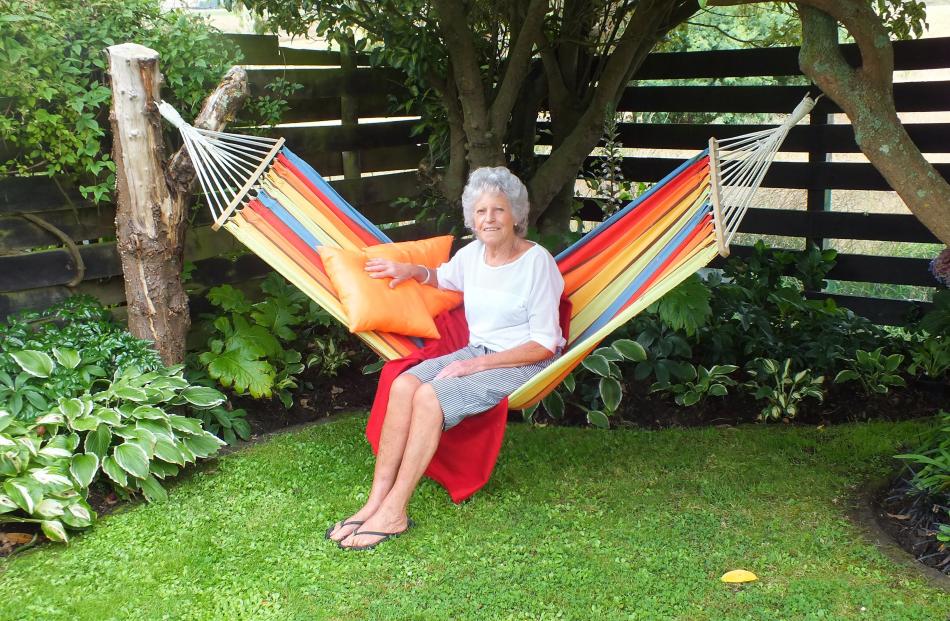 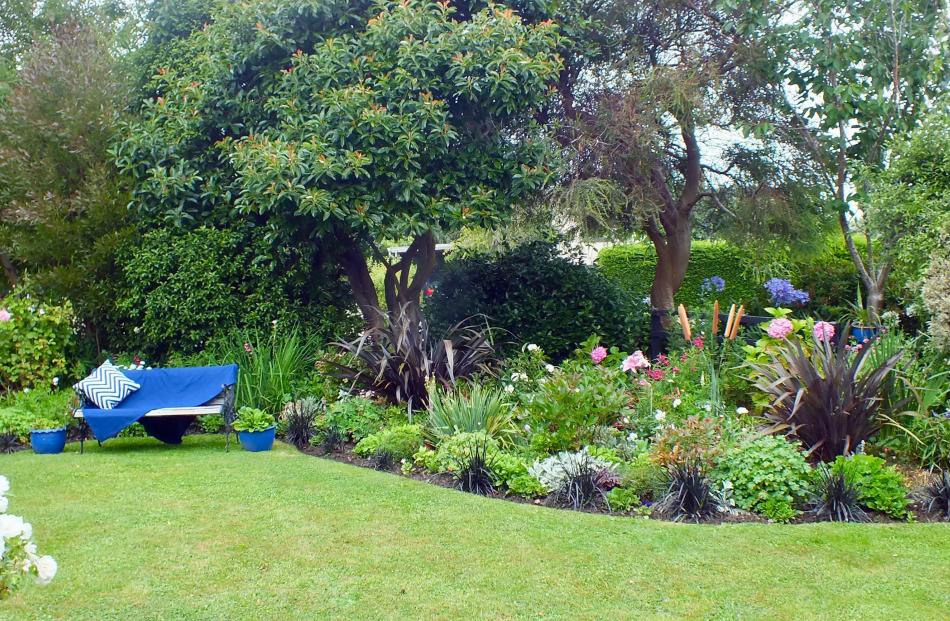 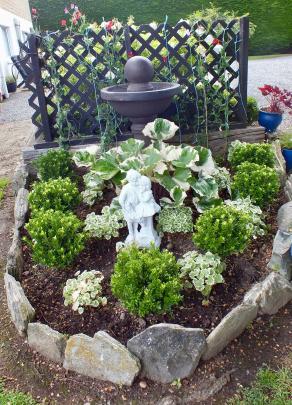 The small hebes in front of the water feature are being pruned into formal balls. 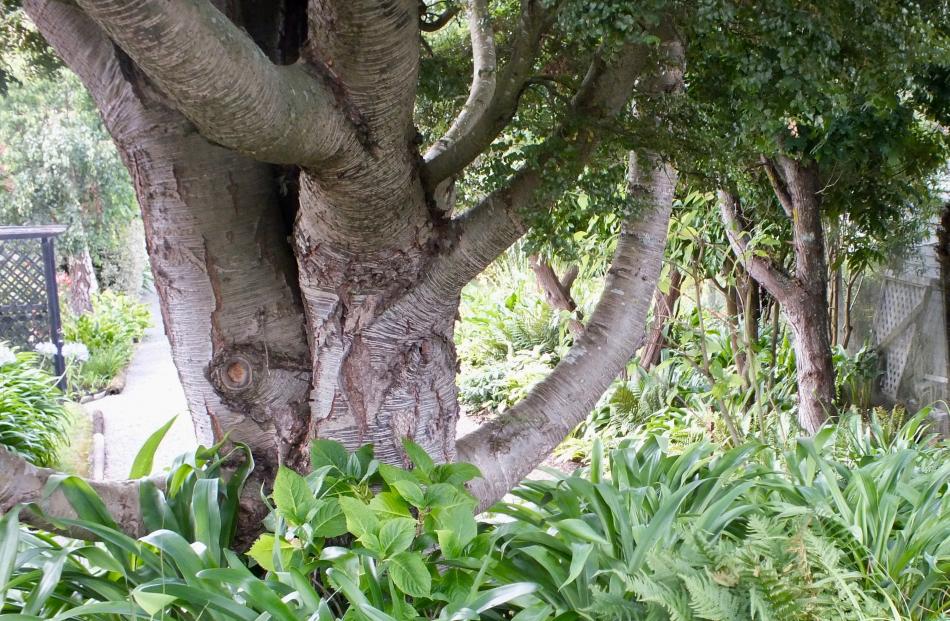 One of the original trees is this large native beech, carefully pruned to show off its silvery trunk. 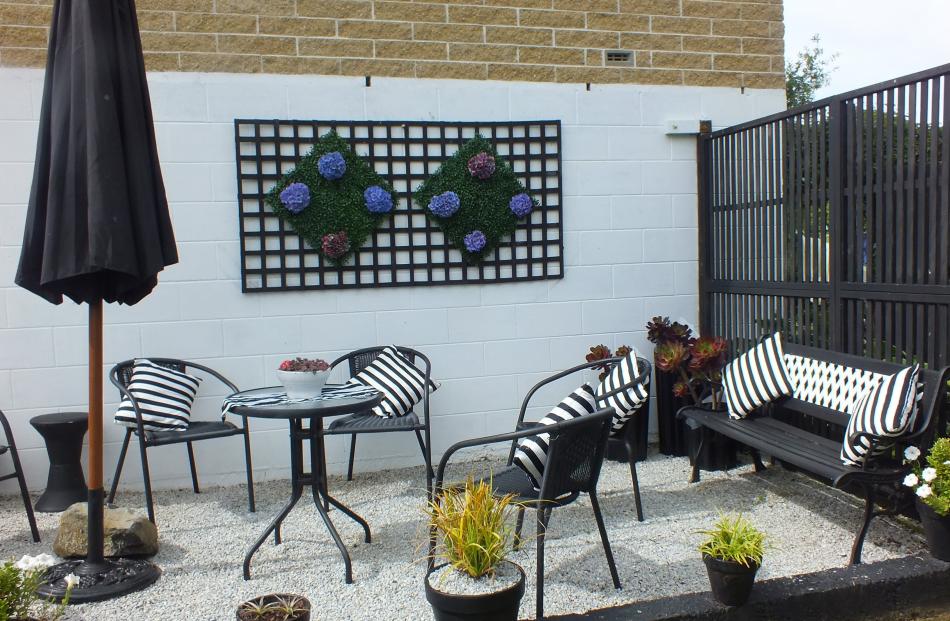 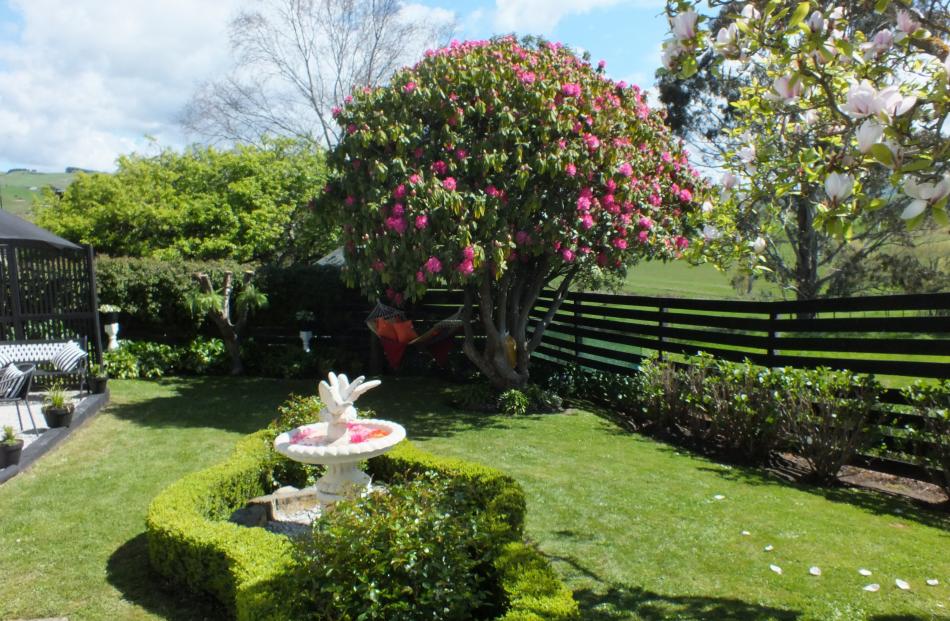 A rhododendron adds colour in October.

Daphne Turner describes her 0.2ha garden, the culmination of 20 years' effort, as semi-formal.

"It is all garden rooms, isn't it? Each flows into the next. That's the way I like it," she says.

When Daphne and husband Russell moved into their Karitane house, there was very little garden.

"The big trees were here but really nothing else except a row of flax on one side and pampas grass on the other. We had to use the tractor to get them out," Daphne says.

"And we took out some willows that were horrible."

Later, they removed some more trees that had been planted too close together and created a shady walkway lined with hostas and rengarenga lilies (Arthropodium cirratum).

"Russell built all the fences and archways for me, so I had the bones. Then I went around and laid out the hose [to mark out areas], the way you do," Daphne says.

"I started with a cottage style when it was so easy and cheap to get the plants but if I was beginning now, I would have started as I now mean to finish and would do it all in green and white. "

"I really like vivid greenery and white. I love white."

Lush greenery forms the background and there is white everywhere - daisies in a wheelbarrow, spiky dahlias among hostas, the white form of the Kaffir lily (Schizostylis coccinea), agapanthus, roses, dozens of lilies, clematis and a large magnolia. Even a large plum does its bit, with an explosion of white flowers in spring.

Linking the green and white are numerous plants with variegated foliage, among them geraniums, hostas and prettily blotched ligularias (Ligularia reniformis), one of four varieties Daphne grows.

This summer lilies did especially well.

"They were absolutely fabulous but they were over in five minutes," she says.

Lifting the green and white are accents of blue, red, pink and orange - a few azure agapanthus, cobalt throws on lawn chairs, scarlet cutting-grown roses, a blush-coloured Activa lily and a handful of tangerine day lilies (Hemerocallis). In spring, a large rhododendron adds a splash of hot pink.

Daphne appreciates statuary and stones but is discerning in her use. She recently added wooden bullrushes on flexible stems, saying "I saw them and thought, `That's me'."

She juggles gardening with three part-time jobs, riding and her grandchildren but has no intention of stopping.

"There's always something. You can never be perfect."

That being the case, she took out a grape house, as the vine was doing poorly, and after digging out and levelling the area, built a sun terrace - "Then I carted a ton of limestone chips around for it."

Recently, her son removed "a big, high prickly hedge", opposite the back door. "That gave me another garden to work with."

Keeping a garden like this up to the mark requires a lot of work, although Daphne likes to have plants tightly packed to minimise weeding over summer.

Nonetheless, it takes two hours to mow the lawns, raking leaves in autumn is a big job and even in winter there is tidying to be done.

"I'm keen on hostas and rengarenga lilies but in winter the lilies frost and you've got to take all the leaves off."

At present, she is shaping small hebes in front of a water feature and is planning more Buxus hedges to maintain her semi-formal approach.

She doesn't see the garden as work - "I can go out in the morning with a coffee and when I come in, it's midday. That's how much I love my garden."