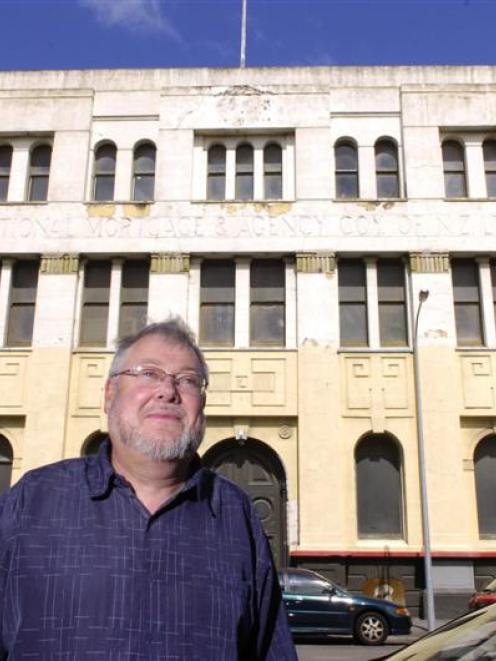 The bell is tolling for many slowly crumbling warehouses, factories, workshops, and head offices in what used to be Dunedin's waterfront business and industrial precinct.

They are concentrated cheek by jowl in blocks bounded by Rattray, Princes, Police and Cumberland streets. Many are still being used but some are a shadow of their former selves.

Some have been converted to new uses but many of the more than 100-year-old buildings have fallen into the sort of disrepair that could cost their owners a lot of money to fix. 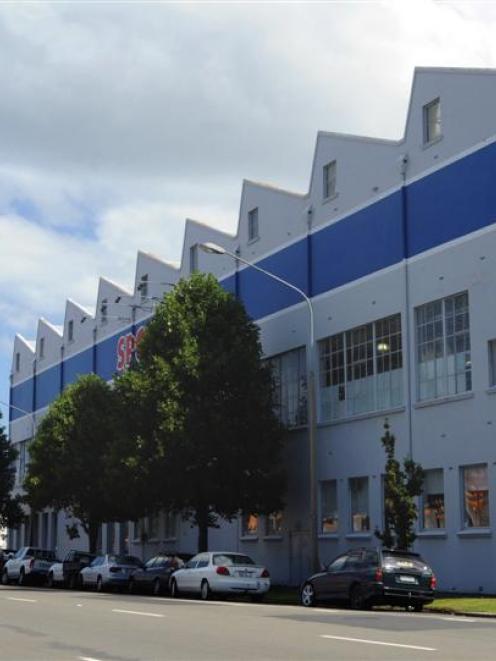 The NMA wool and manure store.
Historian Alexander Trapeznik, an associate professor at the University of Otago, says the buildings might be part of one of the most significant and under-valued mercantile heritage precincts in New Zealand (see diagram Page 47).

It grew in the mid- to late 19th-century, when gold and then a rapidly developing cropping and pastoral farming trade helped a booming Dunedin become the unabashed financial, commercial and industrial centre of colonial New Zealand.

The buildings were built on land reclaimed from the harbour and spoke of a time when Dunedin showed the colony - and the Empire - how feasible it was to achieve wealth in a new country thousands of miles from the United Kingdom. 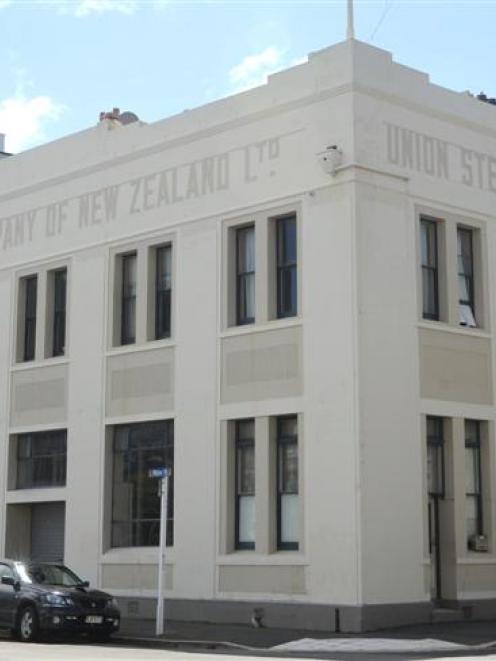 The second NMA head office.
"The buildings in this precinct are a tangible link to a very important time for Dunedin and for New Zealand, and I think you can make a very strong case for the waterfront precinct to be recognised not just regionally but nationally," says Prof Trapeznik.

They left an enduring legacy of a kind that in Dunedin, as elsewhere, has been the poor second cousin to grand public buildings, churches, and houses in the ongoing effort to protect and improve significant historic properties. 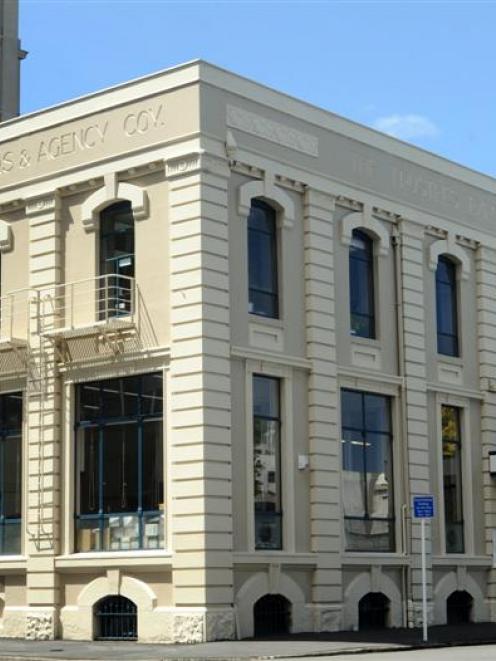 The first NMA head office.
In work he hopes will help improve the balance, Prof Trapeznik has researched 68 mercantile and industrial buildings in the old waterfront precinct, and has compiled a working list of 77 more. He hopes to have the work published.

The list adds context - and names - to the sometimes "ghostly and often decrepit monuments to Dunedin's former glory" that Prof Trapeznik says are hidden in an under-appreciated part of the southern central city.

Many on his list relate to the region's early development in cropping and farming, and especially the stock and station industry, which gave farmers the expertise to sell their goods, store them, and transport them.

There were manufacturers, too.

Sargood, Son and Ewen imported and made clothing, Kempthorne and Prosser manufactured drugs, Shacklock and Co made coal ranges, and Hallenstein Brothers had a warehouse and factory in the precinct.

Prof Trapeznik says the list expresses "in a very real way the old cliche" that the economic strength of New Zealand towns were underpinned by what happened on the farm.

"It is very rare to find such tangible, early evidence of the interdependence of town and country, but that is exactly what we have here. These buildings could be considered a snapshot of something that is true for much of New Zealand."

The examples are rare because, in other centres, they have been knocked down.

But in Dunedin, much of the waterfront precinct survived through "an accident of economics - it was not considered worth anyone's while to remove them".

"It is a wonderful irony that these buildings, which were once so important to the economy, have been spared destruction because it hadn't made economic sense to remove them.

"So by accident, rather than by design, we have a precinct of buildings that have survived as, in the wider context, we have put our efforts into other, much more grand, heritage buildings, elsewhere."

Prof Trapeznik says the precinct has been "overlooked" by the uninitiated, in part, because of the sometimes "myopic" view of built heritage that prevails in Dunedin.

It was an "unbalanced view" that focused on "the `great' - the great churches, public buildings, grand houses" and ultimately, the great people - rather than on the socially and economically important workplaces that helped finance them.

It makes sense that the "great" get all the attention. Dunedin has some of the best, grand Victorian architecture in the southern hemisphere and it generates pride and tourism revenue, Prof Trapeznik says.

"These buildings have made heritage tourism an integral element of local regional and national government planning, but that can become problematic because when you are dealing with heritage as a marketable commodity then you are only going to be preserving select examples, the examples that attract money.

"It means we selectively preserve based on current enthusiasms and we get a view of heritage that can be confused with nostalgia, heritage that gives us a view of the prosperous good times that ignores conflict, defeat and adversity as well as celebrating the glorious in the past.

"It discounts the commonplace view. It gives us a history from above and that is an unbalanced view."

It was a situation where money and taste, rather than historical or cultural significance, frequently determined which industrial sites survived.

Other buildings survived because they could be used for purposes other than for which they were designed.

"Adaptive reuse" saved many but also meant commercial or investment viability could dictate which buildings were saved.

"Heritage is subject to the vagaries of market forces and that's a problem when you have the criteria of preserving our buildings based on economic forces and increasingly that's the trend here.

"Economic use justifies investment but, left to their own, as some are now, we will have decay by neglect."

Prof Trapeznik says there needs to be a co-ordinated re-evaluation of the city's built heritage, starting with an inventory of its significant buildings.

The schedule of heritage buildings in the Dunedin City Council's district plan lists few of the buildings the professor identified, and nothing of their histories. Information on others was either scant or, "in some cases, I suspect, inaccurate".

He acknowledges many people - including developers - continue to work hard to identify and preserve Dunedin's mercantile heritage, but says a new approach is needed.

A "living", perhaps online, database of potentially significant mercantile buildings could help policy-makers and researchers fill the gaps in the heritage inventory by encouraging the people who have worked in the buildings to submit their ideas and memories.

"We must consider that we have, in a general sense, overlooked places of work as heritage buildings for too long. Allowing many people to be involved in redressing that imbalance will help us understand why so many people may consider these buildings important."

The city may be sitting on a new heritage drawcard. Backed by a precinct-wide conservation plan, a coordinated preservation and adaptive-reuse scheme could see the area transformed into markets, specialist stores, eateries and boutique accommodation.

Hobart's Salamanca Market was built around its industrial heritage buildings and the same could be done in Dunedin.

After all, it has worked in Oamaru.

It would all cost money and neither the city council nor the New Zealand Historic Places Trust has the resources to do it all on their own.

Dunedin's heritage is also New Zealand's heritage, and the Government needs to help - with laws and money - to preserve it, he says.

"It always comes back to the big money question, but I don't think we should sell out our heritage for nickels and dimes.

"We should have a vested interest in preserving these buildings, not just for the information they hold but also for what they hold for future generations.

"If we don't do any thing now these buildings will later be bulldozed and that would be tragic. Whatever happens, the city needs to decide, soon, whether its industrial and mercantile heritage is worth keeping.

"In 20 years, we don't want to see that a number of the buildings have been allowed to decay. I hope to see we've done the work to incorporate these warehouses and other buildings into a popular and vibrant waterfront area.

"But, in order to get that we have to start thinking about how to get there, now."

Assoc Prof Alexander Trapeznik picks the best and worst of the historic precinct, and a notable loss.

Preserved: This is a hard choice, there are not that many examples to choose from. However, I would nominate the Crown Roller Mills building (right).

• Lost: Stock Exchange Building. One of the most iconic buildings ever lost to Dunedin was the Stock Exchange, the towering Victorian structure on Princes St that gave Dunedin's Exchange area its name. It was demolished in 1969.