Dashing heroes of a harbour crossing 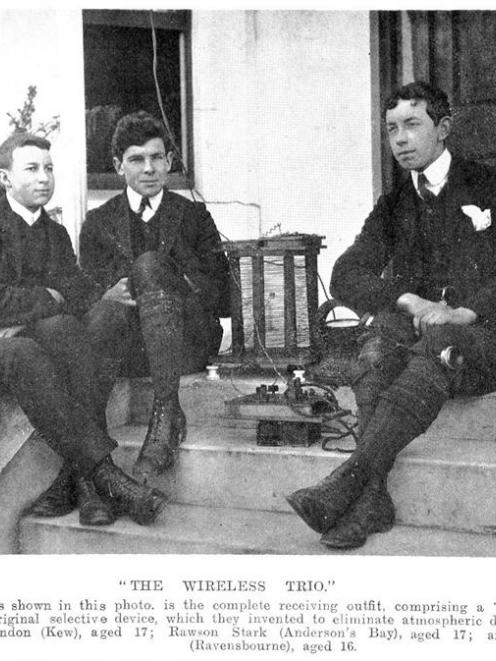 (From left) Cyril Brandon, Rawson Stark and Stanton Hicks with their "receiving outfit", including a "Massie Detector" and the boys' original "selective device", which they invented to eliminate atmospheric disturbances. Photo from the Otago Witness.
Dunedin is noted as the pioneering centre of radio in New Zealand because Professor Robert Jack's broadcast from the physics department at the University of Otago on November 17, 1921 is accepted as the country's first radio broadcast, but the city has an even earlier claim to fame.

The boys had already been fiddling around with radio gear for at least a couple of years, swotting up on textbooks from the Athenaeum and scrounging electrical gear from various sources, made easier by the fact that Rawson Stark was the son of the city's electrical engineer, E. S. Stark, and Brandon was employed by electrical engineers Turnbull and Jones.

Hicks was a student and his father worked "on the literary staff" at the Otago Daily Times, which may account for the headline in the sister paper, the Otago Witness, "Three Clever Boys".

At the public demonstration Morse code messages were exchanged between the mayor of Dunedin, John McDonald (a tailor who was, incidentally, the first New Zealand-born mayor of Dunedin) based at Andersons Bay, and the mayor of West Harbour, engraver Hagberth Moller (of the firm which is now Brandwell Moller).

About 12 words a minute were able to be sent. At both stations various dignitaries had gathered and the Otago Daily Times reporter provided a detailed description of the intricacies of the transmission and reception process, which would have baffled many readers: "on depressing the sending key the primary current from the battery rises from a voltage of 16 volts to something like a million volts in the secondary circuit and becomes high tension alternating current of tremendous energy, and passes through a battery of Leyden jars, which on discharge, set up oscillations in an inductance coil or tuning circuit whence a suitable lead conducts the now high frequency current to the aerial".

Appropriately, the first message sent, that by Moller to McDonald, noted, "this shows that young New Zealand is treading closely in the footsteps of advanced electrical science". (Marconi had sent his first Morse code message by radio in 1896).

The transmissions across Otago Harbour were not strictly legal as the Wireless Telegraphy Act of 1903 had set up a government monopoly of wireless use and stated, "any person who erects, conducts or establishes any station or plant for the purpose of receiving or transmitting without first obtaining official consent is liable to a maximum fine of 500 [$64,000 in 2008] as well as forfeiture of their equipment".

The Dunedin lads were undeterred by this threat and transmitted a message for Prime Minister Joseph Ward, which was then telegraphed to him in Wellington.

The Act was rarely enforced and Ward did not order the post office inspectors to seize the gear, probably because he was aware that most of the post office telegraphic staff were at the Andersons Bay and Ravensbourne stations that very night.

Instead, he sent this telegram to the boys: "The setting up of a wireless telegraphy station and the successful transmission of messages reflects the highest credit upon the boys. I congratulate them upon the possession of such inventive faculties, which augurs well for their future success in life."

For Stanton Hicks, who graduated MSc in 1915 and MB, ChB in 1923, Ward's prediction was certainly accurate.

He went on to outstanding success in Australia in the fields of human physiology and pharmacology and was knighted in 1936.

His other great contribution was as a nutritionist, and after working as a catering adviser to the Australian army he wrote a book, Who Called the Cook a Bastard, indicating he had adapted well to his new country.

Rawson Stark and Cyril Brandon may not have reached such heights but they could still claim to be New Zealand wireless pioneers.

Jim Sullivan is a Dunedin historian.