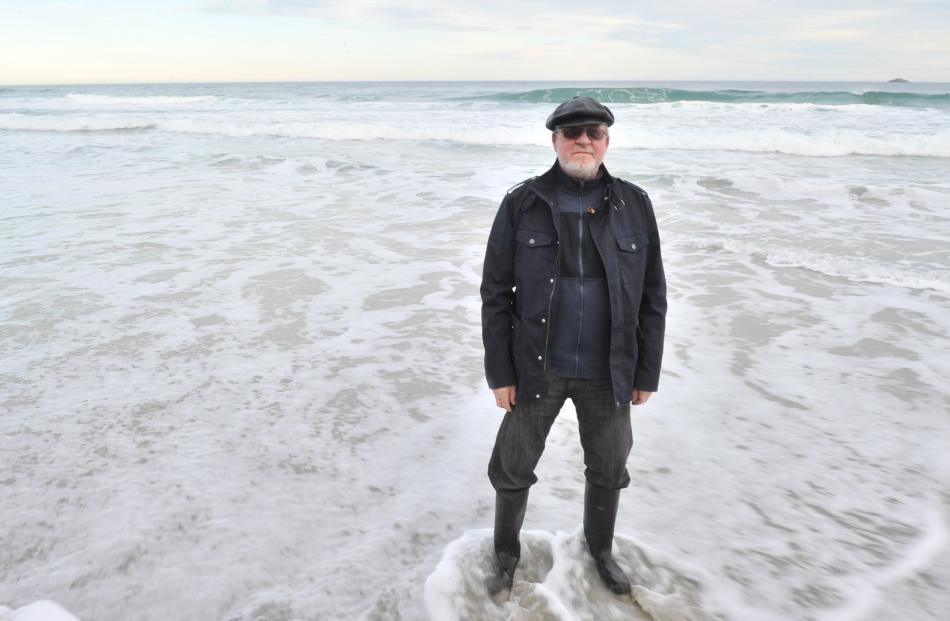 Philip Temple is angry. He's angry about climate change, the depletion of resources, the rise of surveillance, unstable and/or unsustainable economic systems, inequality ... the list goes on.

Yet, in Temple's world, there is sunshine as well as clouds. Certainly, there's no shortage of laughter when the 75-year-old Dunedin author discovers a story arc (involving human ashes) in his latest work, MiSTORY, was entirely unintentional.

''It's a mixed situation,'' Temple muses in an interview earlier this week, discussing the key themes and motivations behind his dystopian 10th novel.

''I'm quite content that I'm healthy, which is a real plus, I can tell you. My energy levels haven't dropped much, and that is something that can happen at my age. Also, I'm happy with my general personal situation.

''But I can't help but get angry about what has happened to the environment as well as the desperate plight of some people.''

Describing himself as a ''realistic dreamer'', Temple is quick to point out he can't predict the future. Still, that doesn't stop him gauging current vital signs in order to ponder just how strongly - or weakly - our pulse might beat halfway through this century.

Actually the second novel by Temple to be released this year, following the launch in March of The Mantis (which included an e-book edition), MiSTORY offers an obvious play on technology in its title. Yet, given the tone of the book, the use of a lower case ''i'' (versus ''I'') could also point to a lessening of individuals' power.

Sticking with the truism, ''write what you know'', Temple sets MiSTORY in New Zealand's south, specifically Dunedin and Central Otago, where protagonist John21 is forced to re-evaluate his life following the death of his partner, renegotiate his duties as a bureaucratic cipher and his perceptions of a world riven with war, food shortages, epidemics and economic chaos.

John21 keeps a diary, written during the year of ''The Change'', that tracks his journey from questioning employee to a rebel who works for the ''Movement'' in its efforts to wrest control from a totalitarian state. Enough said, lest the plot be spoiled.

Let's focus instead on Temple's motivations for the novel, his 10th in a career in which he has won awards and fellowships for his fiction, outdoors non-fiction, historical biographies, television documentaries and children's books; he has also been made an Officer of the New Zealand Order of Merit (ONZM) for services to literature and received a Prime Minister's Award for Literary Achievement.

Significantly, MiSTORY is being released just over a month month before a general election. That's no coincidence.

A committee member for environmental lobby group Wise Response, which earlier this year urged the New Zealand Parliament to undertake a national assessment of the risks posed by climate change, economic instability and other potential threats to New Zealand's wellbeing, Temple says his novel is an attempt to stimulate further debate on such topics.

''It's deliberate. One of the key reasons I have published it myself (Font Publishing) is because I was really anxious to put it out before the election ... It is dedicated to Generation Zero, a bunch of young people across the country who are trying to make a difference with their carbon-free objective.

''In the spin-fest of electioneering, crunch issues are being ignored. We live in a worsening surveillance state, we are already experiencing the impacts of climate change and there is another likely global financial crisis around the corner.''

Temple points out that though he doesn't belong to any political party (''because I treasure my independence''), that does not prevent him from being politically active.

''I find it a bit distressing at times that there are very few in the literary world in New Zealand who actually are concerned about what is going on around them. They might write beautiful books but they are often not connected to the reality of the world.

''There are a few writers - Brian Turner is another - who feel that we have a particular talent that can be put to use ... On the non-fiction side of things, I have been involved in MMP campaigns and use my writing skills to help those campaigns. If I feel strongly about an issue, I feel duty-bound to do something.

''A few years ago when I turned 70, I thought that, realistically, there are a limited number of books left for me to write before I keel over or go bananas. And when it came to fiction I thought, what is the most important area I should look into?''

In a recent online conversation with a member of the Generation Zero movement, Temple reflected on the fact ''many people are so busy trying to survive financially, to cope with the strains of everyday life or, conversely, trapped into the pursuit of material wealth and possessions'', that little time is given to contemplating - and acting on - what is happening to their lives and the world around them.

''I suppose that goes back to square one, which is why I wrote the book,'' he explains, adding MiSTORY was ''definitely'' prompted by concerns for the future of his five grandchildren, the eldest of whom is nearly 16.

''I arrived from the UK into Wellington in 1957 as a young immigrant and started working there. At that time, I think there were only two millionaires in the country and people were proud of that.

''There is no perfect world, but in the 1960s there was virtually zero unemployment; there was genuine equality and a high quality of life. There has been a steady deterioration since.''

Temple has dealt in cautionary tales before. Take his environmental allegories, Beak Of The Moon (1981) and follow-up Dark of the Moon, an anthropomorphic saga of the mountain kea. In both of those, he went to great lengths to get rid of any human metaphors. For MiSTORY, the prime casualties are punctuation and grammar.

Call it a sign of the times, Temple says.

''What I have always done through my career, even with non-fiction, is to try to get the right voice and style to suit a particular situation.

''At one point, John21 refers to his dead wife, a scholar, and his attempts to improve himself, and he does: as the book goes on, he gets somewhat better at writing.''

Temple's reflection on the decline of the apostrophe, among other devices, also serves to add an urgent, off-the-cuff tone to a future in which non-electronic media (remember pen and paper?) is scant but nevertheless free from the prying eyes of metadata search engines.

''I did a lot of research and reading. When we are told there is nothing to worry about by our leaders, it's not true. Surveillance is increasing. I think the UK has the most surveillance in the world. It is very real.

''There is, of course, a certain debt to George Orwell's 1984 in the use of acronyms and slogans, etc. People say, `Well, 1984 never actually happened', but it did largely - in East Germany - and the book's political and philosophical warnings have always been valid.

''So, in that respect, MiSTORY can also be taken as a warning - `wake up folks, don't let it happen' - in the way that Orwell's novel has worked.''

Dystopian it may be, but MiSTORY is firmly rooted in real places. There is New St Kilda, an area difficult to get to given most of its approaches are under water; likewise, Central Otago still exists, although he laughs (again) at the thought his inclusion of a railway through the area might put his novel into the ''fantasy'' genre.

Set against the interconnected crises of war, economic strife, totalitarianism and environmental degradation, familial relationships are undergoing change, too, as John21 finds himself increasingly connected to his siblings.

In Temple's novel, it seems hearts are furiously beating despite the battered body of the wider world. A bleak outlook? Yes. But a smidgen of optismism, too? ''The end of the novel is optimistic about survival, that the human race will go on. Although it is a dystopian novel on the whole, it is only my imagining of it.

''It's very hard to be optimistic.

''What I'm really trying to do is get people to talk about issues,'' Temple emphasises.

''There seems to be this constant battle between the idea of learning to live within our means environmentally and this drive for more profit and more use of resources.''

Fact file
- Philip Temple (75) was born in Yorkshire and educated in London. He left for New Zealand at the age of 18, becoming an explorer, mountaineer and outdoor educator.

- Since that time he has published more than 40 books as well as contributing articles and reviews to a variety of publications.

- Temple's non-fiction writing ranges from books about exploration and the outdoors to New Zealand history and electoral reform (MMP).

- His book about the Wakefield family and the early British settlement of New Zealand, A Sort of Conscience, was named New Zealand Biography of the Year in 2003, and won the Ernest Scott History Prize from the University of Melbourne.

- Temple has been awarded several fellowships, including the Katherine Mansfield Memorial Fellowship (1979), the Robert Burns Fellowship (1980), the 1996

- In 2005, he was invested as an Officer of the New Zealand Order of Merit (ONZM) for Services to Literature and given a Prime Minister's Award for Literary Achievement.

- Following examination of his work, Temple was granted the higher degree of Doctor of Literature (LittD) by the University of Otago in 2007.

- Temple lives in Dunedin with his wife, poet and novelist Diane Brown.

The book MiSTORY, by Philip Temple, will be launched at the University Book Shop, 378 Great King St, Dunedin, on Thursday August 14, at 5.30pm. Brian Turner will launch the book.