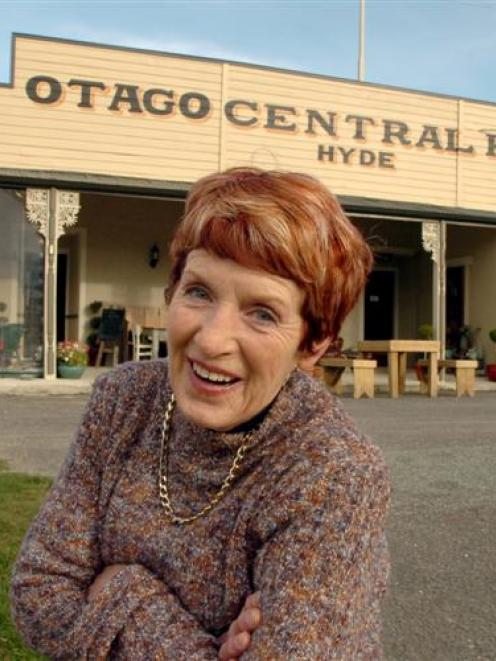 The irrepressible Ngaire Sutherland outside her hotel. Photo by Jane Dawber.
Long gone are the days when Hyde boasted several hotels, just about as many churches, plus a butcher, a baker and probably a candlestick maker.

And, a railway station, albeit on the nearest flat land about 2km away.

Once called Eight Mile - the distance from the Hamiltons gold workings - the rail link arrived in 1894.

However, Hyde also earned an unwelcome place in New Zealand rail history when the derailment of the Cromwell Dunedin Express, just south of the town, in 1943, claimed 21 livesFor the latter part of the 20th century the world all but ignored Hyde.

It was a just a squiggle and a squirt on State Highway 87.

While the closure of the Central rail line was good news for the area's transport firm, and the building boom kept the schist rock quarry busy, there really was no reason for travellers to stop.

It took the opening of the Otago Central Rail Trail to stir Hyde's revival.

These days the rebuilt Otago Central Hotel is one of the few reminders of those 19th-century boom times.

Energetic owner Ngaire Sutherland doesn't do anything the easy way. She does it her way, as the wonderfully stylish and sometimes quirky nature of the hotel's interior shows.

A favourite stop for those tackling the rail trail, the hotel doesn't have a public bar. In fact it's not open to the public as such, so where customers once slaked their thirsts, paying guests now enjoy a sprawling eclectically decorated lounge room.

However, the licensed cafe - part of but separate from the hotel, as only Mrs Sutherland could design it - offers travellers value for money fare.

For a quick snack, a tasty savoury scone and strong, flavoursome coffee hit the spot. There's also a good wine list and a selection of chilled beer.

A couple of years ago, we celebrated a family birthday overnight at the hotel.

The walk from Daisybank to Hyde on a burning January day ensured a good thirst and healthy appetite.

The evening's dinner was a stunner - traditional roast with all the trimmings.

More recently, Nifty Noza, as she is known in Hyde, has provided even more reasons to stop.

Last year, Mrs Sutherland became a marriage celebrant and added to her collection of buildings in the settlement by buying and renovating the former Hyde school.

She has now relaunched the venue as Hyde School Function Centre.