To insure or not to insure? 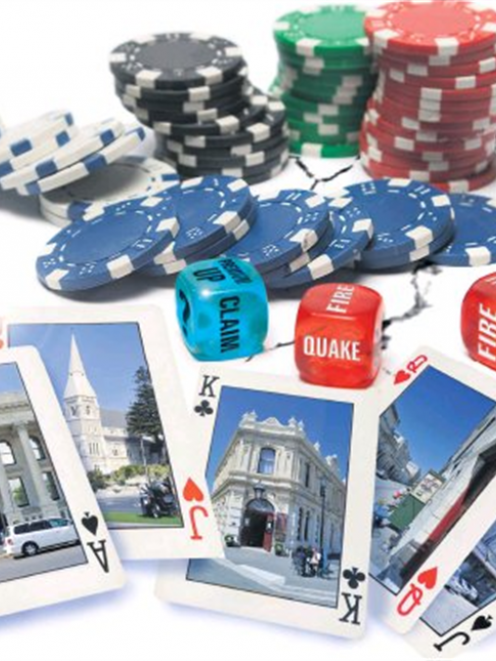 Christchurch's earthquakes have highlighted the importance and failures of the insurance industry. Oamaru's Ben Guild looks into the philosophy and realities of insurance.

Humans are, by nature, fearful creatures.

And it is a very good thing, too.

Mostly, fear is healthy, rational, and to be encouraged.

Without it our ancestors might not have hunted in packs.

Neither would they have avoided the dangers of seas, heights, fire or predators.

Their ability to be frightened, and then to alter their behaviour accordingly, allowed humanity to flourish.

Insurance, in its purest form, is about fear, and about gambling.

A person who takes out a policy is effectively betting that something will happen to their property.

The insurance company, on the other hand, is betting it will not.

These wagers have been going on for thousands of years.

The first written insurance policy dates back to about 2100 BC to a Babylonian obelisk monument with the code of King Hammurabi carved into it.

It allowed traders in the form of a loan to guarantee the safe arrival of their goods by caravan, and mitigate against robbery, bad weather and breakdowns.

Since then, the concept has formed the foundation for trade of all kinds, and allowed people to protect what is theirs.

It is only when the cost of that fear outweighs the potential for harm that problems present.

The Christchurch earthquakes were like rolling snake eyes for insurance companies. The February jolt, which was technically an aftershock, was a once-in-2000-year event.

AMI, which had the majority stake of the Christchurch property market, was hit the hardest. Late last month it declared an annual-after tax loss of $705 million, meaning it is likely to dip considerably into its $500 million Government guarantee.

Other insurers are down on their luck too.

Ansvar NZ, which insures most of New Zealand's churches, has handled $700 million in claims since Christchurch's first earthquake in September last year.

It has received only $35 million in premiums over the same span, and in September announced it would not issue any new earthquake cover, and would only renew existing cover until December 1.

The result is a drastic increase in the cost of insurance - especially for buildings erected before 1935 which, in many instances, will no longer qualify for earthquake cover.

Oamaru, with its size, and large number of heritage buildings, provides an interesting case study when considering the new landscape of the insurance industry.

Waitaki District Council strategy group manager Richard Mabon, who delivered a report to council detailing its insurance options, believed the recent events in Christchurch would lead building owners to a pivotal re-evaluation of risk and reward.

"I think they'll be having to make a judgement about how much of this risk they can afford to manage through insurance," he said.

"We've made some changes in our programme and our overall bill still went up by a substantial amount.

"We have signalled there are other areas we would look at ...so we haven't finished making our own assessment of our programme and whether we need to make changes in some other areas too. I expect we will."

The cost of purchasing earthquake insurance had increased hugely, he said.

"All premiums have risen, but pre-1935 [buildings] have particularly risen sharply," he said.

The change had forced the council into altering the type, and amount, of cover it sought.

"Obviously we own a number of high profile pre-1935 buildings; our headquarters, the opera house, the art gallery, the museum and a large number of public halls as well," he said.

"Previously they had earthquake cover.

"Most of our pre-1935 buildings now will typically only have indemnity value cover and for a number of them we haven't gone for any earthquake cover at all."

It was underground, though, where the potential cost of an earthquake could be at its most drastic, he said.

"The most important assets we insure are probably not our buildings.

Christchurch certainly wasn't able to do that.

"The cost of that did go up as well but that was probably the most important of the covers to secure because if you had a Christchurch type of event here, before you replaced the library or the gallery you'd want to know that you've got water supplies that function and waste water systems that work."

Insurance companies, in raising the cost of insurance across the board, were doing two things, he said.

"One is they are recognising they have suffered a big loss and are trying to recoup it. And there's an argument as a commercial entity about how quickly they choose to recoup that.

"The other thing they are doing is saying: there is a risk here in New Zealand that we didn't understand as well as we could have, and now we've suffered a major loss. Do we want to insure that risk again?

"Part of the signal they are sending to the market with a heavily increased premium is: we're not sure we want to take on that risk again because we might not have an earthquake for another 200 years, or we could have it in two months.

"And so, they are saying if you do want us to insure that risk you're going to have to pay a high price for it."

The Oamaru Whitestone Civic Trust, which owns 17 buildings in the Victorian precinct including the Criterion Hotel and the Loan and Mercantile building, is in the same situation.

Chairman Phil Hope said the trust had been left with few options regarding earthquake and tsunami insurance.

"Like a number of building owners we find ourselves in a situation whereby our insurance providers have changed their policy regarding earthquakes," he said.

"We have looked at alternative options. However, the cost of new earthquake cover would exceed our existing premiums considerably.

"We understand Dunedin property owners have faced similar issues. The trust will undertake a series of discussions with tenants on the implications of this change."

The trust has managed to insure its buildings, including for fire, but not for earthquake, volcanic, tsunami or geothermal damage with a minimal increase in premiums from about $10,000 a year to $12,000.

Mr Mabon warned of a more important issue to be taken into account.

"The building thing is very high profile because this is a community that has an amazing heritage with these buildings," he said.

"If you were told that you had one of these buildings which would be a very high risk in an earthquake, what you do with insurance is work out whether you want to replace that building or have some funds to go towards its replacement.

"It doesn't actually address the risk of the employees and the members of the public who use this building.

"And there are dozens of those buildings in the main street."

One of those is the former chief post office - now the council's headquarters. The council has asked for a report on how earthquake-proof it was made when renovated in the early 1990s. It is also proposing to have an alternative Civil Defence emergency operation centre there.

"If council gets that report and decide they don't like what the engineer says, maybe they'll put the emergency operation centre somewhere else, but it does raise some questions for them about what do we want to do about the fact that this is our public headquarters. We've got 60 staff in the building on a day to day basis; we've got public in the building every day Monday to Friday.

"That's another issue entirely and it's an even more vexing one that the insurance one really."

Tim Hurd, the vicar of St Luke's Anglican Church in Oamaru, consecrated in 1876, was expecting a three-fold increase in premiums for church property.

One indication was that the excess could also rise to 10% of valuation, which for some buildings could be in the many 10s of thousands of dollars.

Such an increase could make the smaller congregations untenable, he said.

"For some congregations, it may be that public liability and site clearance will be the limit of what is possible or prudent.

"Many are likely to look at less than full replacement cover.

"Coupled with likely costs in greater earthquake strengthening, this will almost certainly force the closure of some church buildings in the medium term. "Many will have to be insured at a minimal level."

There were 11 churches in North and East Otago, some of which had halls, he said.

Only three dated after 1935 and, although cover had been renewed until next June, he was unsure what influence Ansvar's unwillingness to continue earthquake cover after December would have.

Without the funds to adequately strengthen buildings, or the ability to purchase earthquake insurance, Mr Mabon alluded to the fact that many owners of pre-1935 buildings may find themselves in the unenviable position of being trapped within beautiful, intact buildings they could not escape.

"You can argue that on the 23rd of February, or even in September [2010] the value of all those buildings decreased," he said.

Of course, those people, like regular policy holders, could simply gamble on nothing happening, and let it ride.