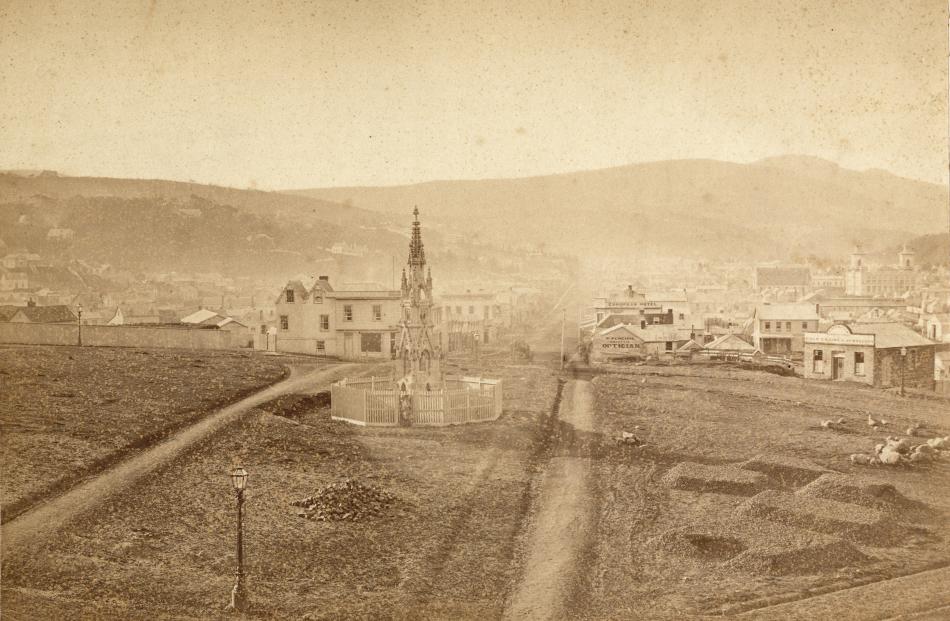 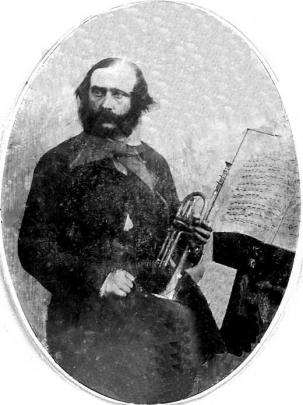 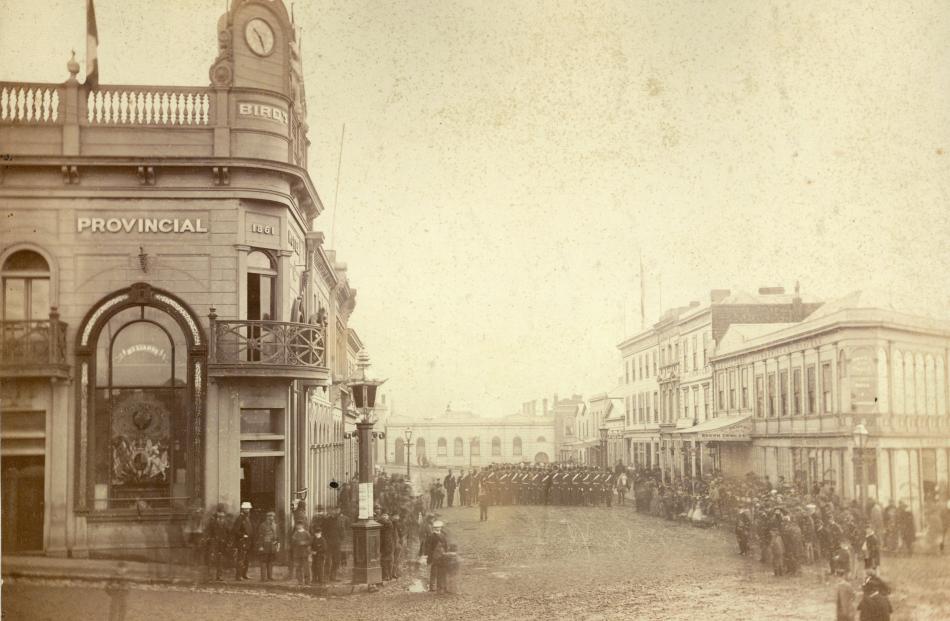 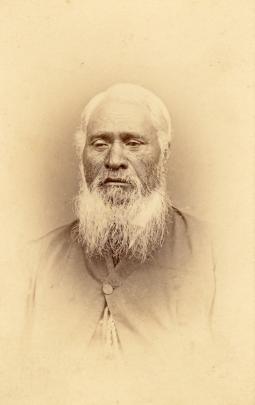 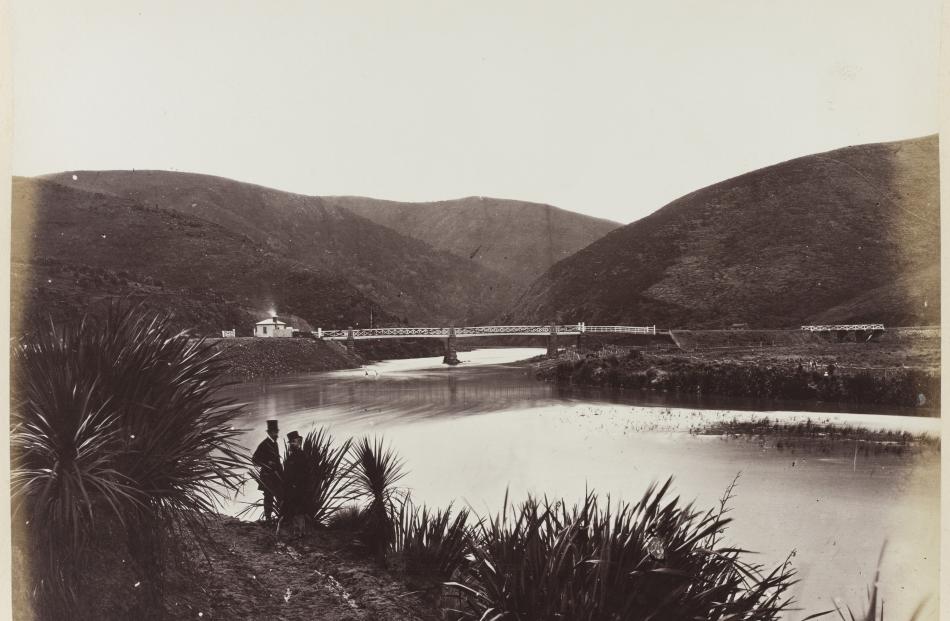 A new book has brought into focus a family of pioneering photographers, one of whom recorded Dunedin in the 1860s.

Henry Albert Frith, a former caricaturist and silhouette artist, arrived in Dunedin from Australia in 1866 and opened a studio in Farley’s buildings in Princes St.

The following year the 45-year-old collaborated with publisher Bruno Riemann in the production of the Otago Photographic Album. This consisted of 12 scenic images of Dunedin and its surrounds. The loose prints were published at the rate of two a month and mounted on pre-printed cards with a gold border.

In the first photo, the 1st Battalion of the Otago Volunteers has assembled on the muddy surface of Manse St ready to march during the Queen’s Birthday celebrations. The clock on the Provincial Hotel gives the time as 10.25am. The movement of a ghost-like figure of a youth on the road indicates the length of the exposure.

People also feature in a photo taken at West Taieri. Two men in top hats stand in the foreground while the river leads the viewer’s eye to a bridge and toll house beyond.

Other images show East Taieri, Port Chalmers, Pelichet Bay, Flagstaff and the Water of Leith. In another, Cargill’s monument is surrounded by a picket fence.

Noel Tozer, author of Snips and Snaps: the Friths, nineteenth century portraitists, miniaturists, caricaturists and photographic artists, says the photos, measuring about 18cm x 28cm, were designed to be kept in a folio-sized cover and probably sold for about a guinea (one pound and one shilling) each.

No complete album has been found but at least two incomplete sets with covers have survived; one is in Te Papa and the other in the University of Otago’s Hocken Collections.

Frith would have had to prepare his glass negatives and sensitised papers in his own studio, Tozer says.

The glass plates were coated with an alcoholic "syrup" containing guncotton, then just before exposure were sensitised by a solution of silver nitrate and placed in the camera while still wet. This was known as the wet-collodion process.

The papers for the prints, known as silver-albumen papers, were prepared with a coating of egg white and salt and also sensitised with silver nitrate solution. Photographers prepared and purified their own silver nitrate, often by reacting foreign coins with nitric acid.

As there were no suitable artificial lights, the papers were then exposed to sunlight and often only a few prints could be obtained from each negative in a day.

"When we think of how easy it is for us to point our cameras and manipulate the resulting digital images, it is truly amazing that prints of this quality could be produced 150 years ago and still be brought to light today".

No photographer is named on most of the Dunedin mounts and there is some doubt about who took the final four images in the series. But Tozer’s research leads him to believe Frith took 11 of the 12 photos.

Riemann declared himself insolvent in March 1868 but Tozer says whether or not the album was a commercial success, its publication was a "brave" move and had left an impressive record of 1867 Dunedin, then New Zealand’s second city.

An 82-year-old retired engineer from Melbourne, Tozer spent more than 12 years writing the book after discovering by chance that the Frith family were well-known silhouette artists in England.

A great-grandson of Henry Frith’s brother, Frederick, he had entered the family name into a genealogy website and was contacted by an English man about silhouettes produced by the Friths in the early 19th century.

John Frith and his three children, Frederick, Henry and Letitia, travelled the UK inviting the middle classes to sit for these portraits, cutting profiles from card and sometimes delicately highlighting them in gold.

In the 1850s, when the art form had been overtaken by photographic portraiture, the three younger Friths migrated to Australia, where they adapted to the new medium and produced a record of 19th century Tasmania and Victoria.

Tozer is uncertain what prompted Henry’s later move to New Zealand but says he was a "restless" figure, had probably heard of the gold discoveries in Otago and knew that if he stayed in Tasmania, he would be in competition with his brother.

"He was a bit of a character, I’m sure of that. He had some stoushes with people."

One of those rows resulted in him being summoned to court in Cork, Ireland, in 1849. Frith had hung likenesses of a local wine merchant and a county official outside his rooms. One was stirring a tumbler of punch for the other, who appeared to be drunk. The men’s solicitor asked Frith to remove the picture but he instead hung the solicitor’s letter next to the caricature and, once in court, sketched the legal team employed against him. Despite one of the solicitor’s warning he would "spatter" his brains "on the flags" if he held him up to public gaze, he displayed the pictures, causing amusement among the public.

Henry Frith spent three years in Dunedin and continued to work in New Zealand until the mid-1890s, first in Thames, then in Auckland.

While prominent in the production of "views", he also produced portraits mounted on tiny cartes-de-visite (CdVs) and larger cabinet cards.

One of his CdVs — so named because they were the size of a visiting or business card — shows an unidentified elderly Maori man with a moko and is thought to have been taken in Dunedin in about 1868. Tozer says it is a striking image and he would love to establish who the man was.

Frith may not have been a "great" photographer but one of his legacies, besides his landscapes, is his portraits of indigenous people, he says.

In Australia, at the request of the government, he photographed the last full-blooded Aborigines living in Tasmania. Here, about 50 of his portraits of Maori people are part of the Sir George Grey Special Collections at Auckland Library.

The Maori portraits might have been taken at the request of the subjects but were more likely for his own commercial gain.

Other Frith photos are probably "buried" in people’s cupboards, waiting to be discovered, Tozer adds.

"There’s been a couple of Hobart [found] since the book was published ... and I wouldn’t be surprised if more turn up."