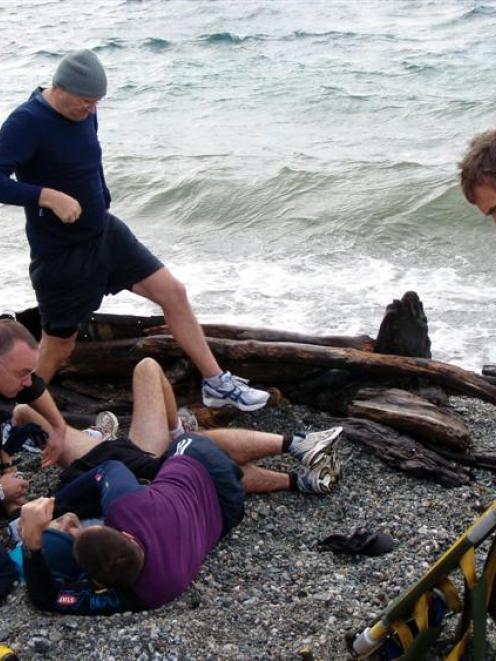 St John advanced care paramedic Andrew McLellan begins to help Philip Somerville while fellow advanced care paramedic Ian Ridley prepares the stretcher. Nevan Trotter lies beside Mr Somerville as he helps to try to keep him warm, and Grant O'Kane is between them and a makeshift wall of driftwood. Photo by Stephen Jaquiery.
A pelvis-breaking moment last June dramatically lowered the sights of Otago Daily Times journalist Philip Somerville. Late in 2007 he climbed Mt Aspiring, while late last year - as he recovers from his life-threatening accident - he struggled up Flagstaff, near Dunedin.

Time did, for a few moments, seem to stand still; the boat rode up on a steep wave, knocked me off my feet, and then dumped back down, crushing me against Lake Wanaka's gravel bed.

Stephen Jaquiery takes up the story.

Laid up with a strained Achilles I had been demoted from the running team member to boatman and had been relishing the opportunity to have a weekend away without losing any sweat.

The lake conditions were perfect as we left the Wanaka jetty, the sky and mountains reflected in the tranquil lake.

"What do you reckon Phil?", I remember asking, "would you have preferred to drive to West Wanaka for the run or is this boat-ride OK?"

It felt good with the wind in our faces as we sped up the lake . . .We all felt good. It was shaping to be a great day.

The waves stood up a little as we steamed past Ruby Island, the sky darkened and the wind increased. But nothing to worry about, nothing but the threat of a little rain to dampen our day.

Spray flew as the boat crashed through waves, waves which grew and grew after rounding Roys Peninsula.

On reflection - and everyone is an expert after the fact - we could have dropped the runners off earlier in sheltered waters, but, no, we butted on to the pre-arranged departure point.

Despite large waves crashing on to the shore, we chose a steep beach landing point where we could nose in close enough for the runners to jump off while keeping the boat's outboard running.

"Go, go!" But it was too late . . . the wind and waves had caught the boat, washing it parallel to the beach and threatening to swamp it with water.

The prop was sucking air. Useless.

The runners, non-boaties, tried to push our craft clear of the beach but to no avail. I leapt to their aid.

Gumboots and jeans immediately buried in waist deep water, but as I flew from the boat my hand dived into my pocket and flung my cellphone well up on to the beach.

The boat was being driven sideways on to the beach. Someone yelled that Phil was under the boat.

I didn't comprehend. I knew I had to turn the nose into the waves before it filled with water. The runners disappeared for a moment.

I later learned that they had pulled Phil from under the boat and clear of the water.

I battled with the bow. They pushed.

I yelled: "Save your strength, wait for a big wave to lift the boat before you push".

It worked. A few centimetres the first shove, half a metre the second. The motor roared but the prop was still not biting water.

One more wave, one more shove . . . the prop bit, the boat was clear of the beach. What a relief, I thought we had lost it, and then my thoughts turned to Phil.

Why wasn't he helping? I hope he was OK.

Perhaps that's the way of such incidents. Helpless in the hand of fate, in that slice of time it is as if you are watching your own destiny from the sidelines.

The boat then jiggled in the wash, rode over my pelvis again before bobbing clear like a mildly bucking horse.

It was - and still is - all somewhat surreal and unreal.

The date, Saturday June 14, will never be forgotten; the day when death came knocking.

The place, West Wanaka's Colquhouns Beach, is imprinted on my consciousness forever.

Three of us, lunchtime jogging mates, had been dropped at the beach for a three-hour walk and run along part of the lake shore and up and down the Minaret Burn.

A fourth, ODT illustrations editor Stephen Jaquiery, would share boat duties with his Wanaka friend, the owner of the 6m Stabicraft.

With the wind strengthening from the northwest, we alighted to find the boat being buffeted on to the beach. Alarmed about its fate, we struggled to push it clear.

I was on the starboard side in about shin-deep water when - and the details remain a little hazy - a wind gust and wave caught the high-sided boat, swinging it around.

I went down and it came down on top of me. I tried to stand, staggered, sunk down and then was dragged to the shore by my armpits.

The adrenaline surge blocked pain for several seconds before I came to a rather obvious conclusion: "Something's wrong here. It looks as if our run might not be happening today."

I lay on the water's edge, cast with my knees in the air, as pain began to hit in waves. I wiggled my toes and thought, with considerable relief, that life in a wheelchair did not loom.

The boat, meanwhile, with most of our gear had motored clear of its peril and and my friends covered me with the emergency clothes and a warm hat brought for our expedition.

I was still close to the water's edge on damp stones, not wanting to be moved for fear of spinal damage.

My shorts and T-shirt layer were soaked and the splash of occasional larger waves sprinkled me further.

While Stephen was in cellphone action, with reception available down the beach, my fellow runners built a driftwood barrier.

I then asked them to lie either side and hard against me to shelter my upper body from wind and water.

My body temperature was obviously falling and the hazards of hypothermia, of which I'm acutely aware thanks to my tramping background, were palpable.

Time dawdled as we awaited my rescue.

The 111 ambulance operator took a full 12 minutes to sort out the where we were and what was going on, an inordinately long time.

There followed what seemed an interminable wait - "watched pots" have nothing on waiting for helicopters.

I, obviously, was going nowhere except on a stretcher. I suspect also that none of us recognised the potentially lethal nature of internal bleeding in the pelvis, including the 111 operator.

There was no gushing blood or twisted limbs to alarm us or her.

What we did know was that my suffering was surging and I was beginning to wonder if my swearing and cussing was emphatic enough to be heard back in Dunedin.

I was, at least, able to console myself with thoughts that help should be on its way.

My situation was so much better than that of untold thousands of wounded soldiers.

Throughout history young men in their masses must have lain in much, much worse agony and misery; often for virtual eternities with little help or hope.

I was also impressed by how calm and apparently rational everyone was, and shared measures of black humour jollied us along.

Not surprisingly, I'm most appreciative of the St John paramedics and an even stronger supporter of the work of the Otago Regional Rescue Helicopter.

Its arrival 1 hour and 40 minutes after the accident brought relief, with further positive news that conditions were good enough to land reasonably nearby.

I'm sure being winched, as had been contemplated, would have been unimaginably excruciating.

One hundred minutes is a long, long time lying on the beach and well outside the so-called medical "golden hour", the time limit frequently cited to save lives after major trauma.

It takes time to round up the crew in Dunedin and time to fly from Taieri. But that failed to explain a sizeable portion of the delay.

The paramedics soon had me on their stretcher and Dunedin bound.

Although I'm usually a coward when it comes to needles, I responded to a brief discussion on the size of the morphine injection with the thought, "as much as you possibly can, thank you very much".

The flight to the Dunedin Hospital roof took 45 minutes and what I remember most was the fine view I had of the interior helicopter roof.

Later, as I lay for five weeks in Ward 3B, I would hear that thud of the blades and wonder who else would be landing in hospital and for what.

They, like me, would be wheeled straight to the Emergency Department.

Being heavily drugged does strange thing to the mind. I remember lying there in relative comfort in the resus (resuscitation) room saying - stupidly - there was no hurry and someone else could go first.

I still had only partial comprehension of the immediate seriousness of the injuries.

I was politely told that I would be dealt with immediately, and the next strong recalled image is of my wife's concerned presence, and then a little later of a large pair of scissors slicing off my running shorts.

Although I've successfully "knocked off" Flagstaff and am due any day tentatively to explore jogging again, it may be longer before I deal with unfinished business and the Minaret Burn.

I hope to get back to Wanaka soon and examine a wall plastered with maps at the family crib there. I'm curious to make sure some wag's reference to Broken Pelvis Bay is in the correct place.

There's also a certain dint in a certain boat to inspect and the strange, lingering satisfaction that an inanimate object did not escape entirely unscathed.

The rescue unfolds
11.10am: 111 Call from Stephen to St John Communications Centre in Christchurch.

11.40am: Helicopter assigned and flies to Dunedin to pick up second paramedic.

* Helicopter flight times affected by head winds to Lake Wanaka and tail winds back to Dunedin.