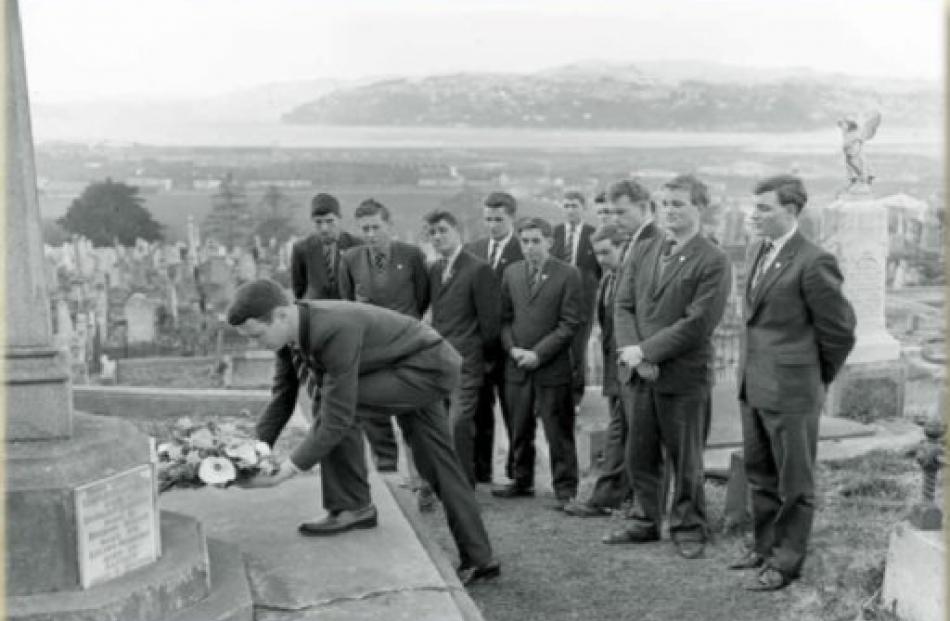 Otago Boys' High School head prefect Bernard Lunn lays a wreath at the grave of doomed first rector Rev Thomas Campbell at the Southern Cemetery in a 1963 ceremony to mark the centenary of the Pride of the Yarra tragedy. Photos by Evening Star. 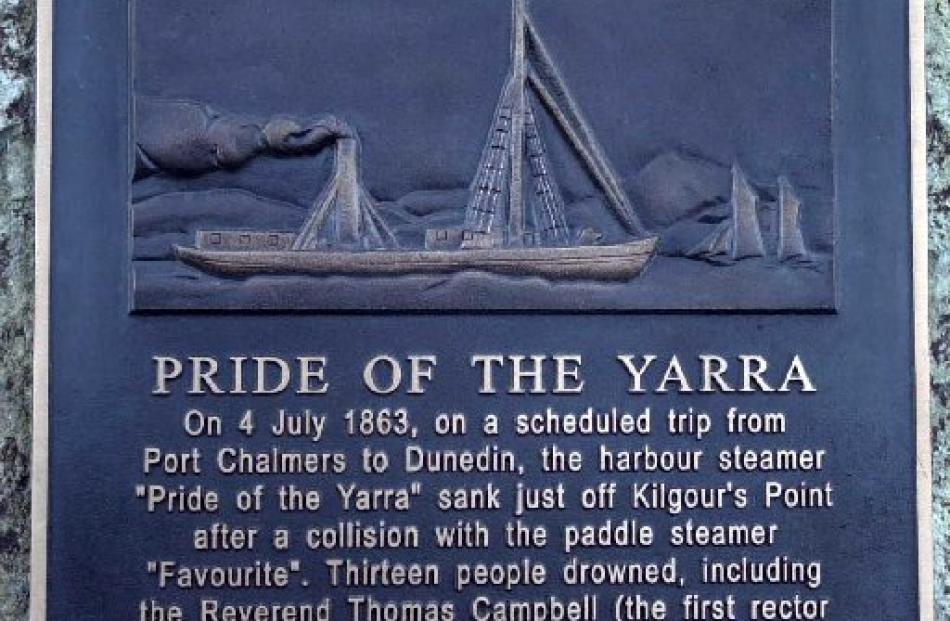 The monument commemorating the disaster.

Many secrets lie hidden beneath the sea around the Otago coast. Nigel Benson and Stephen Jaquiery go shipwreck hunting.

'Pride of the Yarra'

The greatest maritime tragedy to occur in Dunedin waters since European settlement was the sinking of the Pride of the Yarra in Otago Harbour on July 4, 1863.

There was only a ribboned dirt track from Port Chalmers to Dunedin at the time and ships were unable to navigate the harbour, so small steamboats provided a ferry service from the port to Dunedin.

A large welcoming party had arrived at Port Chalmers the previous day to welcome the first rector of the new Dunedin High School (now Otago Boys' High School), Rev Thomas Hewett Campbell, and his family after their three-month voyage from London aboard Matoaka.

The Campbell family and 50 other people, many of who had also just disembarked from the long voyage on Matoaka, clambered aboard Pride of the Yarra, where they sought refuge from the cold in the cabin and hold for the trip to Dunedin.

But just after 5pm, the ferry collided with the paddle boat Favourite off Blanket Bay (Sawyers Bay).

The Otago Witness reported the tragedy:

"The family of Mr Campbell, happy in the knowledge of their arrival at their new home, and so unhappy in their fate at the very threshold - they must have been pressed down and suffocated by the rush of cold, chilling, choking water, under circumstances of agony from the contemplation of which the mind must withdraw, overcome with utter horror," the story read.

A total of 13 people drowned shortly after 5pm that day as the 75ft steamer Pride of the Yarra sank below the waves.

An inquiry subsequently returned a verdict of manslaughter against Favourite skipper Captain Adams and his mate, while Pride of the Yarra skipper Captain Spence was censured for excessive speed.

On July 9, a procession of 2000 people - nearly the whole population of the new Dunedin settlement - followed the funeral cortege from St Paul's Church in the Octagon (replaced on the same site in 1915 by St Paul's Cathedral), down Princes St to the Southern Cemetery, where the Campbell family was interred in block 2P, plot 30.

Less than a month later, on August 3, the Dunedin High School was opened with English master G.P. Abram, who had arrived with the Campbell family aboard Matoaka, as rector.

Matoaka disappeared six years later, on a voyage from Lyttelton to London with all 79 aboard lost.

In 2003, a plaque was laid on the Peninsula Beach Road at Port Chalmers, near where the collision occurred.

One of the best shipwrecks to visit in Dunedin is the steamer SS Victory, at Victory Beach, on the Otago Peninsula.

The Otago Witness reported the incident on July 6, 1861.

"We regret to learn that the Inter-Colonel Royal Mail Company's fine S.S. 'Victory' met with an accident on Wednesday night. She left Otago about an hour before dark with a strong gale blowing from the N.E., and ran ashore soon after 6 o'clock in Wickliffe Bay, this side of Cape Saunders.

"Fortunately she went ashore on a sandy beach; the passengers and mails are safely landed. We understand the vessel is so high upon the Beach, there being only 4 feet water at low tide, and so embedded in the sand, that there is no prospect of her being rescued from her present unfortunate position."

Victory ran aground at the southern end of the beach an hour and a-half later, seven minutes after Hand had taken charge of the ship.

Captain Toogood ran the engines full astern for 90 minutes, but the ship was stuck fast in 3m of sand, so passengers and mail were safely unloaded.

Hand was later prosecuted under the Merchant Shipping Act 1854, found guilty of being intoxicated and in neglect of duty, and sentenced to three months' hard labour in Dunedin Gaol.

However, months later, the ship's compass was found to be inaccurate.

Victory's cargo, equipment and hull were auctioned off on the beach, recovering about 31,900 from the estimated 325,000 loss.

The following year, a salvage operation was launched and the steamer was refloated and her boilers refired.

But, at a critical point, the anchor chain broke and the ship drifted back to the beach and started to break up.

SS Victory's encrusted flywheel can be seen at low tide.