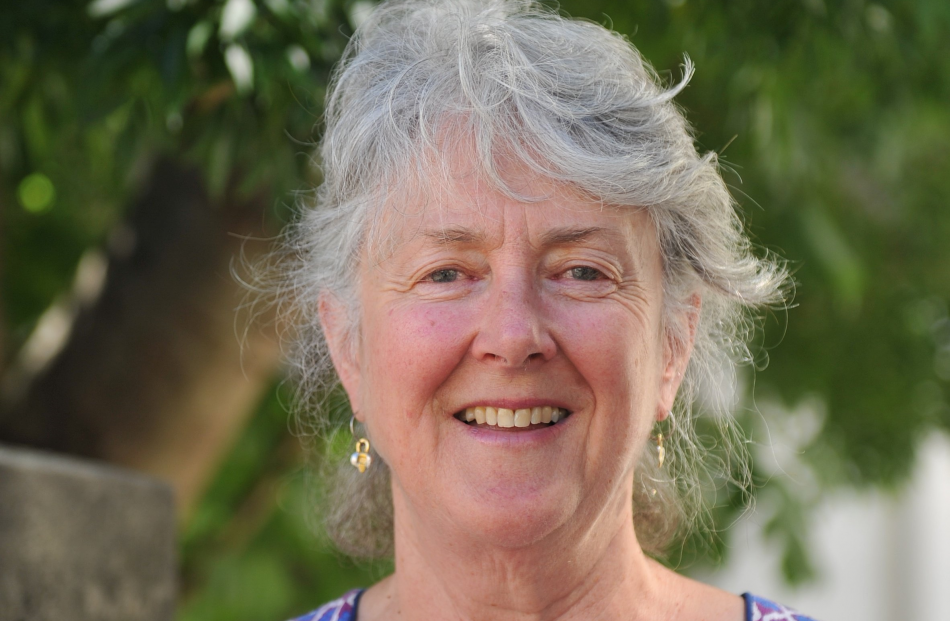 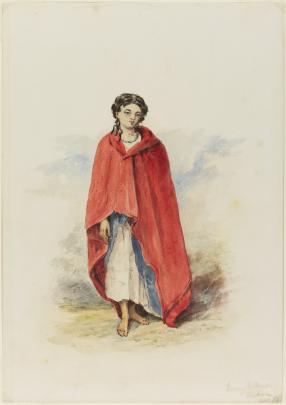 Fanny Weller was the daughter of Maori woman Paparu and English whaler Edward Weller. Born at Otakou, on Otago Peninsula, in the mid-1830s, Fanny was about 13 years old when this watercolour portrait was painted by Ralph E. Erskine. Image from Hocken... 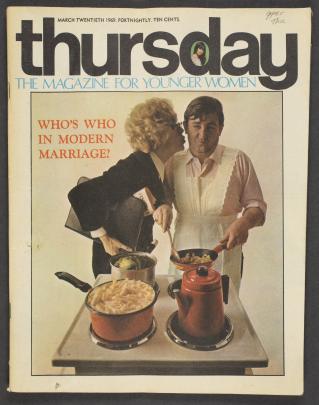 Female and male roles in marriage were among the contemporary, and sometimes contentious, issues discussed in the young woman’s magazine thursday. This is the cover of the March 16, 1970, edition. Photo from Alexander Turnbull Library 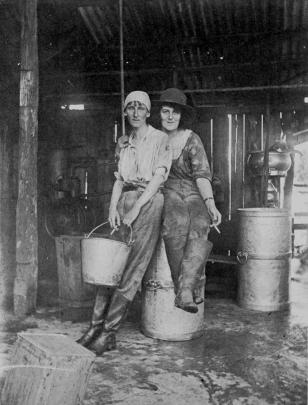 Dorothy Bogle and Margaret Vincent take a smoko break while working in George Northcroft’s cowshed in 1923. Prof Brookes says farm work of various kinds, such as milking cows, tending crops and assisting with shearing, occupied many women, Maori and... 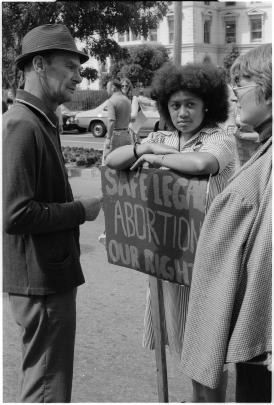 A man debates with two pro-choice demonstrators during the International Women’s Day march in Wellington in 1978. Photo from ALexander Turnbull Library. 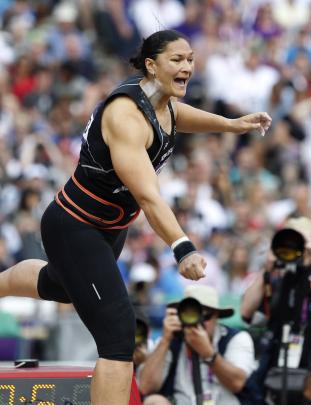 A major new history of New Zealand women was fired, and sustained, by surprises. Professor Barbara Brookes talks to Bruce Munro about the dramatic incomplete transformation of women's lives and the new understandings gained by looking from a different perspective.

A 1930s birth-control campaigner was the unexpected catalyst for a career and what is perhaps a career-defining book.

Prof Barbara Brookes' newest publication is A History of New Zealand Women, a 550-page book that is a culmination of decades of research resulting in the country's first narrative history of its women.

The University of Otago historian was an undergraduate student in Dunedin in the mid-1970s. In 1976, she did a history honours dissertation on abortion in New Zealand during the 1930s.

‘‘At that point, I talked to Elsie Locke, who was one of the founders of a group that was called the Sex, Hygiene and Birth Regulation Society,'' Prof Brookes says.

‘‘Abortion was a live issue for feminists of the '70s. But it was very interesting looking back and finding it had been very much a live issue in the '30s.''

She was fascinated by what she discovered about the conditions women of that time faced attempting to control their fertility.

‘‘I was one of the pill-taking generation. So, it was a revelation to me that they lived from month to month with the agony of wondering whether their period would come. And if it didn't, they took something to bring it on.''

Prof Brookes found diaphragms were available in the 1930s, but were not fitted by doctors. The medical profession of the day was strongly opposed to providing married women with birth control, because it was considered a form of selfishness.

‘‘Elsie Locke telling me about her campaign for birth control in the 1930s, that's what sparked my interest.

‘‘At that point, I realised there was this whole history of women that I did not know about. So, my career since then has been committed to writing about that.''

That career has spanned four decades. It has included nine years, to 2012, as head of the university's history and art history departments. And it has been instrumental in the development of women's history in New Zealand.

‘‘What has been regarded as history up until the 1970s, was men's history,'' Prof Brookes says.‘‘What feminist historians have done is rethink history. That coincided with social history, the history from below. Thinking about everyday people and their concerns and occupations, and importance, in nation building.''

Women's history has given a new way of looking at major events. Turning points, such as world wars, ‘‘play out very differently for women''.

‘‘We could think of World War 2 and all those US servicemen who came to New Zealand for R&R. A group of women married them. Some went to the States to join their husbands. Some didn't.

‘‘Men could get divorced in the States very rapidly, but women here had to wait years because of different divorce legislation.''

Women's history also identifies the importance of events that have been played down because they do not fit the previously defined categories of history.

‘‘Think, for example, of the introduction of the contraceptive pill in 1961. Who did that have a major impact on?

‘‘Or, for example, the raising of the school leaving age to 15 in 1944. That created the expectation that all girls would go to high school. Prior to that, and especially before the first world war, young women either stayed at home until they got married or they might have some short-term employment. Once girls start staying longer at secondary school, they get new kinds of options.''

A History of New Zealand Women had been on Prof Brookes' to-do list for many years. But academic demands, and the complexity of writing a definitive account meant it progressed slowly until a couple of years ago.

‘‘At first what seemed a simple book, a story of women's history, soon becomes much more complex when you think about class, you think about urban-rural, married and unmarried. Dealing with complexity takes time.

‘‘The big challenge for an historian, and what our task is, is to make sense of the mass of everyday life and cut a narrative through it that readers will be able to follow. She wanted the book to not only have all the big issues but to also give a sense of the texture of everyday life for ordinary women.

‘‘When you think about the focus on the productive work of the nation, the primary industries; all that work done by men is only possible because of the domestic work of women. And in the 19th century, that work is all-consuming: lighting fires, washing clothes, ironing them with heavy irons heated on the fire. Domestic life was all-absorbing in a way that we find difficult to imagine now.''

Prof Brookes' biggest challenge in realising that vision of a big yet textured history was doing justice to the extremely different lives of Maori and Pakeha women.

‘‘The Maori population is declining up until the late 19th century. So, there's the tragedy for that community that seems to be fading away at the same time that settler women are having eight or 10 children. And then, by the mid-1930s, Pakeha women are having two children and Maori women are having 10 to 12. So, that means for women a whole range of different needs.''

‘‘One of the really interesting things for me is the way the independence of Maori women was used in Parliament as an example of how wrong it was to deny Pakeha women the right to own property, or the right to have a political voice.''

Another challenge was bringing the story up to date.

But Prof Brookes has researched and written a new-millennium chapter, looking at what has been accomplished and what remains unfinished.

As well as challenges, A History of New Zealand Women has given its author regular, motivating rewards.

‘‘One of the great pleasures for me as an historian is being surprised. We think we know the past, but we don't.

‘‘I found a vignette in a newspaper about Maori women sitting in the gallery in Parliament in 1900 and laughing at the mispronunciation of Maori names by parliamentarians. It's those stories, that give you insights that you didn't have before, which I am particularly drawn to.''

Prof Brookes says she is a little worried people will think A History of New Zealand Women is some sort of encyclopaedia of women, ‘‘when it is more an argument about a history of women''.

‘‘Once, women were tied to the domestic sphere, they were subject to their husbands, they had no legal personhood ... These are incredibly dramatic changes in one section of the population.''

The other part of the argument is that gender is a central colonising concept in New Zealand's history.

‘‘When the explorers visited New Zealand, for example, there was this idea that the position of women was an index of civilisation. So, they are very interested in observing Maori society and seeing how women are treated.''

‘‘Because we need history to tell us who we are.

‘‘Prior to 1993, the centennial of suffrage, most New Zealanders did not know who Kate Sheppard was. Now, most people would probably be able to name the woman on the $10 note.

‘‘But do they know she was part of a temperance campaign? And that temperance was a great movement supporting women's suffrage? ... They were Christian women, deeply involved in church, who wanted to reform society.''

Prof Brookes' students are amazed that formerly women could not own their own property. They are amazed by the fact that prior to 1977, newspapers had separate employment columns for males and females.

‘‘It's the Human Rights Commission Act of 1977 that makes discrimination on the basis of sex illegal,'' she says. ‘‘So, every now and then we have to remind people what the issues were and how they have changed over time.

She hopes this new history will aid that process of knowing and developing.

‘‘I hope it shifts our understandings of the past. I think there is a younger generation that has grown up with rights which they take for granted, and that this might help them see how many of those rights were hard won.''

Not that the job is done, Prof Brookes says.

Women gained the vote in 1893 but could not stand for Parliament until 1919. During the 19th century, when parliamentarians discussed the prospect of female politicians, there were plenty of jokes about being distracted by, for example, a ‘‘pretty colonial treasurer''.

In 1984, when Labour's East Cape MP Anne Fraser went to deliver her maiden speech in Parliament, a politician remarked ‘‘You're a cutie, Anne''.‘‘

So what had changed, that someone still felt free to say that? There is a huge change, but there are still some distressing continuities.''

That gets to the core of how Prof Brookes views the history of women in this country.

‘‘It's not a story of straightforward progress.

‘‘I point out many current dilemmas around the difficulties of combining work and family, the gaps between the educated and skilled, and the unskilled.

‘‘There is a huge gap between young women who get pregnant at 16 and what their life experience will be, and the professional women, most of whom delay childbirth to at least age 30 now. That's a huge transformation. In 1960, the average age of giving birth was around 20 to 22.