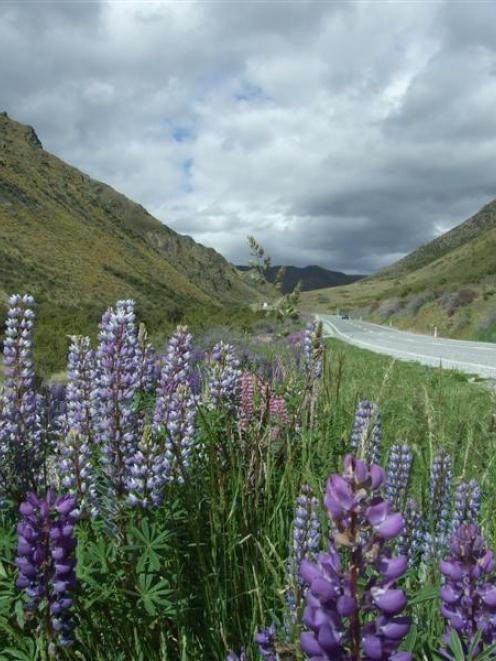 Despite their reputation as a damaging weed, lupins provide a carpet of colour throughout the Lindis Pass. Photo by Catherine Pattison.
Following on from the popular drive destinations series in last year's Summer Times, the ODT motoring team has been out exploring again.

As the silly season begins stuffing Wanaka full of tourists and holiday-makers alike, it is an ideal time to slip away through the majestic hillside and striking lake country that signifies the trip from Tarras to Tekapo.

Inhale with satisfaction as you go against the flow of traffic pouring into town and take a left on to State Highway 8A, where the road forks before Luggate.

The number of motorists dwindles rapidly and before long you reach the country hamlet of Tarras.

It is worth stopping off to have a cuppa at the Country Coffee Shop, or stock up on the local wines and homemade treats that make for bountiful hamper additions.

The up-coming Lindis Valley and Pass have no less than five designated rest areas but the canny traveller can easily spot pull-off areas where they can enjoy the views uninterrupted by others.

If you couldn't face the lines at the Wanaka petrol stations, Tarras has a petrol/diesel pump that may be a better bet for those who dislike queuing for fuel.

Shortly into State Highway 8 the lupins, a summertime stalwart plant, become resplendent in their long, flowering spikes of blues, lilacs and pinks.

Listed as an aggressive weed by the Department of Conservation, the abundant lupins draw in passers-by who are keen to photograph them as a foreground to the sharply-rising hill ranges in behind.

As you travel further into the valley be sure to glance out to your right to see whether an unseasonal dusting of snow coats the top of the St Bathans Range - as it did the day of this December trip.

The tarseal wends its way ribbon-like through the tussocky barren landscape, which is uninhabited for the most part until you exit out of the winding pass.

To mollify drivers leaving the Lindis' grandeur, the roadside before Omarama is decorated with hundreds of small stone cairns.

Piled haphazardly skywards for several kilometres, some are simple, other more elaborate but all are somewhat captivating in their collective construction.

If you happen to be passing through at nighttime, the community-oriented Benmore Peak Observatory is located about 13km from Omarama, atop the nearby Benmore Range at an elevation of 1932m.

Continuing on State Highway 8 and just as you start to tire of counting the segments on the centre-pivot irrigators that march out across the paddocks on route to Twizel, Lake Pukaki dazzles the eyes with its glacier-fed, aquamarine hues.

The visitor centre nestled into stacked boulders is a great scenic stopover spot.

There are toilets, picnic tables upon which to unpack that hamper and on a clear day there are breath-taking views of Mt Cook and the Southern Alps.

Heading round past the lake, we took a divergence from State Highway 8, turning left along the Tekapo Canal Rd.

The advantages of doing so are three-fold.

Firstly, from a visual viewpoint, you hug the lakeside for longer. Then, turning inland you will find the Mount Cook Salmon Farm located in the hydro-electric canal.

A gem for fresh fish lovers, it offers self guided tours - including feeding the salmon - and the produce can be bought in either whole, fillet or steak form.

Lastly, the alternative route encompasses the rather spectacular, huge, red pipes that feed the power-generating turbines.

Just when memories of Lake Pukaki's brilliance are dimming, you are greeted with the similarly spectacular Lake Tekapo, glimpsed through pines as you enter the popular tourist spot.

If you can brave the busloads of Americans and Japanese, it is a nice place to park up and enjoy the turquoise waters nestled within the heart of the Mackenzie District.