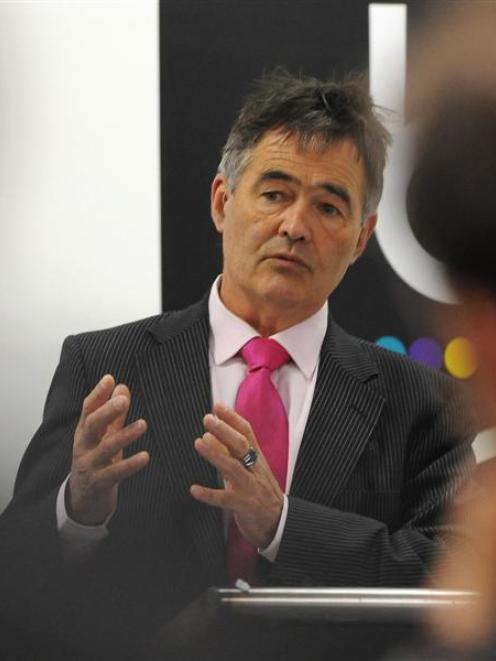 Dunedin Mayor Dave Cull addresses business leaders. Photos by Peter McIntosh.
If a week is a long time in politics, six months may seem like an eternity to the five Otago mayors who ended up in charge after last October's local government elections. That anniversary passed this month, and the Otago Daily Times asked our leaders for their thoughts on their term so far, and the highlights and low points of running a city or district.

Dunedin Mayor Dave Cull rode into power on a wave of displeasure with the previous administration, gaining the leadership with promises of a more open and transparent council that would be more frugal than the last version. 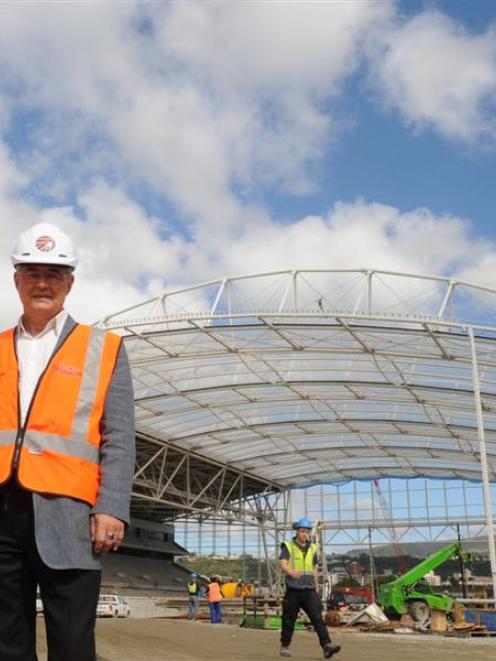 Continuing issues with the stadium provided the opportunity to be more open, Dunedin Mayor Dave Cull says.
Before the election, Mr Cull criticised a council he said did not engage genuinely, had not listened to the public, and had no cohesive, connected view of the projects it was involved in.

Since the election, he has been criticised, sometimes unfairly, for holding meetings with the public excluded.

He has also found, with the development contributions debate for instance, a sector of society complaining policies were being dropped on them with no consultation.

Earlier this year, Mr Cull told the Otago Daily Times running a more transparent council was a harder job than he thought.

Asked about the issue last week, he said his "default" position was things "should be done in public when they can". 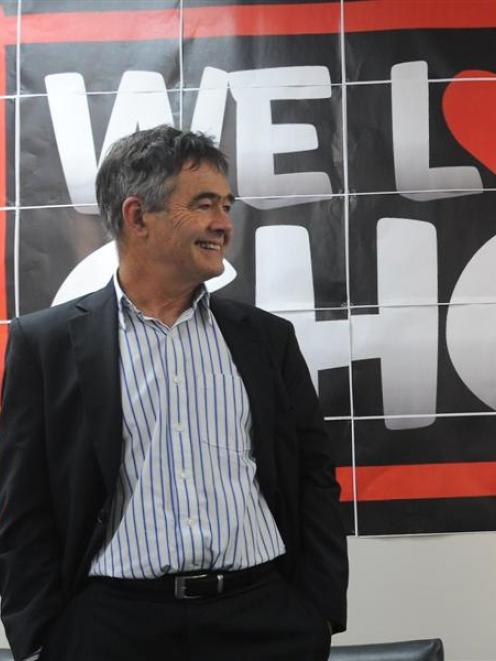 Dunedin Mayor Dave Cull at the Christchurch Embassy at the Community Gallery.
"However, there will always be situations where for commercial sensitivity reasons, whether it's the purchase of land, or there are other people involved, or the sale of property, where in the interests of other parties as much as anything, we need to do some things discreetly and then announce the decision."

Mr Cull said he had put information out before it had to be released.

"An example of that was the unfunded items for the [Forsyth Barr] stadium.

"I put them in front of the council and the community and at the time people said 'why are you doing this, because they haven't even asked for the money yet?'."

Mr Cull said, in that case, it was proper for the council and the community to know about the issues prior to any request.

"I guess what I'm saying is where I can, I endeavour to keep things out in the public eye, but it isn't always possible."

Transparency was not the first subject Mr Cull broached when he was asked for his thoughts on his first six months.

Instead, it was a "vision" for the city, and the role of consultation in that vision.

"I think we've been able to progress the mechanism for that quite well, through the development of the Your City Our Future (YCOF) leadership groups."

Those groups, which included leaders of Dunedin's business, tertiary education and social services sectors, and a wide range of representatives from arts and culture to walking and cycling groups, came together under YCOF, a community engagement programme begun last year to help shape the future of Dunedin.

Mr Cull said the YCOF groups were originally set up with a finite timeframe in mind.

But such had been the enthusiasm and the output of most of them, "we have got council buy-in to keep these in place with a number of functions".

Those included being a conduit for community opinion on certain issues, and a repository for the expertise and experience in the community.

"The idea is to develop a community and council consensus on the vision in any particular area, and then you can say 'right, the council is not imposing it'.

"That's not saying there won't be differences of opinion and the council won't have to make the final decision, but it's a decision informed by consultation on the one hand, and the expertise and experience of these groups on the other.

"The development contributions policy is probably one that couldn't have been developed by the people who are most vocal about it, because they would have just said 'no, we don't need it'."

Asked if the job was harder or easier than he expected, Mr Cull said he hadn't really thought about how hard it would be, "though I was warned I wouldn't have a life of my own".

The hours were onerous, and the job was demanding, not just in terms of the time involved, but because the mayor had to be on top of most issues.

"As a councillor you have certain responsibilities and certain working parties and committees and that's what you focus on.

"I've found you can't have in-depth knowledge of every detail of everything that I would have had, as a councillor, of certain things.

"I have to understand the essence of each thing, and I have to rely on the councillors who are chairs of those things to drive them and understand them."

The job did, he said, affect family life.

"That's a matter of managing the time and prioritising, because no matter how important the job, I don't see why my family or personal life should be sacrificed completely for it.

"I don't intend to let that happen."

And the job did open him up to the sort of aspects of New Zealand life that could restore faith in human nature.

"There's an incredible amount going on.

"I guess that's one of the things that's come as a revelation."

That was reinforced when Mr Cull visited Tauranga for the national TrustPower community awards, and he saw the amount and the range of work that was being done by volunteer groups.

"It's absolutely staggering, across the country, and just as much in Dunedin.

"The range of interests and the range of effort that goes in ... an example the council was involved in was the Christchurch embassy [in Dunedin following the February earthquake].

"We put two or three staff people in part-time facilitating that, and the volunteers just grabbed it, took leadership positions, organised it, sorted it and went for it.

"It was an incredible effort, and that sort of thing's going on all the time."

Mr Cull said he could promise certain directions during the election, but ultimately getting major change was up to the council.

"One of the things I find really challenging, given the number and range of important things in front of us, is council finding the time to get together and consider them properly and chew them over, progress them.

"Because it's not a matter of tossing up a couple of black and white choices."

THE MAYOR
• Name: Dave Cull
• Age: 61
• Council experience: Three years as councillor, six months as mayor.
• Best thing about being mayor: I can make more of a difference now than I could before I was mayor.
• Worst thing about being mayor: The risk that it could swamp my family life.
• Biggest surprise during this term: The incredible amount, and range, of work done by volunteer groups. 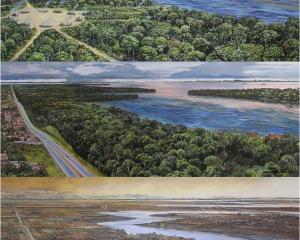