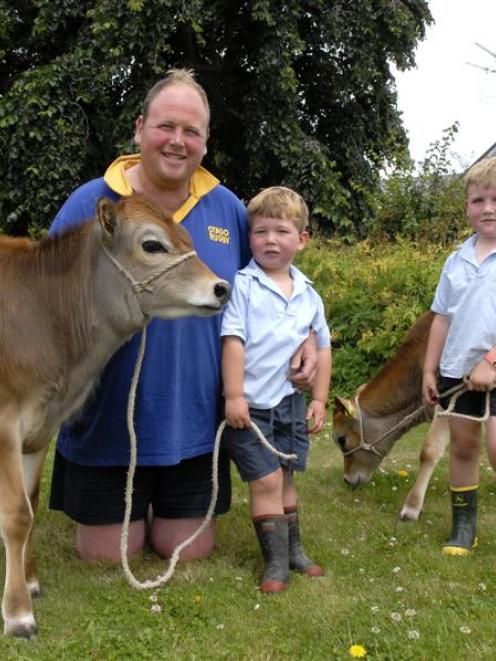 Kelly Allison and his boys Reuben (3) and Flynn (5) with two of the calves they intend to show. Photo by Gregor Richardson.
Be it pet calf, prized cattle beast or preserved fruit, the Otago-Taieri Agricultural and Pastoral Society's 150th anniversary show next week promises to stir rural passions. It might even prompt some to breed, writes Shane Gilchrist.

Next weekend will be a big one for those who live at Bonacord Farm, on the Taieri.

Cows will be shampooed, their coats clipped, udders cleaned.

Like their owners, the Allison family, the animals will break with dairying's daily routines and head to a show.

And it's not just any show.

Next weekend marks the 150th anniversary event for the Otago-Taieri Agricultural and Pastoral Society.

It is hardly news that the day of a dairy farmer begins in the small hours.

However, next Saturday alarms will bray a little earlier in the Allison household, sometime around 3.45am, though dad Kelly suspects his oldest boy, 5-year-old Fynn, might not need any aural prompting.

"Fynn usually gets up fairly early.

"He gets hyped up, ready for the day.

"By about 2pm, after the grand parade, the kids hit the wall ...

"We'll be up nice and early to get the milking done then load the cows and take them to the show.

For the Allison family, the show is notable because it includes among its competitions the South Island Ayrshire championship.

"Not one of the big breeds", chewing their cud in the shadow of the higher-producing hybrid beasts, Ayrshire dairy cattle nevertheless have a strong Otago connection, Mr Allison says.

"Ayrshire are from Scotland.

"They were first landed up the Otago Harbour ... over the years their popularity has dwindled a wee bit," explains Mr Allison who, despite the demands of a 600-strong dairy herd, is currently enjoying a run of success, having won "supreme dairy animal" ribbons at the recent South Otago and Milton shows.

Mr Allison, the immediate past president of the Otago-Taieri A and P Society, has been going to shows for as long as he can remember.

Like his three children, he was introduced to the rural showcase by his parents; by the time he turned 5, he was "actively involved".

"I enjoy it and have carried on with it.

"I have a brother and sister but, at this stage, I am the only one actively involved in the dairying business and in breeding and showing dairy cattle.

"There is obviously kudos in doing well in shows.

"You build up a name of having quality stock.

"I don't play golf, so in the summer time we do showing.

"You become involved with the breed society. There are field days and herd walks.

"There is a lot of camaraderie among breeders, which is nice.

"When we get to a show as an exhibitor we are very much focused on winning or doing the best we can, but once the serious part of the showing is over we have a job to relate to the public.

"I have no problem when people ask if they can pat the calves or want to talk about the cows.

"I get the biggest satisfaction in seeing my son doing well with his pet calf.

"He comes back beaming from ear to ear.

"The best he has done is a second."

Mr Kelly concedes there is a fine line in maintaining the tradition of an A and P show while also attracting younger people or those from a more urban background.

"It is quite a tricky one.

"You have to try to maintain tradition but look to move with the times.

"Some of the things we've tried to do is look at getting attractions that are not strictly agricultural but might bring in a crowd, such as the Topp Twins or Levi the Mitre 10 man [both of whom will appear next weekend].

"We've had motocross in previous years.

"It's about trying to get a balance, sticking with our mission statement of excellence in the agriculture sector, or something like that, and also get as many people out of Dunedin along to the show.

"For many people, it's the only contact they have with some rural activities.

"They come along and see the sheep, cattle, tractors and things.

"I think our biggest issue - and we are not alone in this - is attracting newer, younger members to the movement and getting them to help run shows and other activities.

"I know the Royal Agricultural Society of New Zealand is focused on developing youth.

"I've gone to a conference last year where I was a minority because I was in my 30s ... you have got a lot of retired-age people."

Bob Jury, president of the Taieri A and P Society in 1974-75, has been involved with the group for 55 years.

The 86-year-old, who joined the society in 1954, recalls attending his first show on the Taieri as a boy.

"I was brought up down the Peninsula, at Highcliff, until the age of 9.

"We used to go to Portobello show but my first show on the Taieri was in 1932 when we shifted to the area.

"I was brought up on a farm, was interested in stock.

"We've had a terrible lot of people join the society then just melt away, but I've stuck with it," says the life member, who has witnessed the show's changes over the years.

"It has got different.

"There are a terrible lot of horse events in the show these days ... there used to be more stuff.

"There are not near the amount of sheep and cattle."

Yet some traditions remain.

Mr Jury's 19-year-old granddaughter, Jennifer, like her mother and grandmother, has put entries in the show's baking and floral art competitions.

According to April Anderson, who has trawled through close to a century and a-half of minutes from society meetings, the voluntary labour undertaken over the years by committee members, although hard work, also had a social dimension.

"The farmers of the Taieri Plain banded together as much for social reasons as economic and educational ones.

"The show was the highlight of the year.

"One dressed up for the show and for many it was an excuse to acquire new clothes.

"Everyone, including town dwellers, in the early years had a close association with the land.

"Going to the show was as traditional for both town and country people as going to church on Sunday," Mrs Anderson writes in a booklet to be published after the 150th event.

Mrs Anderson (60), who has been married to a farmer for more than 30 years ("our dairy farm is on the Lower Waitaki plains, so I have a good knowledge of farming generally"), headed to Dunedin in 2000 to "try the university life".

Three years later, she graduated with a bachelor of arts (history).

Hence, she was a logical person to take on the job of condensing the society's minutes.

"My maternal family [Wither] has a long association with the Taieri A and P Society, so I was pleased to help .. .

"I had no idea of the extent of the work involved.

"The fact the past 60 years of minutes were mislaid for a time made it a bit manic.

"I have been trawling through the minutes on and off for quite a few months.

"They are kept at the Hocken Library and made riveting reading."

It seems the society was not enthusiastically supported.

An editorial in the Otago Witness on February 22, 1851, described the attitude of its members as "listless", "apathetic" and "grudging".

Sensing impending failure, the annual meeting in Dunedin of the Otago Agricultural Society, on May 31, 1852, suggested that: "district meetings be held for the furtherance of the objects of the society".

On August 7, 1860, a meeting resolved to form an agricultural society in the district.

The Taieri Agricultural Society welcomed all settlers in the province but, more particularly, those living in the districts of west, north and east Taieri, Green Island, Saddle Hill and Otokia (or Moeraki Bush, as it was then called).

According to Mrs Anderson's history, the objectives of the Taieri Agricultural Society were"

"the advancement of agriculture, the improvement of livestock and the promotion of those arts which agriculture and the rearing of stock are associated, by annual competitions, lectures, the reading of papers on practical subjects and discussions on the same, and any other measures calculated to advance the interests of agriculture".

Despite heavy falls of rain and snow the previous night, 39 competitors took their allotted one third of an acre of ground, the entries comprising 28 bullock-drawn ploughs and 11 horse teams.

A century and a-half on from such inaugural endeavour, the excitement remains.

It is on record that should young Fynn Allison, a boy ever keen to lead his calf to competition, have to choose between livestock or family celebrations, the cow would win.

"My sister's getting married a couple of weeks after the show," dad Kelly explains.

"At one stage she was thinking about having it on the weekend of the show.

"Wee Fynn said he couldn't come to the wedding if it was the same weekend."

The show
- The Otago-Taieri A and P Society's 150th show will be held at the A and P Showgrounds, Mosgiel, from January 22-24.

Footnote
Strictly speaking, the Otago-Taieri Agricultural and Pastoral Society's 150th anniversary show reflects the latter group's establishment on August 7, 1860, when, at a meeting in an East Taieri schoolhouse, about 40 people voted to form the Taieri Agricultural Society.

The meeting was prompted by another attempt at the formation of an agricultural society encompassing all the districts circling Dunedin.

The Taieri settlers dismissed a large central society as being impractical.

Acknowledgement was given, however, of the possibility of a connection in the future with a central society that united all the district societies "if it were established".

The Otago Agricultural and Pastoral Society was formed 16 years later, on December 19, 1876.

The Otago A and P group was a metropolitan association that served as a central governing body for the various district societies scattered throughout Otago (except for North Otago).