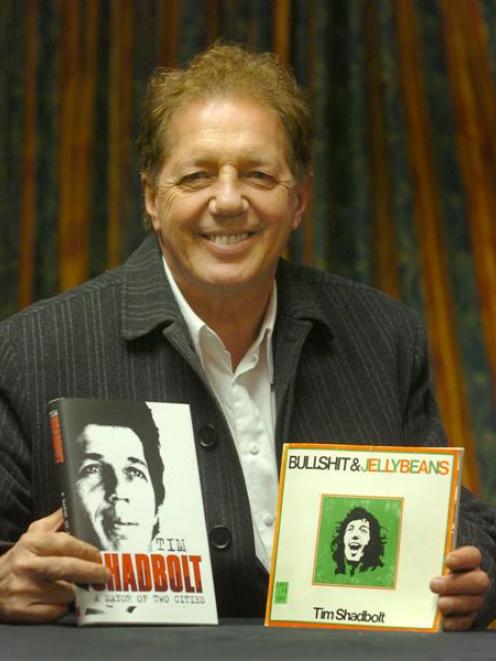 Mayor Tim Shadbolt with his two books.
Why should he care? He's mayor and has a new book out. Hamish McNeilly talks to New Zealand's southernmost civic leader.

The young, radical version of Tim Shadbolt may not like his present-day incarnation, but the Invercargill mayor is having too much fun to care.

With the follow-up to his best-selling book Bullshit and Jellybeans about to hit the bookstores, Shadbolt admits the leaner, meaner "radical Tim" would "seriously challenge" the 61-year-old "Mayor Tim".

While his younger self made his name baiting authorities on issues from the Vietnam War to the Springbok tour, the older, arguably wiser, mayoral version has turned into a crowd-pleasing entertainer - or as the dustjacket of A Mayor of Two Cities puts it, "one of New Zealand's most loved celebrities".

In recent years, his trademark grin has appeared on entertainment shows rather than the six o'clock news.

He has appeared in the prime-time favourite Dancing With the Stars and has even beamed down from the big screen thanks to a bit part in the New Zealand box office smash The World's Fastest Indian.

But it was in his appearance in an episode for the travel series Intrepid Journeys that the public finally got to glimpse the man behind the caricature.

While filming in Borneo director Melanie Rakena told him to stop performing for the camera.

As a result, "Mayor Tim" was stripped back further to a more essential "Tim".

Gone was the showmanship people had come to expect; the flashy grin, the humourous anecdotes.

Instead viewers were treated to a different on-camera version of Shadbolt, a quiet more reflective version.

Confiding in his new book A Mayor of Two Cities, which is in stores this week, Shadbolt says he often appears on television in character as "a cross between Fred Dagg and Steve Irwin", but during the filming of Intrepid Journeys he was encouraged to stop playing to type.

"That was some of the best TV direction I have ever had," he said.

So beware the public front.

Shadbolt admits that even the catchphrase widely attributed to him - "I don't care where, as long as I am mayor" - was the brainchild of an Auckland ad agency.

Because Shadbolt has been so much in the public eye, many of the stories in his latest book are comfortably familiar, a far cry from the turned on, tuned-in writings of Bullshit and Jellybeans 37 years ago.

"When tired old politicians claim that they are facing reality what they often define as reality is political expediency," he wrote in Bullshit.

His latest book has been described as a sequel by the publishers, but "it is not really," he admits"Bullshit just covered the 1960s, the latest book takes in the '70s, '80s, '90s up to today and it takes in a lot of my life."

The reader will note some stylistic differences.

Bullshit has the poetic ramblings of New Zealand's own Jack Kerouac and the reader is swept into a world where Shadbolt - rightly or wrongly - was fighting for a better place.

It has since been used as a university textbook, an unlikely propect for A Mayor of Two Cities.

"In this book I just wanted to cover the events, but in the next book I would like to write about the people I have been involved with," Invercargill's Mayor says.

And the proposed title for the final book in the trilogy? Yes, Your Worship, he says.

There are some issues left squarely in the past in the latest book.

Whereas the young man wrote passionately about cannabis, the civic leader stays mum.

"This is an issue I have shied away from. Once I get into the position of mayor I tend to think I represent the people of the city and my personal views aren't relevant," he says when asked.

He still has personal views, mind, and they are less likely to be influenced by others than was the case for the young Shadbolt.

"When you get older, you develop your own ideas and values," he says.

"I feel comfortable with who I am."

So, the man who was arrested 33 times finds himself as perhaps New Zealand's most famous mayor, with the mayoral chains and car to match.

Describing his relationship with Invercargill as symbiotic, Shadbolt said he doesn't see any point in leaving the city, a name he now pronounces with a distinctively Southland burr.

"Even if I am not the mayor, I would be an ambassador of some kind."

The truth be told, he does care where he is mayor.

While he has been asked to stand for mayor in other parts of the country, including the proposed Auckland super-city, Shadbolt insists he has learnt his lesson and Invercargill is his home - so much so that he reckons he will retire there.

"I would stay in the South. It is because the city gave me a chance to redeem myself," he says.

Comfortably into his fifth term as mayor of Invercargill, Shadbolt says he wants to stay in the job until he is 70 - leaving him another three elections to fight.

Not that he is too concerned.

A mayor of two cities picks up with Shadbolt trying to peddle his battered manuscript of Bullshit and Jellybeans, written from the prison cells of Mt Eden and Mt Crawford.

Some of the same off-the-wall stories are there in the new book, the girls, the parties the adventures, but in the latter half of the book issues are replaced by a veritable CV of achievements as mayor of Invercargill.

From the protests of the 1960s, Shadbolt became the radical of the 1970s; visiting China in 1976, spending several years in a commune near Huia, and joining Whina Cooper's Maori land march.

But none of that was paying the rent, which is where the next of Shadbolt's talismans comes in - the concrete mixer.

In fact, it was a quip about towing it behind the mayoral Daimler that helped him win the mayoralty of Waitemata City in 1983.

His grip on the Waitemata City mayoralty lasted six eventful years, but his hold on the mayoral chains was much shorter, and to the delight of many, including the press, he lost them - twice, in December 1985.

On the first occasion the chains went missing, they resurfaced later at the police station lost and found, but when they disappeared a second time, they were never recovered, an embarrassment that still "haunts" Shadbolt.

"It is a mystery that has to be resolved," he says.

But it was the loss of the Waitakere (an expanded Waitemata City) mayoralty in 1989 coupled with the collapse of his marriage that forced a burnt-out Shadbolt to almost admit defeat.

And then Invercargill saved him.

Following the death of the city's mayor, Eve Poole, Shadbolt was invited to run for the mayoralty in 1993, effectively splitting the vote and claiming a surprising victory in the City of Water and Light.

Seemingly picking up where he left off up north, Shadbolt again courted controversy, including running for New Zealand First in the Selwyn by-election in 1994.

The decision was met with disapproval by the Invercargill public and he was defeated in the 1995 mayoral race.

To the surprise of locals, Shadbolt stuck around and, after an abortive attempt as a candidate for the Aotearoa Legalise Cannabis Party, had another crack at the Invercargill job in 1998.

With the city seemingly facing an irreversible decline in house prices and population, Shadbolt was able to wrest the mayoral chains from his more conservative counterparts by promising a bold new future.

Since his 1998 victory, both city and mayor have enjoyed a vast turnaround in fortunes. Under Shadbolt's stewardship, the city has reaped the rewards of a booming hinterland, while an innovative free fees scheme at the local polytechnic has brought young people back to the city.

Some of his grand schemes, such as an Invercargill viewing tower, a vineyard in Bluff and a monorail to Queenstown, have generated nothing more than enthusiasm and media headlines, but other initiatives have struck pay-dirt.

Shadbolt says one of his favourite success stories is his pigs-might-fly punt to save the lives of 17 Auckland Island pigs in 1999.

Approached by members of the Rare Breed Society to help the half-starved pigs, Shadbolt dipped into his rarely used mayoral contingency fund.

The cost of feeding the pigs skyrocketed from $1200 to $13,000 and ratepayers were not amused, and the fund was promptly taken from the mayor.

However, the feral pigs with the voracious appetites, and breeding habits to match, were found to be virus-free.

Now, a biotech company is exploring their potential in the fight against diabetes, and construction of a $2.5 million piggery on the outskirts of Invercargill is about to start.

"Not a bad investment."

Invercargill is starting to look like a good investment to others too, on the back of dairying, a lifetime supply of lignite under the ground, and oil companies exploring the Great South Basin.

The city has given Shadbolt more than just a salary, mayoral chains and a presidential-looking Chrysler 300C - he also found love.

While Shadbolt admits his relationships haven't always worked out in the long term, he has enjoyed much romance and adventure "I consider that I've been a very lucky man all my life when it comes to wives, fiancées and girlfriends."

After a celebrity debate at the Civic Theatre, Shadbolt, then a "battered and bruised 46", met Asha Dutt, "a very young-looking 21".

Despite comments about the couple's obvious age difference, they have remained together and Shadbolt credits her with the revival of his fortunes, not to mention the change in his dress sense.

When asked if they will ever marry, Shadbolt admits he has had several proposals turned down.

A Mayor of Two Cities is dedicated to her with the inscription "To Asha, for getting me back on my mayoral feet".