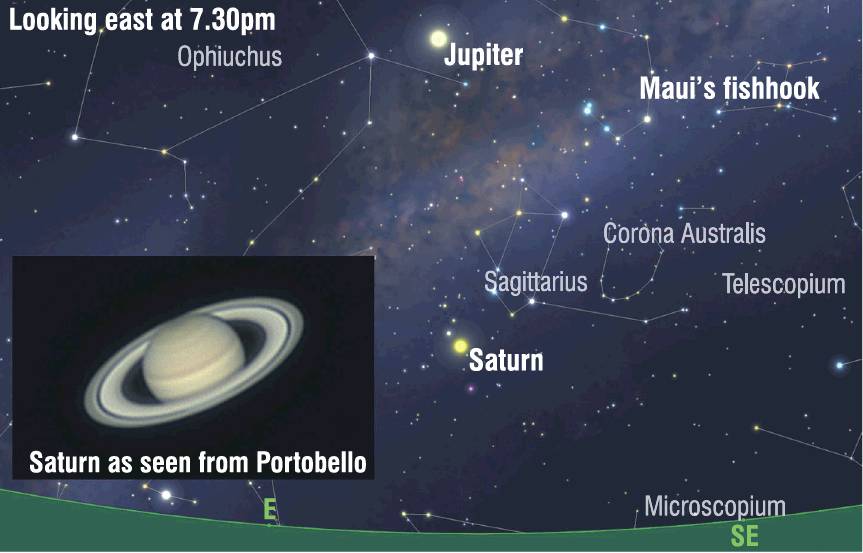 With Jupiter dominating the night, it's easy to forget that another gas giant planet, the beautiful Saturn, is also on view, writes Ian Griffin.

You really can't miss the planet Jupiter at the moment; it is visible as a bright yellow-white ''star'' low in the east as darkness falls.

The planet is just to the left of the distinct hook-shaped ''sting'' of the constellation Scorpius (also known as the fishhook of Maui, the legendary celestial implement used to raise New Zealand's North Island from the depths of the Pacific).

By the middle of the night, Jupiter is high in the sky and shining brighter than any other object in the heavens. If you have a telescope, you will certainly be pleased if you point it towards Jupiter. I, for one, am always excited by Jupiter and find it fascinating to observe the ever-changing positions of its four bright moons and the complex cloud structures in its thick atmosphere.

With Jupiter dominating the night, it is easy to forget that another gas giant planet is also on view.

As this week's chart shows, if you head out at 7.30pm, Saturn can be seen directly below Jupiter in the eastern sky. Saturn is quite close to the famous ''teapot'' of stars in the constellation Sagittarius.

The two gas-giant planets are on either side of the central part of the Milky Way, which makes for a breathtaking sight if you are observing from a dark spot well away from streetlights.

While Saturn isn't as bright as Jupiter, what it lacks in brilliance is more than made up by in terms of beauty. Even after more than five decades of stargazing, I have to confess that Saturn still inspires a gasp of wonder whenever I catch a glimpse of the planet and its ring system through a telescope.

The insert on the chart is a picture of Saturn I took from my back-garden observatory a few days ago on a night when the sky was wonderfully clear.

This week, Saturn is more than 1.3 billion kilometres from Earth. The light you see, travelling at 300,000km per second, has taken an hour and a quarter to reach your eyes.