Striking it unlucky in the gold fields 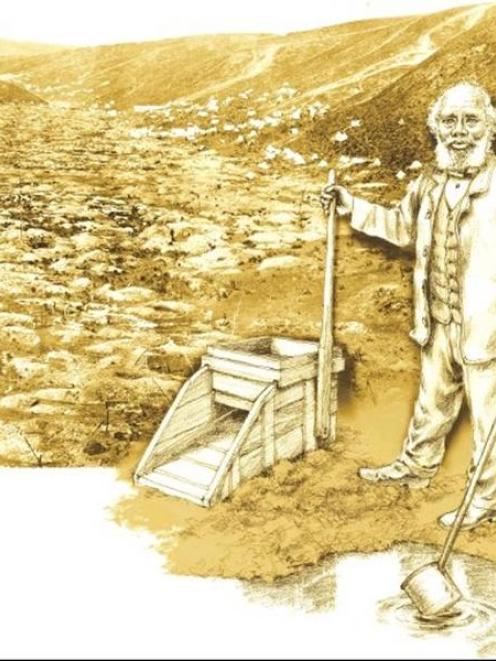 Black Peter against the backdrop of Gabriel's Gully. Image by Hayden Smith/Otago Witness
For many, Gabriel Read is the key figure of the Otago gold rush. What is much less well known is that an Indian prospector, Edward Peters, beat Read by three years to locate Otago's first viable gold field. Clutha reporter Glenn Conway talks to a man determined that the story of "Black Peter" is preserved

Glenore man Alan Williams has been on a mission to right a wrong he believes lies at the very heart of Otago's history.

The wrong, originally perpetrated, he says, by local government officials back in 1858, then repeated by historians from that year onwards, was a failure to acknowledge the efforts of an Indian man, Edward Peters, as the discoverer of the first workable gold field in Otago in 1858.

That date is a full three years before Australian prospector Thomas Gabriel Read - the man who nabbed all the headlines and much of the glory - made a similar find near Lawrence and ignited the Otago gold rush of 1861.

Read's find is widely regarded as being the catalyst for the development of the entire national economy and certainly bankrolled nearby Dunedin to become the biggest city of its day.

As Lawrence prepares for the 150th anniversary of Read's discovery with extensive sesquicentennial celebrations in 2011, the tiny settlement of Glenore, about halfway between Milton and Lawrence, near the entrance to the Manuka Gorge, is gearing up for its own party to celebrate the efforts of "Black Peter".

It was in this area that Peters found gold, in the south branch of the Tokomairiro River.

It was significant enough for Otago province's head surveyor, J.T. Thomson to describe it as "the best sample of gold yet brought to town". Indeed newspaper reports of the time referred to the "Tokomairiro gold fields", though little interest was aroused, according to W.R. Mayhew in his book Tuapeka: The Land and its People.

Gold was then regularly in the headlines, as reports came in during the 1840s and early 1850s of the gold rushes in Siberia, California and Australia.

By 1851 there had already been some excitement in the North Island at the Hauraki field, before Nelson drew prospectors in the middle years of the decade.

By this time surveyors working in Otago had regularly noted the presence of gold, though little further exploration had been undertaken.

This was the New Zealand Peters found when he arrived from Bombay at Port Chalmers as a cook on the sailing ship Maori in 1853.

After spending six weeks in the Dunedin jail for taking leave from the Maori, he travelled south into the Molyneux area before venturing towards Central Otago.

Settling in the Glenore area, Peters took work as a hut builder and bullock driver and began prospecting in the local streams, drawing on his experience of the California gold fields.

He found gold in about 1857 at Tuapeka and used it to pay for his provisions.

In 1858, some of his gold was presented to a Mr Dawson who had, with two shepherds, helped drive sheep to the property of Inch Clutha farmer Archibald Anderson.

That gold was fashioned into a ring for Dawson's wife and can be seen at the Otago Settlers Museum.

It was such efforts that were drawn to Gabriel Read's attention on his arrival in the district in 1861, and caused him to prospect in the area where he came across "a beautiful soft slate and saw the gold shining like the stars in Orion on a dark frosty night," as he famously wrote.

Indeed, the very day before Read's momentus discovery, he had met a George Munro who described Peters' workings to him.

One of the reasons why Peters' efforts were overlooked was his lack of expertise, compared to Read. Peters had mining experience in California, but it was limited to the piece of equipment known as a goldminer's cradle.

As a result, he knew something of the nature of the wash dirt in which gold was usually to be found, but of the practicalities of turning such opportunities into a strike, his experience was limited.

Nevertheless, there is evidence he had an eye for where gold might be found.

While on one of his sledging excursions to deliver food to other shepherds, he crossed the Tuapeka stream as usual by driving the bullocks through and crossing by stepping stones himself. This was done at Hopkin's Crossing, near which now stands the Evans Flat mill.

As he was taking a pannikin of water from the creek to slake his thirst, the thought struck him to try for gold by scooping up some silt. He was rewarded with a rough speck of gold.

On other occasions he found other prospects, and these resulted in a John Thomson, who was afterwards manager of the Nil Desperandum and Victory mines at Waipori, setting out with Peters, and an African-American man, to further investigate his finds.

They persisted for about three months, but obtained only a few ounces of gold.

Peters' lack of technical proficiency was again shown up.

"Everywhere this early party obtained the colour but they were unsuccessful in keeping their claims free of water or in saving the gold sufficiently well in the cradle," according to Mayhew.

Thomson recalled later: "I believe we lost more than we gained".

Another contemporary of Peters described his efforts as "only hen-stratching".

Mayhew records that "According to Thomson they even tried the head of Gabriel's Gully".

Of course Gabriel Read, an experienced miner by the time he arrived in Otago, did rather better there. Thomson returned to the gully following Read's claim and also made money, but Peters moved on.

One of the early groups in the gully won 127 ounces in nine days and gold worth £5000 in two months.

Mr Thomson was afterwards a pioneer in opening the Kaitangata coal mine.

Black Peter himself returned to his previous employment, before moving to live at Balclutha.

He was finally taken to the Benevolent Institution, in Dunedin, where he died in 1893 without experiencing the wealth that might so easily have followed his endeavours - not that he let the matter drop.

Even without winning gold from the ground, there were riches to be had for those who first found where it lay.

In 1857 a petition to the Otago Provincial Council had asked that a "handsome reward" be offered for the discovery of a "remunerative" goldfield in the province.

The council responded, nominating a sum of £500 as a "Bonus for the discovery of a Remunerative Goldfield within the Province of Otago".

So the matter of who was first to discover gold around Lawrence was not simply a matter of getting the history straight, there was serious money at stake.

Peters applied at least twice for the money.

In 1861 he did so with the help of John Foster, of Kaihiku Falls. The application was refused. A note attached to one of his applications reads: "Received 12th July, 1861 - Disposed of".

It was not until 1885 that any public recognition of his services was made - a payment from the council of £50.

This was a "tardy measure of justice", according to Mayhew, granted Peters "on condition that a similar amount be raised by public subscription". The sum was duly raised.

Alan Williams says Peters was unfairly denied the financial rewards his find justified due to the "local politics at the time".

Read, on the other hand, pocketed £1000 after the Provincial Council doubled the earlier promised sum.

In one of those strange twists of fate, Read was also denied a happy ending, dying in a Tasmanian asylum a year after Peters' death.

The rights and wrongs of those 19th-century goings on will get another airing this weekend, at a gathering at the Glenore river flat.

The gathering will double as a book launch for Mr Williams' research on Peters and the unveiling of a plaque to Peters.

Mr Williams has spent the past eight months looking into the tale of Edward Peters.

The result of his labours, poring over copies of the Otago Witness and trawling through the archives of the Alexander Turnbull Library, Hocken Library and New Zealand Archives, is Edward Peters (Black Peter) The Discoverer of the First Workable Goldfield in Otago.

Despite his proximity to the various locations of the 19th-century drama, Mr Williams' research did not involve attempting to retrace the prospectors' footsteps.

In fact, Mr Williams very rarely dips a gold pan in the Tokomairiro River, which runs near his home.

"I'm more interested in the history than actually doing it," he says.

A large rock, weighing more than a tonne, will be the focal point of tomorrow's commemorations.

Governor-General Sir Anand Satyanand, himself of Indian descent, will unveil it and a specially made plaque at 2pm.

The Milton Rotary Club gave $1300 of the $1500 cost for the plaque, while other groups to help towards the occasion include the Milton Lions Club, Milton Country Club and Otago Goldfields Heritage Trust.

The monument will soon afterwards be moved to its final resting place at the more publicly accessible spot of Mount Stuart Reserve.

Mr Williams is happy with the final result and "really quite excited" about the gathering, which he says has been more than 150 years coming.

10am: Buy a "mining right", which gives you the right to stake a claim on a part of the south branch of the Tokomairiro River at Glenore, where the celebrations will be held.
Stalls open.
Treasure hunt starts.

Where and when
The Glenore river flat will be the scene of tomorrow's gathering. Located about 10km from Milton on State Highway 8, near the Manuka Gorge, the site will be signposted on the day.