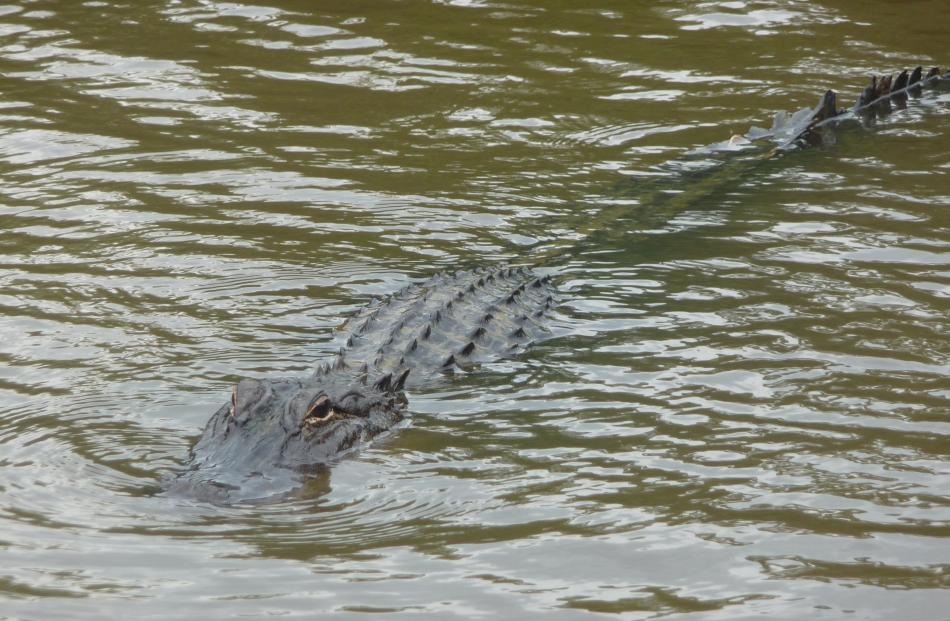 An alligator slides through the murky waters of the Honey Island Swamp. Photos: Pam Jones. 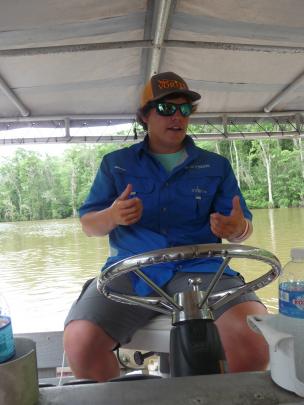 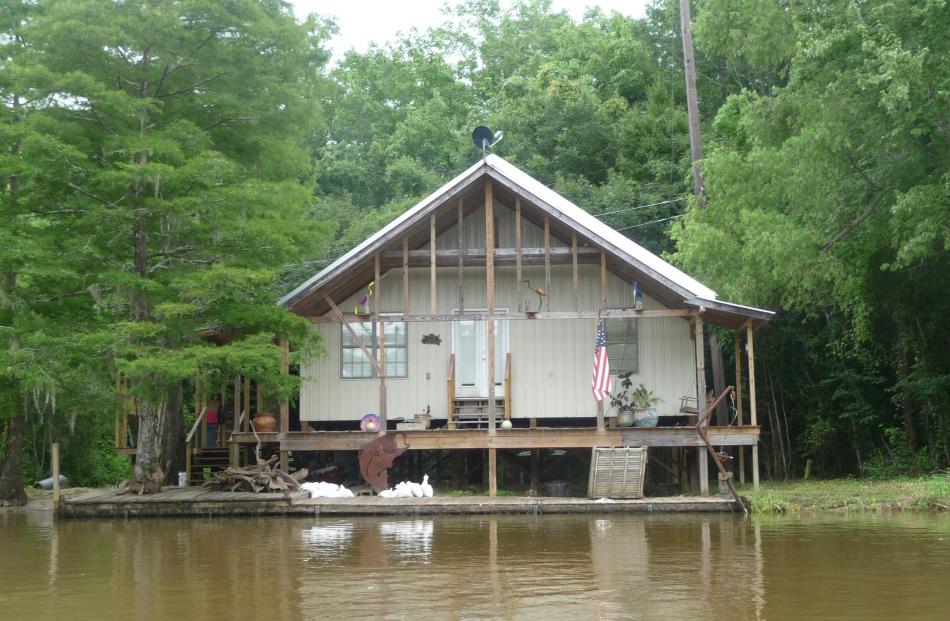 Everything is built "high and cheap and portable". 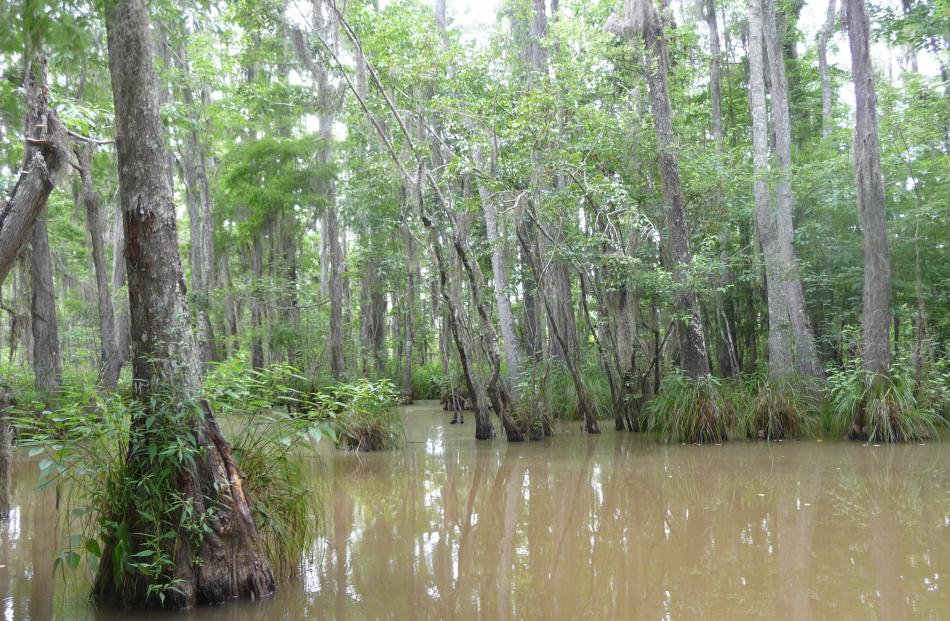 Pam Jones puts herself in the hands of a bayou pro as she heads upriver among snakes and ’gators.

As much comedian as captain, our swamp-tour guide cuts to the chase as soon as we head upriver.

"If a snake falls in the boat just throw it away from me. I don’t like snakes."

This is Captain Ty, a smooth-faced, sunnies-clad skipper whose southern drawl draws warm grins from passengers and leaves us tickled pink, despite the snake jokes.

Captain Ty looks strong and knowledgeable, and I’m sure could wrestle a ’gator if one hopped into our boat (or throw out a snake, if that happened too).

But his cherubic face makes him look kinda sweet too; he’s cute, and would be just the ticket for taking to your ma’s house for dinner.

His vernacular is charming as he steers us through the Honey Island Swamp in Louisiana, and his stories are even better, illustrated by real-life prehistoric specimens.

The thing is y’all, he explains, as a 2m alligator glides towards our boat, ’gators aren’t to be feared, as long as you respect them.

"Just like anything else they get a bad rap for human stupidity.

"I know a bunch of people who’ve just been stupid and put their hand in a ’gator’s mouth but I’ve never known anyone been bitten," he continues, as he pauses to inspect the muddy bayou water and says we’ve got more chance of getting bitten by a shark.

Excellent! This is no doubt of particular interest to the woman at the back of the boat by the bag of marshmallows.

Turns out ’gators like to eat turtle eggs, and marshmallows look like turtle eggs ... can we see where this is heading?

Captain Ty whips out a metre-long stick and stabs it into a marshmallow to entice the ’gator to come right to the boat, calling him gently, as one would a puppy.

The ’gator is barely half a metre from the boat when it jumps up to snatch the marshmallow and dozens of iPhones record the encounter. We’re breathless, even more so when we learn the "little ones are feisty"; just like pups, they like to jump and bite more than the bigger ones. Don’t put your hands outside the rails, he reminds, the cheeky ones could jump into the boat. We hope again he is joking.

But back to the snakes.

We see half a dozen ’gators in the swamp and they are all fed sweet treats, and we learn about the personalities of several, who are known by sight and named by swamp guides.

One is called Scarface, almost 4m long — so maybe 50 years old — and a good fighter.

"Anyone who gets to be that old is a good fighter ... it takes a smart ’gator to get that big."

Another male is called Lola.

"He’s real mean. He sits and doesn’t want to play with us. I think it’s cos we called him Lola."

But the 1.2m adult rat snake on a cypress tree gets an especially big round of oohs and aahs.

"Want to play a game and see how close you can get?" asks a passing guide, part of the same Cajun Encounters Tour Co team as Captain Ty.

Everyone leans back, as the jokes keep coming.

"This is where the walking part of the tour begins," Ty grins, as we pull up at a boggy, swampy patch of mud where pigs have been rooting.

A 90kg pig would eat a ’gator, he says. The pigs are everywhere, and there is a year-long season on hunting them. All passengers decline to get out and wade in the mud.

Locals go fishing and birdwatching in the Honey Island Swamp (about 40km from New Orleans), most  of them owning a boat and  keen on crawfish and blue crab. It’s also frog season all year round, except for April and May. Frog tastes like chicken, y’all, says Ty. Spice it, he says.

We see herons and hear cicadas, and coast past houseboats and houses on stilts, weekend getaway hangouts for fishermen.

Everything is built "high and cheap and portable", particularly since Hurricane Katrina swept through 11 years ago. After Hurricane Katrina the river that feeds the Honey Island Swamp rose several metres and flowed backwards for seven days, Ty says.

We see two Forrest Gump-style boats, one with a massive caged propeller at the back, the other with big long shrimping arms that would sweep out each side.Shrimping is "about the hardest job you can do", says Ty, with long, hot, still days at the beck and call of buyers and consumers and "no air conditioning: you can’t speed the boat up and get the air racing past your face".

We pass by gum and bald cypress trees and see wild rice growing out of the cypress’ gnarly, knotted roots, and see a landmark tree that’s become a Louisiana legend: the forked tree was struck by lightning and is now an easy-to-find meeting place for locals to imbibe some moonshine.

The water is less than a metre deep, but to finish Ty takes us for a spin to flatter marshland, where the river is wider and the water deeper but the ’gators still freshwater. It’s estimated there are between 1.2 and 1.5 million alligators in Louisiana, from where most alligator meat consumed in the United States comes (a limited hunting season operates each year).

Over the centuries many have explored or hidden out here — as well as well-meaning fishermen and tourists it’s said the swamp has provided refuge for many a pirate or robber — and locals are proud of the area; it’s a government-protected wildlife area.

Most of the ’gators get to 40-50 years old, some get to 100.But despite their  toothy, menacing grins, the swamp is still a friendly place. Birds flew among trees as we looked upwards, fishermen waved as we passed by.

Y’all come back now, you hear?