The tale of a stoat 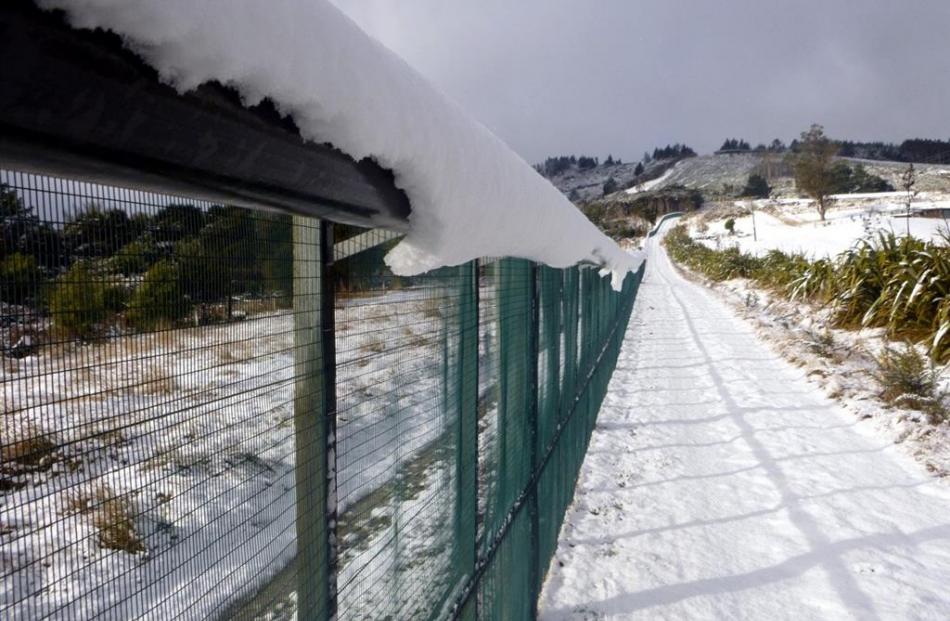 Snow build-up on the fence hood may have compromised the integrity of the fence to allow stoats in sometime during last winter. Photos: Elton Smith 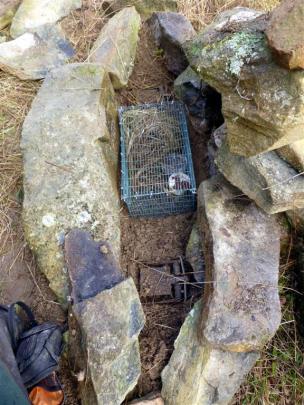 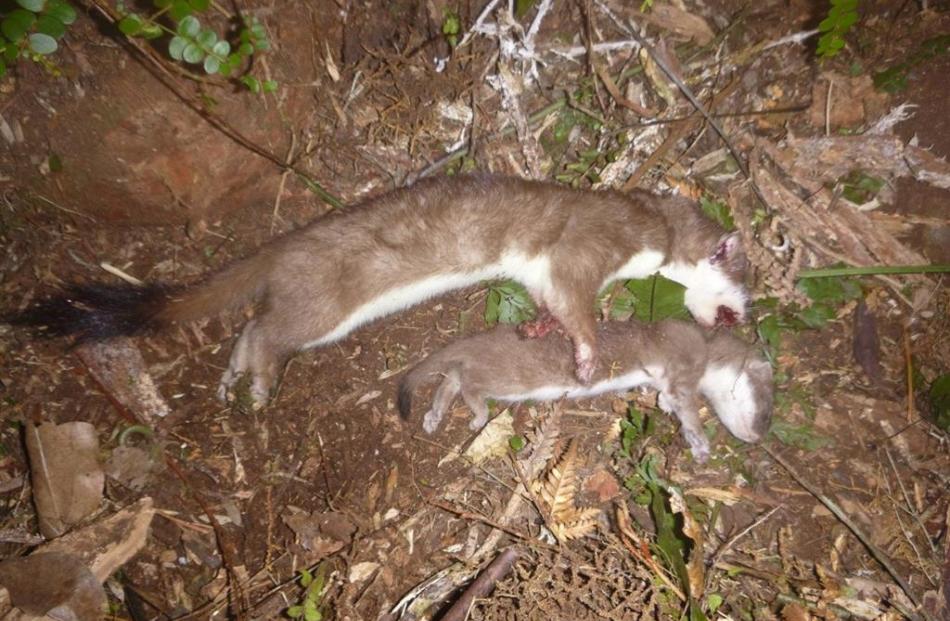 The end game: the dead female stoat with one of her dependent kits. 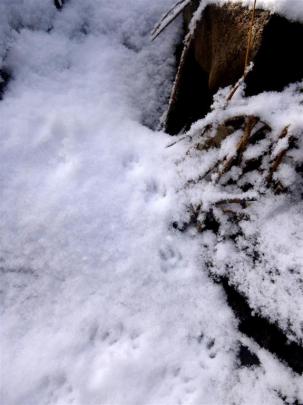 Every wildlife manager’s worst enemy, an untrappable stoat. Here a stoat has walked up to a trap set but did not enter, even with two live mice beckoning. 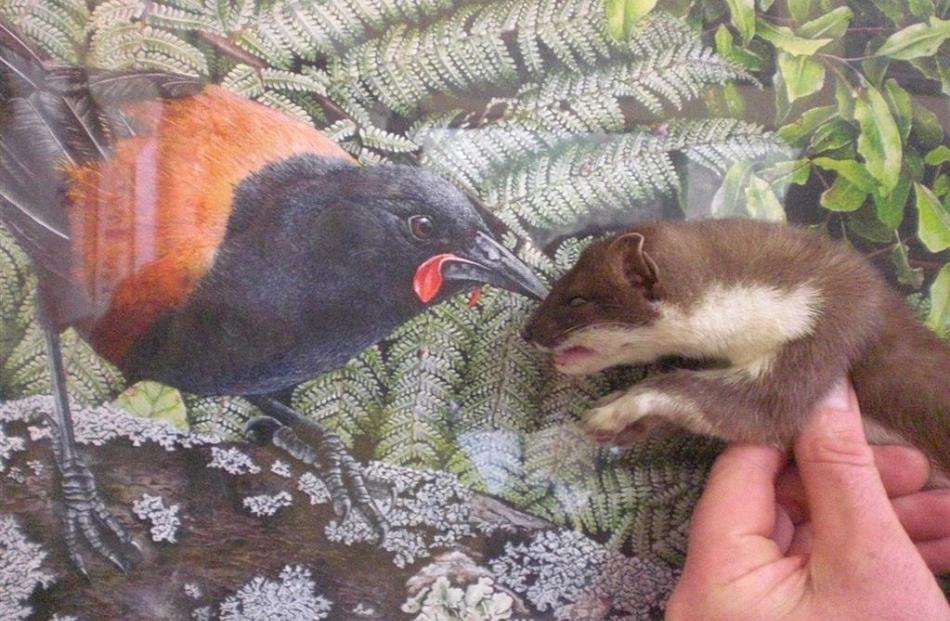 Not very good bedmates. Stoats may like saddleback but not the other way around.

Orokonui conservation manager Elton Smith tells the story of the 2015 battle against stoats at the ecosanctuary.

They're small, intelligent, agile and natural-born killers. And they're out of place in an ecosanctuary.

Stoats were introduced to New Zealand in 1885 and have since colonised the country, with the exception of several small pockets of specially protected land such as Orokonui Ecosanctuary.

Since the completion of the predator-resistant fence in 2007, Orokonui has had only two incidents when stoats have been detected inside the fence: in 2010 and in 2015.

The 2010 incursion resulted in two trapped males; they got in and were killed quickly with very little apparent impact. The 2015 incursion, however, was more serious.

In January last year, two stoat siblings were caught inside the fence, probably exploiting the same breach to get in. Intense monitoring seemed to suggest they were alone, but stoat footprints were discovered in June. Some of the tracks even ran past traps.

The worst-case scenario for any conservation project had just been found within Orokonui, an untrappable stoat.

After many experts were consulted, various traps were deployed and stoat-detection dogs employed, with one even getting within metres of a fleeing stoat. But flee it did.

By August it was apparent that our resident stoat was not going to be trapped. It was time for another tactic: poison. Over a two-week period, 19 poisoned mince balls were taken, but by what?

Stoats? We couldn't know for sure. Trapping continued, but in September stoat prints were still being observed in snow. If we did manage to poison a stoat in August, it was clearly not alone.

The end came with the arrival of holidaying Doc worker Angela Newport and her dog Macca.

The day of Prince Charles' visit in November coincided with the confirmation that we still had a stoat. After covering much of the sanctuary, Macca centred in on one very large totara, one of the very few in the valley.

Was Tane trying to tell us something?

While we were inspecting the tree, out popped a stoat and in the blink of an eye, away it went. Not even time to let off a shotgun round (which we had in hand). Disaster, we thought! We'll never see that again.

Upon further inspection, my hand in a hole met some stern opposition in the form of little growls: stoat babies! We now had a stoat den in the middle of a nature reserve. Yet this gave us hope: surely the stoat leaving the den was the mum and mums don't abandon their young easily.

We blocked up three entrances and the main two were lined with kill traps. Even if mum did manage to evade the traps getting in, the likelihood of successfully leaving carrying out a kit was low.

We backed off and waited for a couple of hours. It was a tense wait; the fate of the sanctuary lay with those traps. What if she and the kits managed to escape via an unknown entrance?

Shotgun held ready, I went back to the den. There was the mother stoat trapped along with one of her kits. In the 10 months that she may have been in the sanctuary, the only mistake she made was trying to save her babies.

It is hard to resent such an animal. While out of place and disastrous for our sanctuary, one can't help feel a certain amount of admiration for such an incredible form of life: a dedicated mother and an admirable enemy to confront.

The den was destroyed and sealed up. We didn't know at the time, but this was the final chapter for this particular incursion.

Subsequent trapping and a four-day dog hunt last month revealed nothing further. The invasion was over, but at a high cost. Saddleback, the most sensitive of bird species to mammal predation, is now thought to be all but extinct within the reserve.

Dogs, traps and the poison operation cost around $10,000. Staff and volunteer time would be many times that.

This 10-month battle was probably the most intensive effort ever carried out in pursuit of stoats anywhere in New Zealand. It will go down in the history of stoat invasions right up there with the Maud Island and Kapiti Island incursions.

• Elton Smith has been the conservation manager at Orokonui Ecosanctuary for the past 10 years. The 2015 stoat invasion took up about 60% of his time and aged him by about five years.