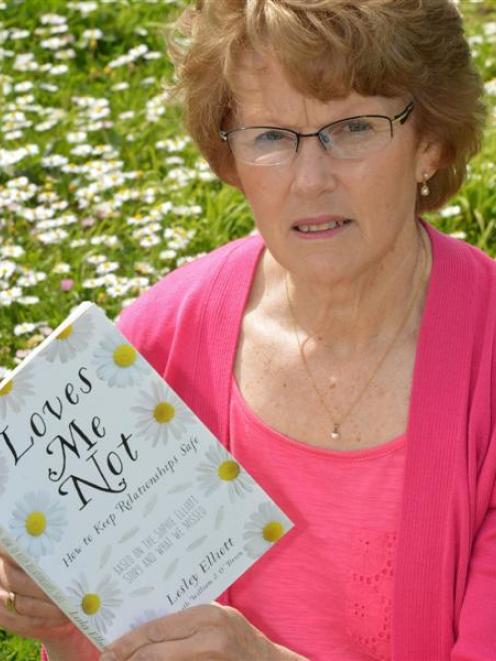 Lesley Elliott says it upsets her to think that girls are in unhealthy relationships. Photo by Stephen Jaquiery.
After her daughter, Sophie, was murdered by a former boyfriend, Lesley Elliott made it her mission to help others avoid abusive relationships.

Nearly seven years on, she is seeing her efforts come to fruition, with a programme in schools and a new book based on the warning signs that she and Sophie missed. Kim Dungey reports.

Lesley Elliott waits as the screen in the high school auditorium displays the next question: What would you do if you were being abused?

The girls read the first suggestion - dump him - then laugh, as they always do.

But Elliott is serious.

Too many women in this country tolerate controlling and abusive relationships, she says.

Her daughter was one of them.

Sophie Elliott (22) was stabbed to death in her own bedroom by her former boyfriend and university tutor, Clayton Weatherston.

The brutal murder shocked the nation and made the 68-year-old mother determined to warn other young people about the dangers of relationships that go wrong.

Elliott realised that if she and Sophie had missed the warning signs, then so too could many others, and decided that the best way to address the issue was through education.

The Loves Me Not programme she helped develop is presented by police to year 12 pupils and complemented by a new book Loves Me Not: How to Keep Relationships Safe that includes advice on how to identify problems and how to deal with them.

In the months after Sophie's death, Elliott learned that youth dating relationships have a higher level of emotional and physical violence than any other age group, that police are called to domestic violence every seven minutes on average and that only 18% of such incidents are reported.

Since then, about 80 New Zealand women have died at the hands of a partner or ex-partner.

Elliott is convinced that had Sophie been through something like the Loves Me Not programme, she would still be alive today.

White ribbon attached to her top, she talks candidly about the days leading up to January 9, 2008, when she rushed up the stairs at her Ravensbourne home to find Weatherston straddled over her daughter, stabbing her repeatedly.

In front of her, a photo of ''Soph'' - blue jeans, white top, radiant smile - sits on the dining table.

Upstairs, her daughter's tidy bedroom remains much the same as it always was, with Marilyn Monroe on the door, Marian Keyes on the bookshelf and hand-drawn caricatures on the wall.

''Sophie's friends are getting married and having babies,'' she says, ''and it's hard because you think about where she would be at this point.''

In Loves Me Not, Elliott describes how abusers use mind games and controlling behaviours to dominate their victims, often calling them names, trying to isolate them from friends and family, displaying a lack of empathy and threatening to hurt themselves if their partners won't do what they want.

Some incessantly text their partners to find out where they are, who they are with and what they are wearing.

From her conversations with victims, Elliott believes that too many accept this as their lot in life, or put up with it in the hope it will get better.

Her message is: it won't.

''If you think you are unsafe, then you probably are.

''One of the things I say to younger girls when I talk to them is don't put up with it. So many of them do and Soph did. She made excuses all the time - 'It wasn't that bad'. 'It was my fault'. 'If I was a better person ...' From women I've talked to, that seems to be quite common.''

In Sophie's case, the psychological abuse started almost immediately but it was only after the five-month relationship ended that it became physical.

Elliott recalls how one day Weatherston would tell her daughter she was beautiful; the next, he would call her fat, ugly, stupid and a slut, an insidious cycle of behaviour that sent her self-esteem into free fall.

Then, in the days before her death, there were two separate assaults when he put an arm across her throat (Elliott later learned that strangling is common in physically abusive relationships) and pushed her on the stairs at the University of Otago.

Mother and daughter agreed not to go to the police because Sophie was moving to Wellington and thought she would never see Weatherston again. But Elliott now says that every instance of assault should be reported.

After Sophie's death, it emerged that Weatherston had a track record of treating girlfriends badly but none of them had reported it.

It also became clear that several people heard the commotion at the university and no-one thought to ask what was going on.

On this bystander effect, she says: ''If you can't intervene or you feel unsafe, at least tell someone.''

Leaving a relationship is a potentially dangerous time, she adds, and anyone worried about an angry response should seek advice beforehand.

The book also addresses modern forms of communication, suggesting that young people being bullied online should turn off their phone, take a ''Facebook holiday'' and if they need an ''out'', say their parents have blocked access.

It's a world where people say things that they would never say face to face, where compromising photos are ''out there'' forever and where people who post details about themselves and invite others to comment are devastated when the feedback is hateful.

Recently, a man told her of his 17-year-old daughter committing suicide after her boyfriend broke up with her by text message.

Loves Me Not is aimed at boys and girls because men are also subjected to unhealthy and dysfunctional relationships.

''We just don't talk about them,'' clinical psychologist Nigel Latta writes in the book.

''Instead, we talk about guys solely as the bad guys. Violence is only ever stuff that we do, not what gets done to us. Well, it does get done to us. And it's not okay.''

Elliott says both sexes have welcomed the one-day workshop, which identifies the differences between equal and controlling relationships.

Girls often tell her they have had sex education ''up to here'' but don't know how to get on with boys.

Although it is not known exactly how many schools have taken up the workshop, every police district in New Zealand has either begun delivering it or has schools signed up for early next year.

The programme has also attracted the interest of two police forces in England.

Until it is fully up and running, Elliott will continue to tell her story to senior pupils and community groups up and down the country.

A part-time nurse in Dunedin Hospital's neonatal intensive care unit, a former union rep and a keen gardener, she has also become a reluctant spokeswoman in the media and a dogged campaigner.

Her gruelling schedule sees her give up to three presentations a day.

Each time, audience members approach her afterwards to share stories of abuse, bringing home to her that while there are ''plenty of good guys around'', there is ''still a culture of male dominance'' and abuse crosses all socio-economic boundaries.

''I'm surprised by the number of quite well-dressed, well-to-do women who come up and say, 'I was abused for 20 or 30 years in my first marriage'.''

Usually, she does not go into details of Sophie's murder but recently when speaking to some ''tough young kids'' at a youth justice residence in Christchurch, she described how Weatherston stabbed her daughter 216 times and ''cut bits off afterwards''.

Shock reverberated around the room.

''If it affected one of those guys and he changes his behaviour, it's worth it.

''People say, 'I don't know how you can keep doing this'. To be quite honest, I'm on remote,'' she says, explaining the presentation includes a clip of her daughter doing a karaoke version of a Queen song at one of the many farewells held before her planned move to a Treasury job in Wellington.

Sophie, the life of the party, is relaxed and smiling as she sings what now seem poignant lyrics.

''I hear it and I see it but I'm not registering because if I looked at her too much or really thought about it, I wouldn't be able to do it.''

Other people wonder how she can remain in the house where Sophie died ''but I don't think about that. I think about her as she lived here ...''

Seven years on from the murder, she finds it difficult to concentrate, is less tolerant of people's petty squabbles and has a ''meltdown'' most days.

She still feels guilty that she didn't recognise the signs of abuse and that she let Weatherston in on the day of the murder.

But the education programme and a foundation in Sophie's name have distracted her from thinking too much about what happened: ''If I wasn't doing this, I think I would have curled up and died by now.''

Gil Elliott, manager of the medical laboratory at Dunstan Hospital, has instead focused on changes in the justice system.

The 72-year-old was in a Ministry of Justice group that looked at the idea of a victims commissioner.

He has also supported the Sensible Sentencing Trust but is frustrated at the length of time it takes for things to be actioned.

Weatherston, who was sentenced to a minimum of 18 years in prison, is ''faceless, a non-person'' as far as Lesley Elliott is concerned.

She hopes he is getting a ''tough time'' but prefers to devote her energies to changing New Zealand attitudes about relationship violence.

''We know we've saved lives already because women have told us.''

Loves Me Not: How to Keep Relationships Safe (written with retired policeman Bill O'Brien, Random House, $24.99), is on general sale and through the sponsorship of Zonta, is offered free to all pupils attending the the Loves Me Not workshops.

For more information, go to www.sophieelliottfoundation.co.nz.