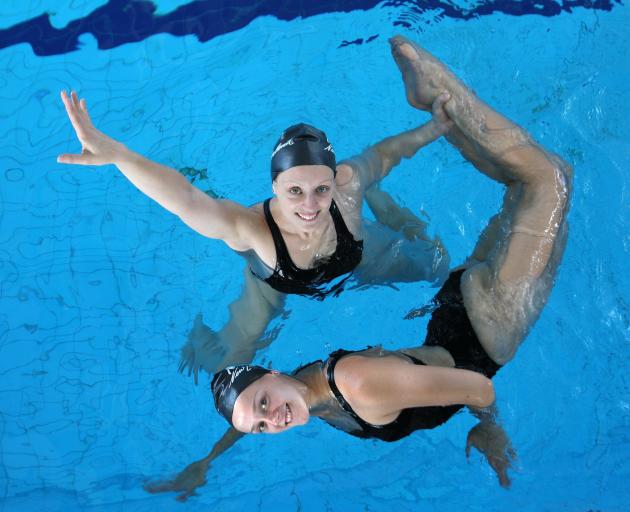 It has been 10 years since the Daniels sisters hung up their togs.

That is not some worn-out cliche either - they literally hung up their swimsuits so the Otago Daily Times could capture the moment with a delightful photograph.

The so-called clothes line was actually some old rope which we strung up between two trees in the backyard of the family home.

Nina was 26 and Lisa 23 when they retired in 2008. The pair had spent 15 years perfecting their routines.

They had to put up with ugly pegs on their noses and holding their breath while performing acrobatics under water. Those early morning training sessions at Moana Pool were not always a hoot either.

But the rewards were great. They got to go to the Beijing Olympics and they had won a bronze medal at the 2006 Melbourne Commonwealth Games two years earlier.

It was a wonderful time in their lives.

"I guess it is all the people that we met along the way that I remember," Nina said.

"That is the one thing I miss the most — all the friends that you make."

"At the time, the lifestyle felt difficult," Lisa chipped in.

"You trained hard for five to eight hours and then you had free time to absolutely chill. But now every day is hard," she said, laughing, glancing towards her baby daughter.

The sisters had different partners to begin with and did not join forces until 2000. Once they did, they were incredibly successful. They won eight consecutive national titles and also collected three consecutive Oceania titles.

The Commonwealth Games medal was hugely rewarding but getting to the Olympics was a tremendous highlight as well.Nina celebrated news of their selection with a "wee dance" while Lisa just jumped around. The pair were completely out of sync for once. The  sisters had hoped to finish in the top 16 but placed 23rd out of 24 competitors.

Lisa and Nina Daniels hang up their togs in October 2008. Photo: Jane Dawber

"When we thought about training more seriously we never imagined we would go that far," Nina said.

"We were just so lucky with the opportunities and the support that we had as well, especially from our parents."

"It wasn’t just our parents either," Lisa said.

"It was people throughout New Zealand and Canada. They would do so much for us."

Just qualifying for the Olympics was a huge achievement. The pair moved to Canada for three and a-half years to get better coaching and to help turn their Olympic dream into a reality.

Their parents, Ita and Ted,  were a source of huge financial support but the community chipped in as well.

Some local businesses donated products which were auctioned online under their user-name "synchro chicks".

"There were just so many people who contributed to help us succeed."

When the big day rolled around they were both a bundle of nerves but also wanted to embrace every moment.

"But I remember thinking this has to be about the competition," Nina said.

"You can’t let yourself be overwhelmed because it is the Olympics. But it was an amazing experience."

"You knew, even though you tried to block it out, that millions of people were watching on TV," Lisa added.

"It is really hard to block that out, but you have to."

The sisters performed their technical routine to Ukrainian Dance music and for the free routine they selected a version of Paint It Black. The pair had followed in the footsteps of sisters Katie and Lynette Sadleir, who represented New Zealand in the sport at the Los Angeles Olympics in 1984, and became role models.

The Daniels sisters retired shortly after the Olympics. They had been water babies, so it was a big change.

Their mother introduced them to swimming at a young age. Nina took her first plunge when she was just 5 months old, while Lisa had her first dip at Moana Pool as a 7-month-old.To soften the blow of retirement, the siblings took up coaching.

They felt they had a lot more to give the sport. They hoped to  encourage a new generation and to pass on the knowledge they accumulated while competing at the top level.

The sisters are right where you might expect to find them. They live five minutes from each other and close to the beach.Nina lives in Ocean View and Lisa is at Brighton. They both have a view of the same ocean, so the water is still a big part of their lives.

But it is the next generation who are working on their underwater moves these days.

Nina (36) and her partner Aaron Hollands have 2-year-old son Quinn. He took his first dip just before he turned 6 months old.

Lisa (33) is married to Brad Coory. The couple have a 4-month-old daughter. Mieka will get her introduction to the pool early this year. Their children are water babies like their mums.

Nina works part-time for an architectural firm in Dunedin. She studied interior design after retiring.

Most of her work revolves around making models so the designs can been seen in miniature.

"It is really cool," she said.

Her swimming is limited to taking her son to the pool these days.

"He absolutely loves it. It is so hard to get him out of the pool."

Nina embraced mountain biking for a period but life got in the way.

"At the moment life is so busy that there is not that much time to do anything like that.

"But I kind of miss that feeling of being really fit."

The sisters took up coaching when they retired and "pretty much took over the club", Lisa said.

Nina stayed involved at Aquagold for about six years and has not ruled out a return to coaching in the future.

Lisa, who is on maternity leave at the moment, works at the University of Otago. She studied to be a dietitian and decided to continue in research after graduating with a PhD.

She is a researcher in the department of human nutrition.

"When we were doing a bit more we were contracted to coach the national squad for 13 to 15-year-olds," Lisa said.

"In the early stages there was not much of a plan for them. Nina gave it up when she was pregnant with Quinn and I pretty much took over the role of looking after [the athletes in] the South Island and continued to coach them."

Lisa took the New Zealand team to the Singapore nationals last year and they secured a podium finish.

She was also a selector but midway through this year took a back seat to concentrate on raising her family.

The sisters said they feel fortunate to be living so close to each other and going through similar life experiences at the same time.

They have had the odd squabble over the years but "nothing that stands out", Nina said.

"We’re very lucky to be so close and we just have such a good relationship and we wouldn’t want it any other way," Lisa said.