'We have a lot of great things here’ 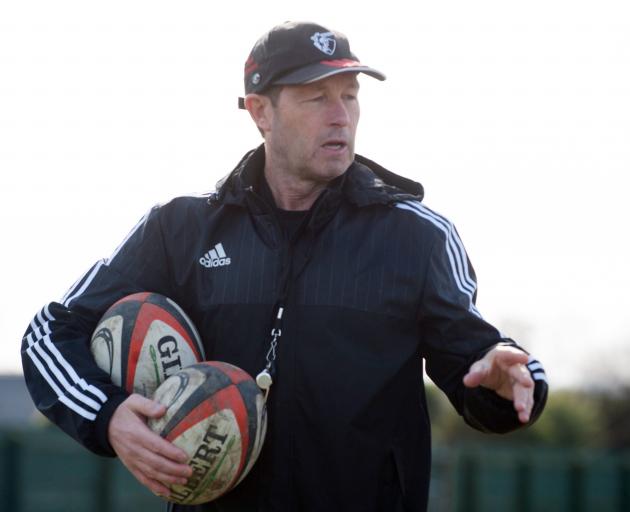 Former Otago first five-eighth John Haggart in one of his many coaching roles. Photo: Supplied
John Haggart played 119 games for Otago, finishing with the blue and golds when the side won the national provincial championship in 1991. Since then he has been all around the world with the oval ball game. Rugby writer Steve Hepburn catches up with Haggart.

John Haggart hates to say it, and it has become a tired cliche in rugby thanks to a former Waikato No 8, but he has been on quite a journey since he hung up the boots.

Otago, Canterbury, the Highlanders, Japan, France and now with the Black Ferns, Haggart has been around the traps since he stopped playing the game.

Haggart said none of it was planned and he had enjoyed every single part of it.

‘‘Rugby does take you on a bit of a journey. Such a wonderful game. You meet people, see some amazing places and do some amazing things. I have been fortunate to be able to do that,’’ he said.

‘‘Nine times out of 10 you are working with good people and that is what keeps you interested in the game and keeps you passionate.’’

Haggart said with all that travelling he still considered himself an Otago person.

‘‘My formative years are in Otago. I’m an Otago person through and through. That is where I spent most of my life. Even though you leave Otago, you never leave Otago. Friendships and people you know, you have them forever.’’

He said those years playing in Otago — he went to school in Timaru and came south to study physical education — was the base for his coaching career. 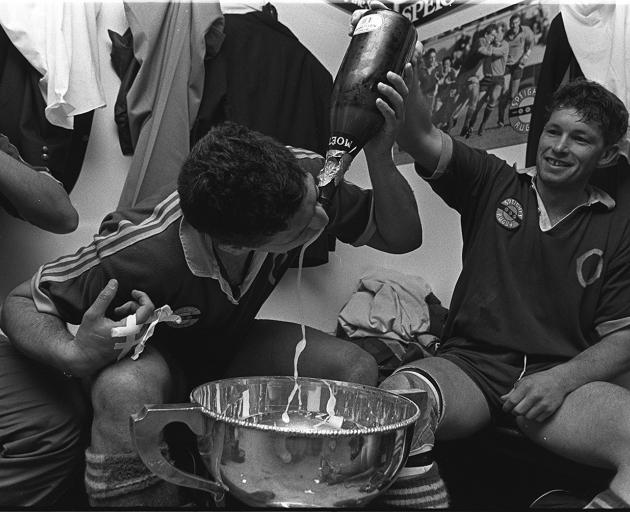 Paul Cooke (left) and John Haggart celebrate Otago’s 1991 NPC win. Photo: ODT files
‘‘I played in the amateur area. Played under Laurie Mains. He was a hard taskmaster as we all know. He had some strengths but there were also other parts that I thought — that would not be part of what I do. But the camaraderie and the people you played with and the extended wider rugby community in Otago were good people to know. They were influential in shaping me further.

‘‘I certainly believe in being a values-based type of coach. Being a good bugger, working hard and being up front are important characteristics of being a good coach.

‘‘As you get older, hopefully that gives you more wisdom. Certainly things I have done as a coach in my younger days that I would not do now. Most people have reasonable technical knowledge. But it is all that invisible stuff — building relationships, getting on with people, working as a team. Without a team you have nothing.’’

Haggart helped coach Otago to the national provincial final in 2005 with Wayne Graham but was not picked to be the Otago coach the following year when Steve Martin got the job.

That led him to move north to Christchurch where he got involved in various roles with the Canterbury union.

Haggart said the move to Canterbury helped him.

‘‘It was a difficult time for me but you move on and I think you learn a whole lot of new things out of the situation. I had been with Otago for a long time. Coming up to Canterbury was fresh.’’

But was it hard coaching Canterbury after all the years with Otago?

‘‘It was and wasn’t. My heart was with Otago. If you go into professional coaching then you’ve got to have your eyes wide open. I have come to realise that. Decisions will be made that you won’t agree with but you have to appreciate — it is like decisions on players — people are going to make decisions based on what they think is right at the time.

‘‘You have to deal with that and learn to deal with that. Looking back that is what I have done. I’m coaching Canterbury against Otago. My heart is with Otago but my head has got to be where my job is. That is to be with Canterbury.’’

Haggart said there was no single reason Canterbury was the most successful province in the country.

‘‘There is no one thing that Canterbury does differently than others. There is a network of people that come back to the environment once they have played and give back, which is an advantage.

‘‘Legacy is an advantage. You don’t come here to coach the team and expect to be third, expect to be second. You are expected to be first. And with that comes pressures but that is about striving for excellence.’’

Haggart coached in Japan for the Sanix club, including coaching future Highlanders coach Jamie Joseph — ‘‘you coached with Jamie as a player rather than coaching Jamie.’’

Haggart also visited countries such as Sri Lanka and Portugal in his role as academy coach with Canterbury. He also spent the 2017-18 season with Stade Francais in Paris.

‘‘To coach in France was one of the highlights of my life but it came with some challenges around culture, language, communication and expectation. We had a relatively average team, knocked around by injury. When Greg [Cooper] came home it was really quite different and we never really grew ... at the end of your day, you just look at what you can do. And if you do your best and your best doesn’t get the right outcome then you can’t do any more.’’

Haggart said it was a tough coaching job — a long season and working every day.

He was glad he did it but loved being back in New Zealand.

‘‘You’ve got to go away to realise how good New Zealand is. We are a small country but we have a lot of great things here — natural resources and rugby people. We share all our ideas. Look at the top down — Steve Hansen, Ian Foster, Scott McLeod, they’re all happy to share their knowledge and experiences. Goes right down from Super Rugby to provincial and club ... you miss that when you are away.

‘‘Players grow up with a growth mindset — want to be better, work hard and want to be a pro rugby player. Those are the sort of things that do not exist in other parts of the world.’’

Haggart is seeking to continue that success with the Black Ferns, where he is an assistant coach. But he will never forget his Otago roots.

‘‘I’ve got a real soft spot for Dunedin. Coming into that road in Dunedin feels like home. But you can’t live in two places at once. Christchurch has had its challenges in recent years but is still a pretty special place.

‘‘I remember Carisbrook, it was a big bog there at times — mud and wet. People used to say what are we doing here. And that was for decades. It was a horrible place to go. But they did it up and then they have Forsyth Barr Stadium which is great. But Christchurch needs a covered stadium as well.’’