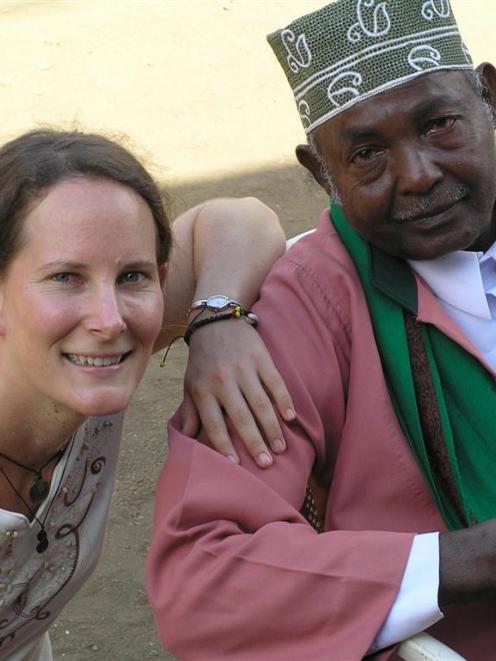 Dani meets a local.
Former Dunedin student Dani Blake writes about her year working for an environmental NGO on islands off the east coast of Africa.

The Islamic Republic of the Comoros Islands is one of the world's poorest countries.

It has four presidents for its three islands and 1000 mosques.

Situated off the Mozambique coast and to the northwest of Madagascar, it is famous for its 25 coups in 20 years, the prehistoric coelocanth fish and the giant bats, with their 2m wingspans.

So what is there for a 22-year-old fresh out of the University of Otago?

Well, you get to live at the foot of the world's biggest active volcano, in a land of black volcanic rocks, coconut palms and mango trees, where the sound of the mosque rings out five times a day.

You will never eat so many bananas in your life - boiled, grilled, fried, stewed, squashed or smothered in throat-burning chilli.

Every day is a bet as to whether the electricity and water will be turned on.

As the country has not renewed its contract with its fuel supplier, you may live through a six-month fuel crisis which means no electricity for weeks at a time, meaning no businesses or even government offices can open, no cars on the roads - which means a lot of walking - and no fuel for cooking.

Or perhaps it's just that the Comoros, with a population of less than one million, has become the most eco-friendly state, having given up fossil fuels . . .

You may manage eco-volunteer projects, make an environmental TV series, organise school camps about the environment, teach in local schools and see that these schools don't even have toilets, have no books and no pictures on the walls.

You may spend weeks walking in knee-deep mud to look at seagrass, avoiding the millions of urchins scattered like mines waiting to burrow into your feet, seeing amazing creatures that you can't believe exist in these colours.

Or going around lost villages to interview fishermen about sharks. Or visiting an island that has recently been through a war to get rid of a dictator.

You will be the local entertainment - little kids running out from their houses to look at this strange white thing, some of them screaming in terror and others yelling "bonjour mzungu!" till you are 4km down the road.

You may live through a war between the country's three islands - a war whose preparations keep the country at a standstill for months, but which only lasts three days and is fought using two bright orange helicopters sent from the Ukraine, and has you hiding in your house on hearing the sound of gunshots wafting over from riots outside the French Embassy.

If you end up on the island of Moheli, you will squash yourself into taxi vans with 30 other people - children hanging from the ceiling, bananas and coconuts rolling around the floor, winding your way through hills of banana trees, vanilla and kassava plantations.

In the village of Hoani, you will alternate your time between lying on beaches in the dark counting eggs coming out of turtles' bums while also having stand-offs with turtle-poachers, meetings with the local partner association by candlelight, in rooms with a million mosquitoes all trying their hardest to give you malaria.

You will experience the complexity of Comorian culture; here, the first question you are asked is whether you are married.

The culture is based around the Grand Marriage, which has people spending 30 years of their lives in France to save €40,000, which will be spent on three days of ceremonies.

But it is only once you have done the Grand Marriage that you have the right to speak in public meetings, so if you want to be anyone in society, you have no choice.

Families are thrown into severe debt by these marriage ceremonies, so they force their children to marry someone suitable and rich.

Which is why it is quite often that men decide to marry a tree rather than some girl their family chooses for them.

Beware - the women pin jasmine in your hair, not to make you look pretty, but to try to marry you off to their sons.

You will experience amazing hospitality from people who have little, invitations to dinner from strangers on the street, and being adopted by people whose language you can't even speak.

And that's just a quarter of it.