Up hill and down dale 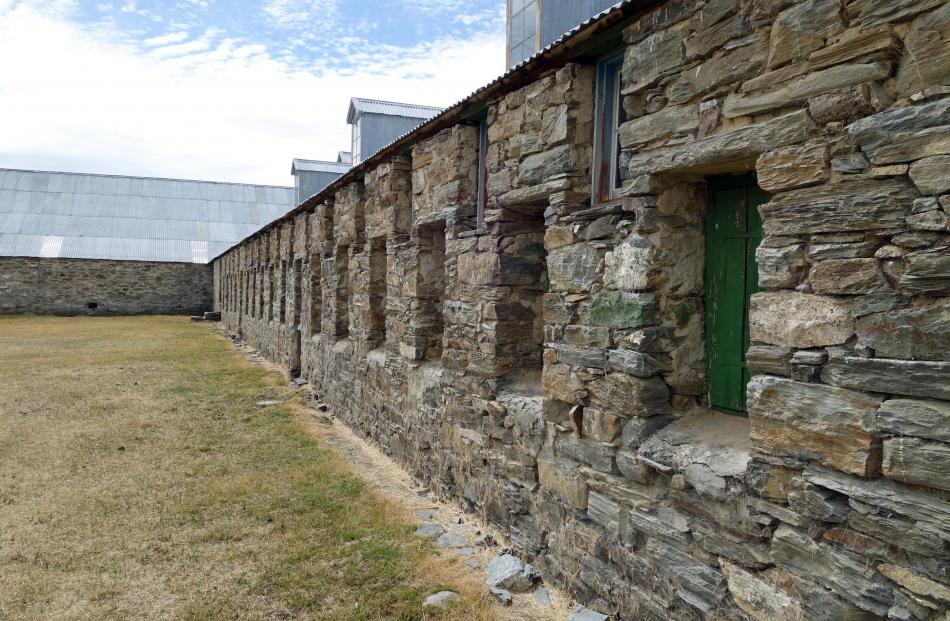 The huge, historic Morven Hills woolshed, home for the night for some of our party. 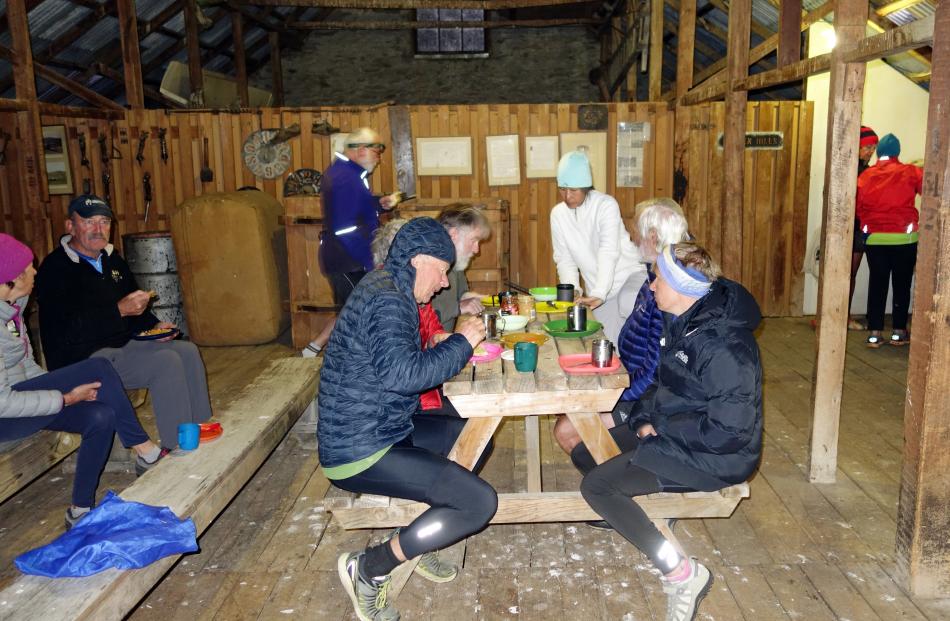 There are no heatpumps in the Morven Hills woolshed, so jackets were essential at breakfast on day 3. 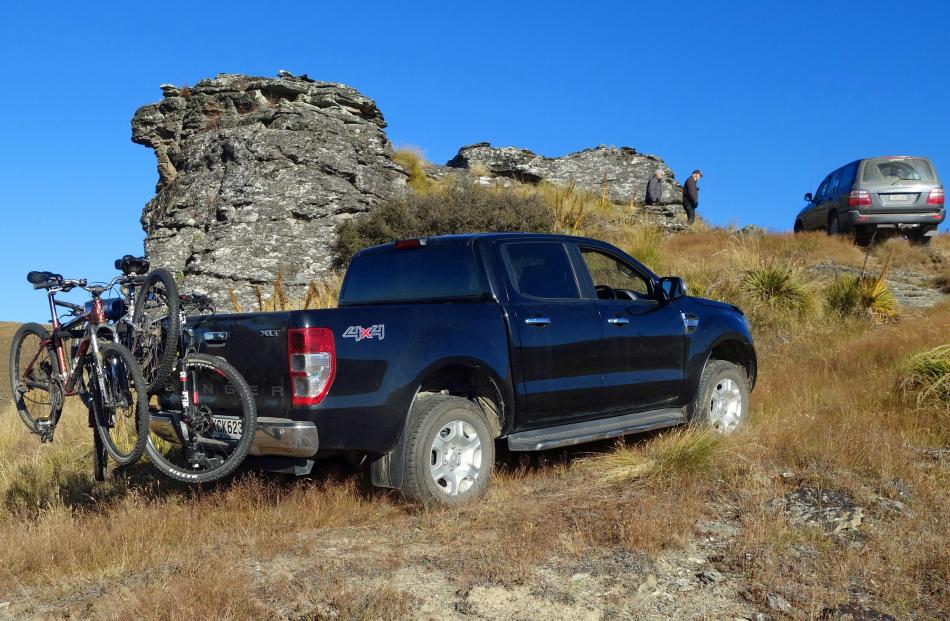 The 4WD support vehicles find the going challenging as they head up Grandview Track, heading for Hawea Flat. 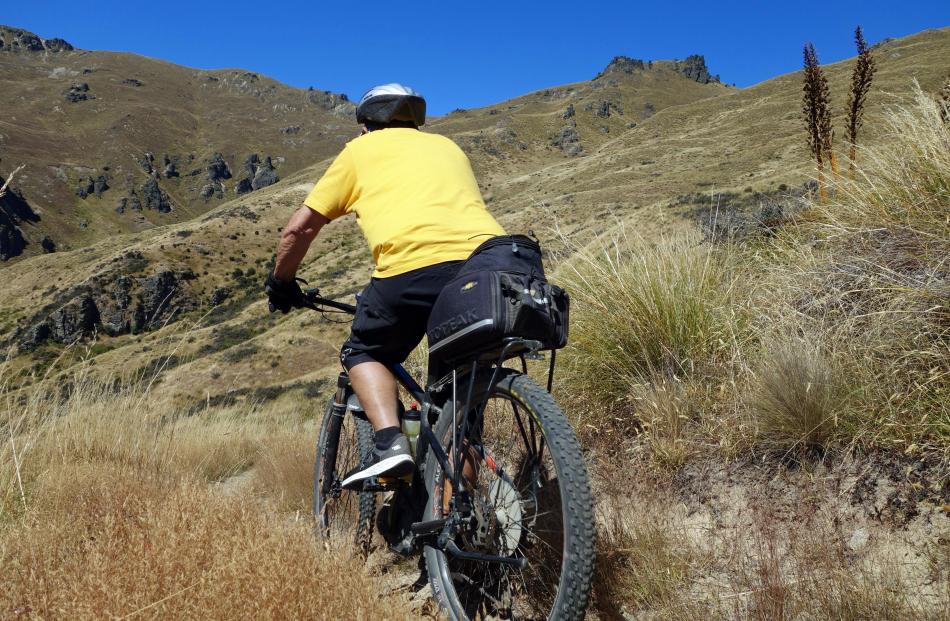 Norm Sinclair, of Dunedin, starts the huge descent of the Grandview Doc track.

Recently retired and with time on his hands, John Fridd decided to hop on his bike and have a crack at the Cavalcade Push Bike Trail. Apparently, there’s a hint in the name . . .

I should have twigged.

As I studied the entry forms for the two 2019 cavalcade bike rides, I noticed the easier option was called ''The Push Bike Trail''.

When I was a kid, ''pushbike'' was the affectionate name given to the heavy, single-speed bikes we rode all over Duntroon.

A bike rider threads through lunching horse-riders on the Grandview Doc track high above our destination, Hawea Flat. Photos: John Fridd
But during three days in the mountains, I discovered something about the Cavalcade Push Bike Trail. The ironic name was a hint from trail boss Tim Hawkins that we could expect to be pushing our bikes for extended periods as we encountered steep hill after steep hill.

I also learned the course was laid out that way to give us, the riders, the best possible views of the Lindis Pass and Lake Hawea District's scenic highlights, so the bitter pill was sweetened somewhat.

So I entered the four-day event and got my gear together. In the early '90s I had trekked from Outram to Lawrence on the very first Cavalcade walking trail, so I thought it seemed apt I was taking part in just the second biking trail.

When our 36-strong band of cyclists assembled on the Hawea Domain the day before the ''off'' I could see the average age was quite high - maybe the youngsters had twigged to the ''pushbike'' tag and decided to stick with their Lime scooters. The field included 10 members of the AOK Wanderers senior biking group I run in Dunedin, including US visitor Rick Burdyshaw.

I tented on the domain the night before our ride started and didn't exactly enjoy a relaxing kip, as a strong nor'wester tried to shred my tent, which proved strong and flexible to the point where I was thrown out of my camp bed at least twice as the windward wall of the tent bent in my direction. The result was only about two hours' sleep. 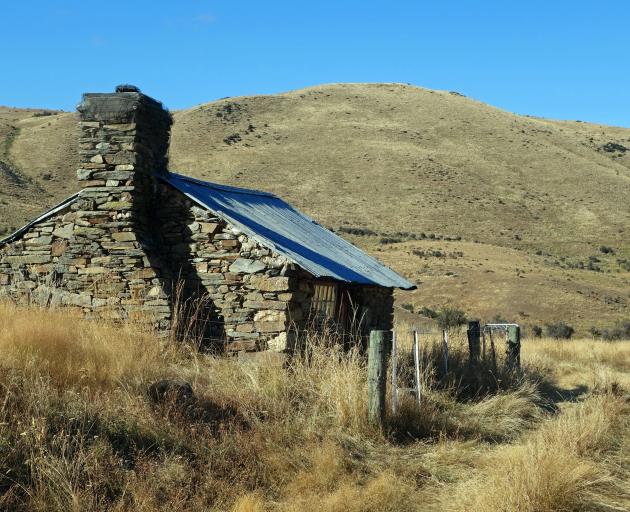 Polson’s Hut on Shirlmar Station was once the scene of deep sadness, as twin boys born here during winter in 1869 both died almost immediately because of the cold. The bike ride passed by this hut.
Then, in the morning, our ride didn't start well. Rain was bucketing down as we waited for the bus to take us from Hawea Flat to Lindis Pass, where biking was to start. We retreated to the shelter of the huge cavalcade marquee and event boss Terry Davis killed some time by releasing, into the tent, some tiny piglets being raised on the family farm.

The bus arrived, the rain stopped and we set off to Merivale Station to start of our adventure. Initially, the riding was easy, as the trail wound along beside a mountain stream. We munched on lunch beside a musterers' hut and took in the mountain vistas - this was what we came for.

The afternoon ride was a delight as we rose to the challenge of navigating our way through the back country. There were no markers out to show us the route - we had to scour trail maps downloaded earlier from the internet. However, one hill in particular was not so delightful, as it seemed to climb forever as we arrived on Shirlmar Station.

Shirlmar was our first overnight stop and the plan was to doss down in the woolshed. However, one of our AOK Wanderers team quietly inquired if the shearers' quarters might be available. He got the nod and some of our team moved in - it was much better to lay out the sleeping bag on a comfy foam mattress. 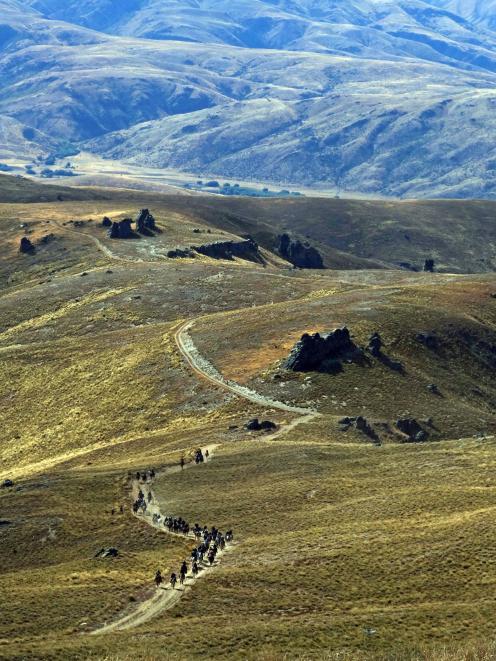 One of the horse trails also came up Grandview track on day 3 and our riders soaked up the compliments the riders flung out — ‘‘How do you bike up these bloody hills?’’
The cavalcade brochure had promised ''fantastic food'', but I'm still waiting for that - when I lined up near the back of the queue there was no sign of the promised roast meat and I had to be content with a few veges. After the main course, a few cheese and bikkies were put out but no pudding - surely we deserved our just desserts after the big ride?

However, top marks to the catering crew for having ice-cold beer and RTDs ready for us on arrival each afternoon and the big pizzas they made and distributed after our big Grandview day went down well.

My mood lifted when Tim ran a bumper general knowledge quiz after dinner and our extensively travelled AOK team managed to take the win.

When we retired to our bunkrooms, we discovered there was no hot water in the cottage, as the system was playing up. This didn't faze one of my room-mates, a Strath Taieri farmer, who leapt out of bed naked on a freezing cold morning and had a cold shower.

The next morning I was in a bad mood from the start. After breakfast, I picked up my bike from the sheep pens - and I had a flat back tyre! That made four for the last six rides. Arghh!

Some friends pitched in to help get my bike mobile again and away we went up the valley, with some spectacular scenery promised on our trip north to the fabled Morven Station, which originally covered 162,000ha and ran 140,000 sheep.

Push Bike Trail riders enjoy lunch at a Merivale Station hut on day 1.
Unfortunately, I didn't get to see the best of the promised scenery. I'd taken a leg strain into the cavalcade and had been hoping it was going to behave. On the first big climb of the day, as I pushed my bike a mountain trail, my leg stiffened up and I ground to a halt. Trail boss Tim caught up with me and I explained I was going to turn around and cruise down to the Lindis Pass and take the easy way up to Morven Hills.

So within half an hour I was playing in the SH8 traffic, which wasn't much fun. I rode 10km up the pass to Morven Hills and got my first glimpse of the huge historic woolshed, which used to boast 34 shearing stands. The fastest cavalcade riders started arriving about an hour later raving about the tracks they had ridden.

Once most of the riders had arrived, station owner Richard Snow entertained the visitors by showing us how he musters stock by helicopter. He explained he kept no dogs, but relied on his Robinson R22. While we were there he used it for at least three jobs.

At Morven Hills, our accommodation expert was on the case again and snaffled some rooms in the shearers' quarters for our team so we didn't have to stretch out on the hard wooden floors of the historic woolshed. We had a great night's sleep but when we leapt out of bed we found it was very cold. Porridge would have been great, but we had to be content with a continental breakfast. 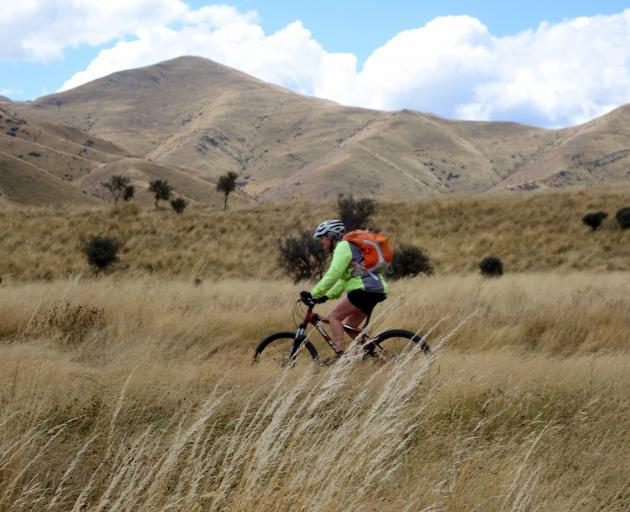 Liz Crook, of Dunedin, enjoys a back-country downhill cruise.
Trail boss Tim had made no bones about the route for our third day - even the former British Royal Marine admitted ''humour will be required'' on this challenge. It meant a sustained climb over several hours from Forest Range Station to Grandview Mountain, a vertical ascent of almost 1000m, tough in anyone's book. Riders who had been struggling - myself included - took up the offer of a seat in a 4WD up the first part of the climb.

The 4WDs dropped us on a plateau about 700m above sea level and most of us took to our bikes, although three women preferred to walk to Hawea. Even with our head start we still had a fair climb and we pedalled on and on and had the odd walk, taking in the incredible scenery one seldom gets to see. I spotted some horses and was soon commenting at how fast the big animals can move uphill.

When they passed us I was marvelling at how difficult it must be to take a horse down a steep mountain track when a rider yelled out ''How the hell do you ride up these hills?''. That made me feel better.

On our trail about a dozen people rode e-bikes and on the trail to Grandview Peak the high-tech machines certainly came into their own. Even though there were some excellent riders on our trail, the first three to pass me were all on e-bikes - and all from our AOK team. Go team! It wasn't a race, of course, but it was nice to snaffle bragging rights.

Suddenly I spotted some blue between two dun-coloured hills - it was Lake Hawea! We'd done it! Well, not quite. We had to turn left and ride downhill for a while to get to Grandview Mountain and then it was a fair hike to get to the top of the mountain, reputed to afford one of the world's best views. Not for me - the views from just down the hill were sensational enough.

I headed off to find the Doc track down to the plain and encountered horses again. Trail riders were enjoying lunch with scenery and our riders threaded their way through the equine scrum to have a look at the trail, which seemed to be the aspect of the route which most troubled Tim, who rides an unsprung bike.

Yes, it did look challenging but surely our full-suspension bikes would eat it up? Well, in most cases but two of our team's riders came to grief on the narrow, steep trail, one flying off his bike and whacking his head on a tree and the other going over the edge of the track and cracking a rib.

They both finished, however, and before too long our whole tired team was sipping a cold beer in the Hawea Domain and chatting about our big adventure.

While there we caught up with some of the riders on the other MTB trail, the Carrick Town Cranksters. They were looking tired and strung-out. If we thought our trail was tough, it had nothing on theirs - they rode twice as far as we did over five days and also tackled some huge climbs and tricky descents.

Unfortunately, I and some of our team couldn't make the Cavalcade Hoedown, which traditionally brings all the horse, walking and biking trails together for a fun night. The band booked for the hoedown looked great, but I guess it's hard to compete with one of the world's great rock bands, the Eagles, who were rocking the stadium in Dunedin that night.