Something of a "legendary tramp" is how Lonely Planet describes the Northwest Circuit of Stewart Island.

It’s the "deep and pervasive mud" that makes the 10-day walk quite some challenge.

Add swarming sandflies, endless gullies to scramble through and the ingredients are there for a certain masochistic pleasure.

Because we expected the worst, the gluggy, sticky and sometimes smelly stuff was mostly OK. No major slip up or slip downs.

Not so for some, as this comment in the Big Hellfire Hut book of a near face-plant attests: “Fell forward in mud. Hands out to brace. Elbow deep and six inches from impact."

We completed the circuit, at least most of it. We sensibly sliced portions off each end thanks to water taxis — themselves a way to open fresh vistas and wildlife viewing options.

Sometimes we had the huts to ourselves, a pleasure for relaxing and pottering, because as a fit party (although 60-plus) we arrived early or mid-afternoon, albeit exhausted.

But company is also good, and at Long Harry Hut six women turned up. They had come in by helicopter from Bluff to the previous hut and were doing particularly scenic — and not too muddy — sections before flying back. They were celebrating a 40th birthday sans small children. 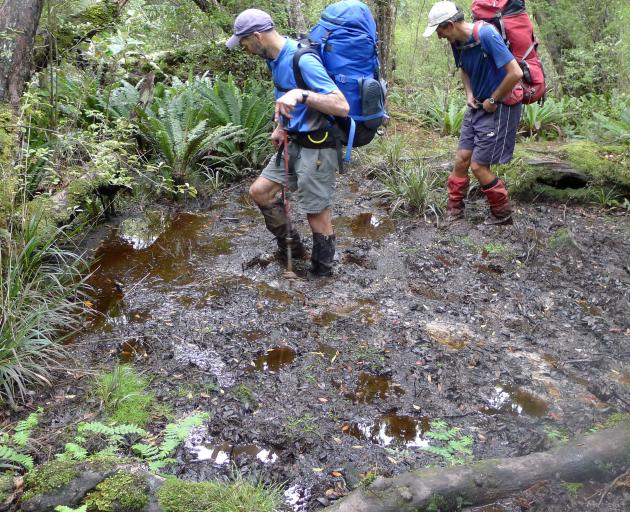 Geoff Plunket (left) and Jeff Cleugh (right) in one of the mud holes.
At one stage, they burst into a tune from The Sound of Music.

My attempt at a minor adaptation amused a little. So here goes an extended version.

"When the fly bites

When the mud sticks

And islands that sparkle

Birds a tweeting out on their wings

These are a few of my favourite things."

How can you feel sad about the satisfying sense of achievement and from the satiating of a sharpened appetite at the end of a hard day?

How can you not be exhilarated by towering rimu, shades of many green, those deserted beaches, the Ruggedy Mountains, those dotted islands, including kakapo refuge Codfish Island/Whenua Hou? 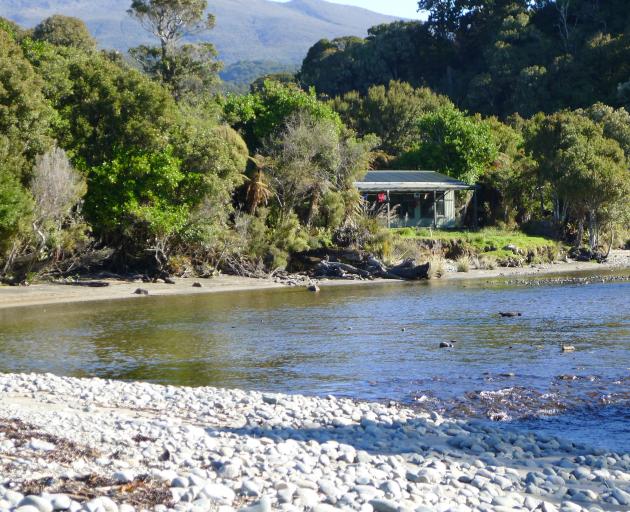 Alas, though, no kiwi. It is estimated about a third of the 1200 or so a year on the circuit stumble on kiwi on the track or near huts. A third might also spot one at Mason Bay.

One German (about half the trampers are from overseas) saw a kiwi three days in a row. That hardly seemed fair.

One couple reported that coming across two kiwi about 3pm on a long day lifted their spirits.

At one hut we coincided with a volunteer hut-cleaning crew of two retired couples, including one from Dunedin, accompanied by a Department of Conservation employee.

The huts are a treasure. Each is sited differently and each has its charms. They’re basic and comfortable.

If you have the energy, and the weather co-operates, we’d highly recommend two nights at Christmas Village Hut so you can spend a day to climb Mt Anglem (Hananui), the island’s high point at 960m. The extent of the view makes it clear why this landmass is New Zealand’s third island. 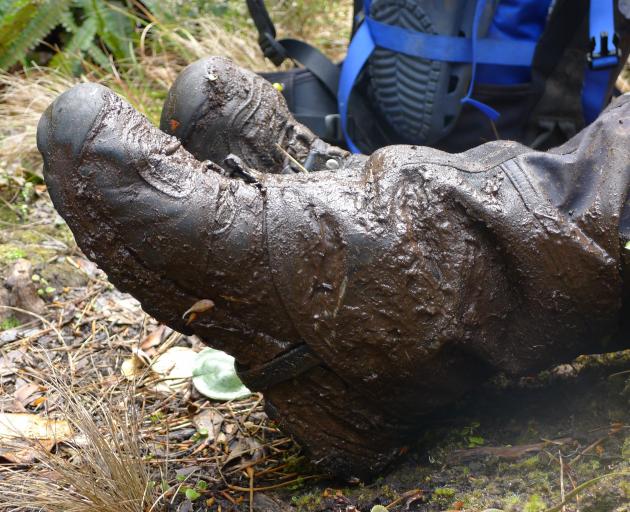 Jeff's boots at a break for lunch.
Doc in Oban warns prospective trampers of the pitfalls, and displays photos of mud holes. It, and the Lonely Planet guide, have all the basic information you need to plan.

A warning, however, on estimated times. Such is the terrain that many — as again evidenced in the hut books — go hours over. Make appropriate allowances.

By the way, keep a lookout for a couple of lookouts. They are well worth the short detours.

And, if you have time, the hill near Mason Bay Hut provides a superb 360-degree panorama. Cloud prevented us from watching the sun drop into the ocean. Earlier, we had watched the sun emerge from the sea at Christmas Village Hut.

Obviously, this track is for the reasonably experienced and for the properly equipped. Do not be like one Englishman we met. He was on his own, had no locator beacon, was not writing intentions in the hut books and was overburdened with too much weight.

He surprised us in the end, though, taking advice and showing phenomenal grit.

Pack what you absolutely need for safety’s sake, and food for 10 to 13 days (a rest day wouldn’t hurt).

At least, the track is well marked with frequent orange triangles, and it’s hard to lose. But if you are in doubt just follow the mud.

•Lots of high-energy and dehydrated food: 125.5km for the full circuit is a long way.

•A slice of stoicism: It’s tough.

•A helping of humour: for when you or your mates topple into the mud.

•Walking poles: to help to try to prevent the above.

•Gaiters: how else will you keep the sticky stuff out of your boots?

•A beady eye for bush, birds, beaches and boundless beauty.