By Rebecca Fox
0 Comments
Kiwis are often terrible at exploring everything New Zealand has to offer, but the Covid-19 outbreak provides another reason to try holidaying at home. Rebecca Fox plays tourist in her own backyard.

Peering out the window of a Cessna Caravan aeroplane, it feels like you could just about reach out and touch the snow-capped mountains below.

The Air Milford plane was taking 11 of us on a flight from Queenstown to Milford Sound. Some of us were tucked into the back seat, marvelling at the seemingly never-ending peaks of the mountains as Glenorchy and Skippers Canyon faded away.

One of the first things we noticed was that the snow was a dirty brown colour, rather than white. That was courtesy of the Australian bushfires, the pilot told us. The Australian couple on board apologised. Not necessary, we said.

The flight was one of four going to Milford that morning, it was the only way to get in at that time after the floods had damaged the road. Bus trips started up the day after we went and are now returning to a more normal schedule.

We were supposed to have bused into Milford before flying back to Queenstown, but that simply was not an option.

For us — the tourists on board were mostly Americans, with one South American couple and the Australian pair — the extra flight was no hardship.

It took us right out to sea before travelling up Milford Sound to the aerodrome. We enjoyed a perfect bird’s-eye view of the pristine sound.

A quick bus trip from the aerodrome took us to the terminal and wharf where the boats were waiting. There was just a small crowd compared with the usual thousands that come in on buses in the peak season. 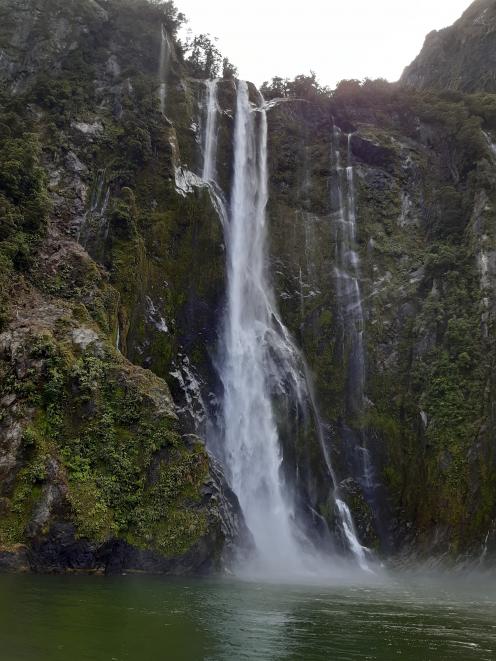 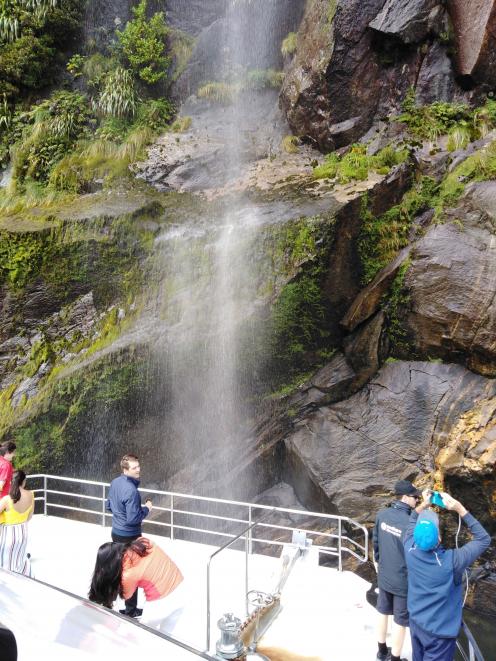 Getting up close and personal with one of Milford Sound’s many waterfalls. PHOTOS: REBECCA FOX
We boarded the Southern Discoveries Nature Cruise for our journey across the water to the sound’s entrance and back again.\

It was a beautiful sunny day and, due to the recent heavy rain, the waterfalls were gushing down the sides of the sound.

The skipper took the boat as close as he could to the base of two waterfalls so people could experience the spray. (A word of advice: a waterproof jacket and a spare set of trousers are necessary if you plan to partake in the "glacial facial", or it could be a damp trip back.)

You could also see the scars from the big storm: gashes in the green slopes where the earth had given way, crashing into the sound leaving bare rock behind.

Staff gave a running commentary of what we were seeing and the boat slowed whenever wildlife showed its flippers. We got to see a group of young male seals sunning themselves on a rocky outcrop. 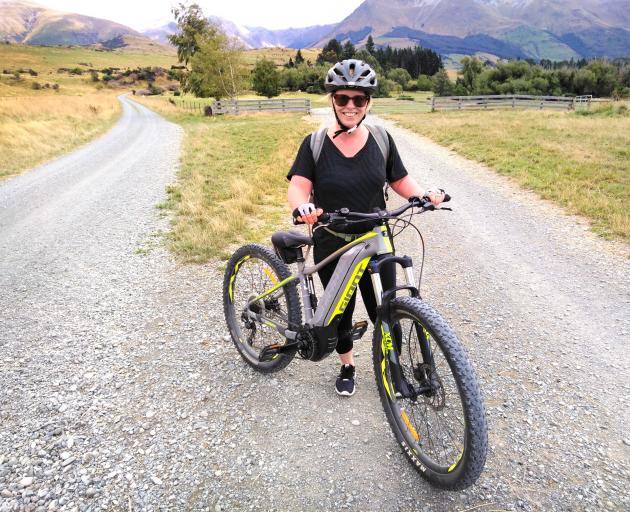 Rebecca Fox tries out an electric bike for the first time.

Watching our fellow passengers’ reactions, I could see why New Zealand has such a great reputation internationally.

We returned to the plane and headed back, this time taking a route through Fiordland National Park where we saw glacial lakes and the Sutherland Falls.

I had the privilege of a front-row seat, getting to watch pilot Alex Turnbull do his stuff.

Also interesting was the view of recent construction and development in the Frankton area as we flew over it, not to mention coming in to land at Queenstown airport.

It was a pretty special start to a few days’ break in Queenstown and made us ask why we had not done it before.

The next day, we crossed Lake Wakatipu in Southern Discoveries’ catamaran, heading for Mt Nicholas Station as we planned to do the cruise/cycle option from the station to Walter Peak.

It’s somewhere I had not been since I attended a Girl Guide camp as a tween, so I was looking forward to going back.

We picked up electric bikes in Queenstown and they were secured in the back. 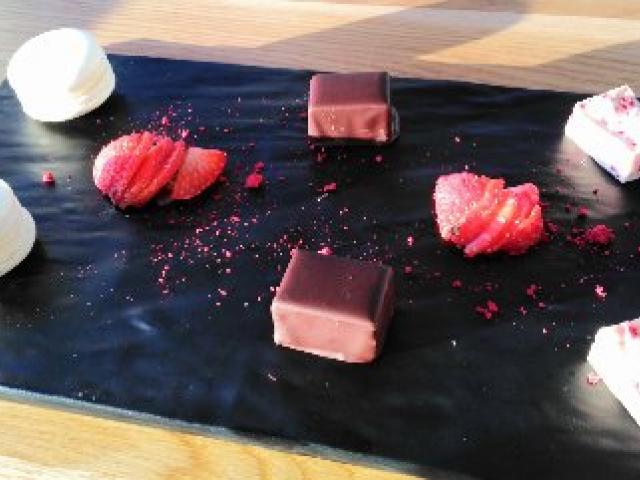 Dessert on board Southern Discoveries dinner cruise.
The 14km "easy/intermediate" ride goes along gravel farm roads between the two stations, providing great views of the lake and mountains from a different perspective than you get on the lake.

At Mt Nicholas, we were met by one of the station’s workers and her dogs and taken to the woolshed. There she took us through the history of the station, explained about merino wool and its connection with Icebreaker and then took us out to meet her pet calf and lamb.

She gave us a demonstration of how the dogs rounded up a flock of sheep, fascinating the city dwellers in the group.

In the back of the woolshed, a "Kiwi" lunch was provided — mini meat pies, salad, quiche and chocolate brownie. We chatted to the Americans beside us who were impressed with our country, our food and our politics.

Lunch was just the fuel we needed for our ride. The wind had got up, but thankfully it was a tail wind.

We quickly realised the benefits of electric bikes as we charged up the first hill in a matter of seconds. 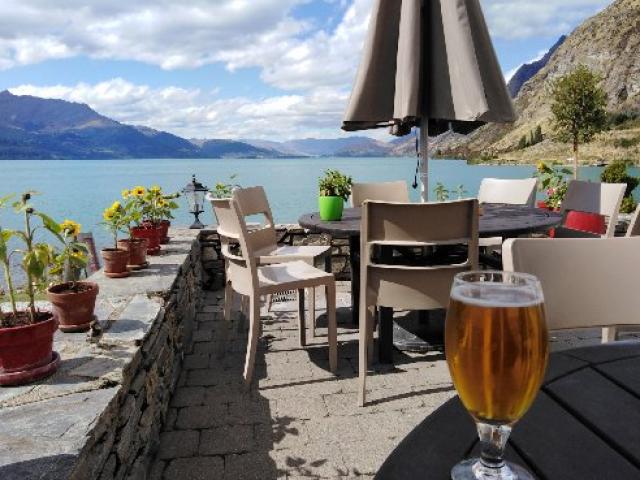 A cold beer after a ride from Mt Nicholas to Walter Peak. 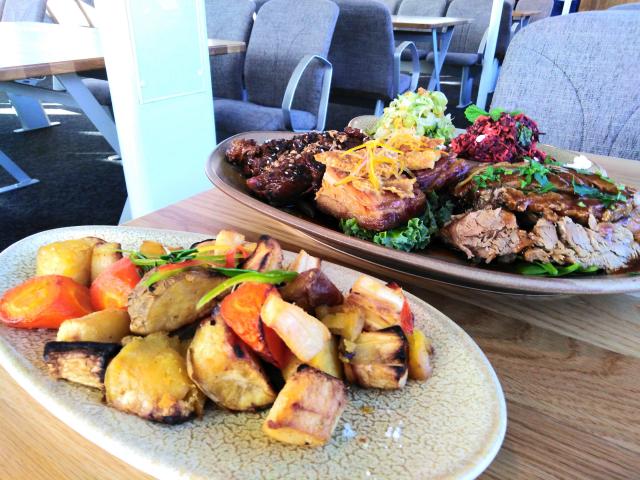 The main course on the dinner cruise on Lake Wakatipu.
It made the ride on a hot day so much more pleasant and, possibly, easier than it needed to be. The expansive views of the headwaters of the lake gave plenty of excuses to stop, take a break and an obligatory selfie.

There is a toilet mid-way if you need it, but no other facilities so we were glad we’d filled our water bottles and thrown a snack in.

The only other people we saw were farm workers and a German tourist who was cycling the length of the country to Bluff. 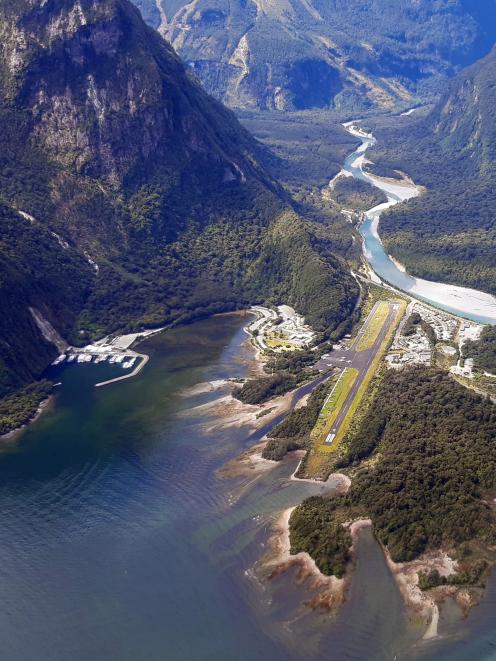 Milford Sound as seen from the air coming in to land.

With the bikes taking the edge off the few rises on the track, we were back at Walter Peak in plenty of time to catch our ride home, allowing for a wonderfully cooling beer to be consumed while waiting.

A relatively new offering in Queenstown is a dinner cruise on Lake Wakatipu featuring a "trust the chef" menu.

Boarding the catamaran again (there was one other Kiwi couple on board) we were shown to a window-view table and, as the boat headed out, offered a drink from a list featuring Central Otago wines and locally brewed craft beers.

When we got out on the lake, we were served an antipasto board to nibble on while we watched Queenstown disappear from view.

As it was such a beautiful evening no-one could resist popping outside to take photographs as we headed gently up the lake. 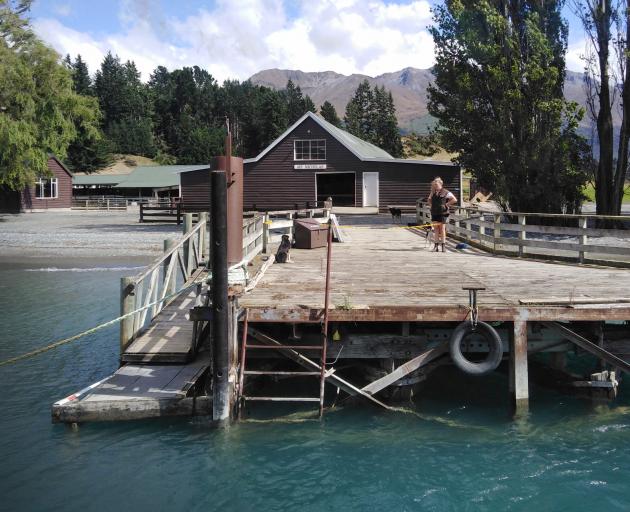 Arriving at Mt Nicholas Station for the farm tour and ride.

The arrival of our main course drew everyone inside as slow-cooked beef cheeks, pork belly and lamb (and there were vegan alternatives) were served platter style. The meat was accompanied by roast vegetables and a couple of fresh salads.

Given there was more than enough food for two, we were quite relieved to discover dessert was six beautifully arranged chocolates — just the thing to finish the meal.

By this time we had turned around and were heading back to Queenstown.

Given it was a lovely night and we still felt very full it was the perfect occasion for a stroll around the waterfront for a little window shopping and people watching.

The trip was a busy few days but lots of fun and reinforced our commitment to seeing more of our country.