Timbuktu: Stepping back in time 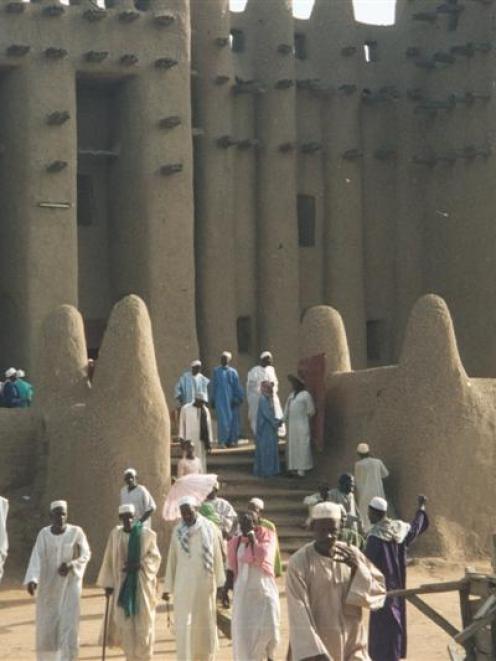 Worshippers (left) stream out of the grand mosque at Djenne. Photo by Alistair McMurran.
When it comes to collecting passport stamps, ODT sports writer Alistair McMurran is a master. Recently, Mali became the 171st country or territory he has visited. Here is the fourth and final part of his journey.

The Dogon people wanted the freedom to retain their traditional religion and did not want to be converted to Islam by the sword.

In the 11th century they migrated to an inaccessible place in the hills where they would be safe from invaders.

They lived in high caves built into sandstone cliffs that could only be reached by climbing difficult steps.

They still live in the same region of Mali today but in more accessible homes beneath the steep cliffs where their ancestors lived.

"The Dogon people shifted to the area to keep their traditional religion and not become Muslim," our guide Sory told us.

The visit to the Dogon people was the highlight of our visit to Mali. They have maintained the essentials of their way of life for more than 1000 years.

They live in difficult terrain and yet have survived the onslaughts of invading armies that found it too difficult to penetrate their fortress.

They were hidden from the world, forgotten and allowed to live their life and culture in peace.

The Dogon people are noted for their complex and elaborate culture, art forms, unique houses and granaries that often cling to the bare face of the sandstone cliffs.

The Dogon people form the bulk of the 15% of the population that still retain the traditional religion.

There are appropriate statues and symbols of the gods that are designed to keep the evil spirits away.

Each village has a spiritual chief. The one we met had a cat, hen and two baby chickens outside his house and they all lived in harmony.

Each village has its resident tortoise. At one village we saw a 15-year-old tortoise that was completely at ease with us.

The Dogon land consists of three key areas: the steep cliffs where they live, the plains where they farm and the plateau where they can view their entire domain.

During our visit we followed the ancient tracks that linked village with village and the plateau with the plains.

We climbed carefully laid stones that created staircases up gaps in the cliff face and used ladders that provided a route over chasms. We climbed up steep rock steps to visit a family that sold us a Coca-Cola drink.

The older daughters carry babies on their backs in a knapsack. One 4-year-old daughter carried a doll baby on her back. They get used to their roles early in life.

After feeding her baby, the mother moved down the slope and used a large pole to grind millet for dinner.

On the way back down to the plain we passed men and women carrying beans and millet on their heads from the cultivated fields below.

This typifies life in Mali, and Africa as a whole.

"Once a person can walk they work," Sory told us.

Our night in the Dogon country was spent sleeping on mattresses, covered by mosquito nets, on the roof of a building.

Our driver took us over a steep and tricky mountain road. At one stage he had to back downhill to get enough revs to get up the steep slope.

Mali is typical of Africa as a whole. People make use of any water to wash themselves and their utensils.

We passed a naked man who was covered in soap suds and washing himself in a little stream close to the road.

We visited a small village near the town of Songho where David Horne, of Dunedin, tested a traditional toilet and came back disgusted.

We were taken to a cliff top above the village to a spot where boys aged between 9 and 12 are circumcised every three years.

The boys spend a week in the shelter and when the wounds heal they are tested by having to throw a stone to touch the edge of the cliff.

"It is a time of great celebration in the village," Sory told us.

"The boys have a race to touch a star sign on the cliff and the winner gets the prettiest girl in the village."

The boys are then instructed about the choice of a career - farmer, hunter, masked dancer, and soothsayer.

The town of Djenne has a population of 22,383, is one of the premier sites in West Africa, and has World Heritage status.

Its mosque is the largest mud-brick structure in the world and is like a fairytale apparition when first seen.

We saw men coming out of the mosque after 3pm prayers dressed in brightly-coloured African dress of blue, red, pink and white.

In contrast, we saw women carrying firewood on their head for cooking, pounding millet for flour and making milk in a big bowl for their children and threading beads for a necklace.

Children took our hands as we walked around the streets and boys asked for our empty water bottles.

Other boys were diving into the river off a bridge.

Djenne is a medieval village and still has open drains running down its streets and rubbish is thrown out the windows.

The village was established in the 11th century and Djenne is one of West Africa's oldest towns.

Its heyday was in the 14th and 15th centuries when it profited from trans-Saharan trade and was a major seat of Islamic learning.

It has one of the biggest markets in Africa and we saw people coming from other villages and travelling across the river in crowded small boats.

On one boat I counted 37 people and there were 33 on another vessel.

The riverside city of Mopti has a population of almost 110,000 and is the Venice of Africa with its hundreds of small villages alongside the river.

We stayed at Maison Rouge Hotel that was built two years ago using local materials. It was built by Armady, a French architect who grew up in Senegal. It is an old-style building.

"I chose Mopti because I like the river," he said. "Each room in the hotel is unique."

He grew up in Senegal, was educated in France, and worked in Europe and Japan before returning to Africa. He is looking for someone to manage the hotel who understands western ways and needs.

He doesn't think the Mali people are up to it.

He was critical of the way foreign aid money is being used in Africa and did not think the newly-appointed European Commissioner understood what was going on because it was his first visit to Africa and he did not understand the Africans.

We had a boat trip of about six hours on the river and they cooked a meal on board for us.

We saw a fisherman asleep in his boat on the calm water.

At the city of Segou, we visited a fabric works and were instructed how to print on cloth using clay.