Travelling back in time 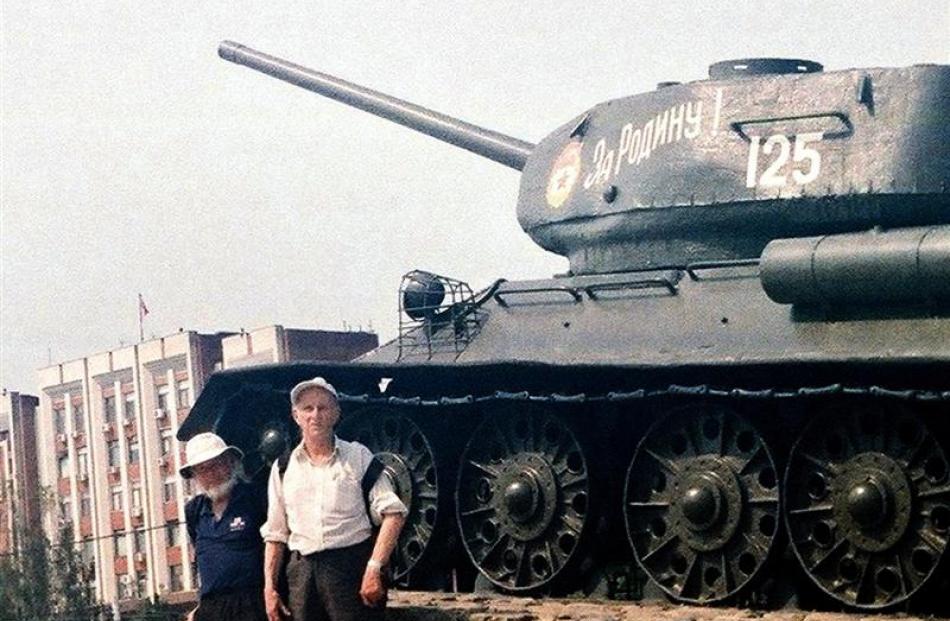 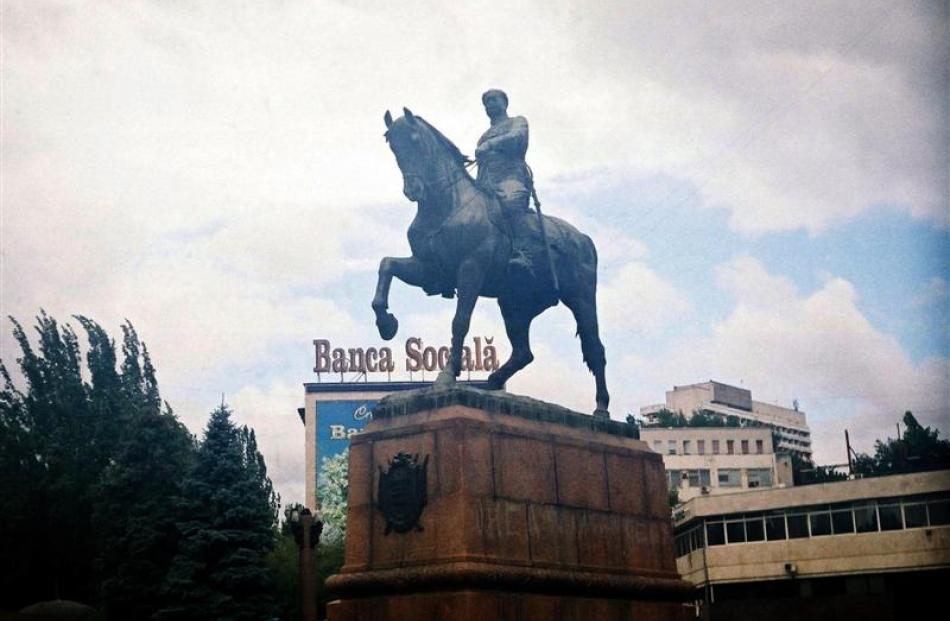 A statue of Russian general Alexander Suvorov on his horse. 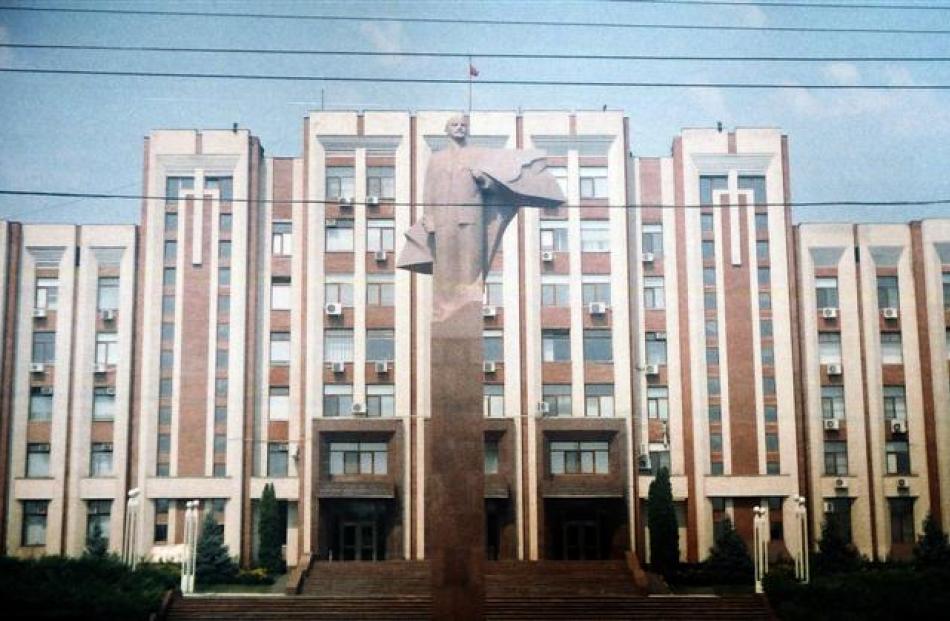 ODT sports writer Alistair McMurran visited Trans-Dniester this year and has now been to 195 countries and territories on the Los Angeles-based Travellers Century Club list. His travelling companion David Horne, who has been to more countries than any other New Zealander, has been to 258 of the 321 countries.

Trans-Dniester lives in a time warp. It is a Communist-style state and the people live a 1950s lifestyle.

It is officially part of Moldova and it is not recognised as an independent country by the west. Its existence depends on Russian troops who are stationed in the country.

There is no Internet access and the people have little knowledge of the outside world.

It has all the elements of a Communist state that is safe and comfortable to live in if you keep to the rules. But anyone who steps out of line is stamped on.

Our guide Natalia Cojuhari found that out when an elderly American tourist took photos at the wrong time.

''He carried three cameras and they thought he was a journalist,'' Natalia said.

''We were arrested and put in a cage for three minutes. It was terrifying.

''He was quite a nervous tourist and was not smiling any more. I told him to relax and enjoy the experience.''

We were given strict instructions by Natalia on how to behave and could take photos only when we were given the green light.

We had a straightforward visit and did not have any hiccups.

It is tourists who try to go into Trans-Dniester by themselves who have problems.

The officials are used to taking bribes and charging exorbitant prices to those who try to enter without the official tag.

''You are experienced travellers and understand the importance of having a guide,'' Natalia said.

Natalia and her driver Metri are experienced and know how the system works to get their clients through the checkpoints quickly. There was a disorganised queue at the checkpoints but Natalia's skill and experience helped us to push our way to the front and get our passports stamped.

It was easy going on the Moldovian side but there was a long wait on the other side.

Natalia filled in our forms in the local language and pushed her way to the front of the queue.

Our credentials were checked at another two posts before we could drive through the country.

Trans-Dniester has been under Russian control since 1792, when the Russian general Alexander Suvorov beat the Turks.

Trans-Dniester broke away from Moldova in 1990. Moldova became independent from the Soviet Union in 1991.

Trans-Dniester decided to stay with Russia when the Soviet Union dissolved in the early 1990s instead of being part of Moldova.

A civil war was fought for six months in 1992 before an uneasy peace was brokered.

There remains an uneasy truce between breakaway Trans-Dniester and Moldova. Russian troops keep the peace.

The memorial to the fallen is across the road from the large parliament building where there is a large statue of Vladimir Lenin. The parliament has 48 MPs.

There is also a large statue of Russian general Alexander Suvorov on his horse and relics of a Russian tank that was used in World War 2.

An important aspect of the history of Trans-Dniester goes back to World War 2 when it was part of Moldova and fought with the Soviet Union against the Nazis.

Nearby Romania backed the Germans and was brutal to the Moldovians.

The older generation retains that memory and bluntly refused to become part of Romania after the collapse of the Soviet Union.

Trans-Dniester was established in 1941 as a ghetto zone for Jews who were expelled from Nazi occupied lands.

''It was called the March of Death when they walked naked in winter,'' Natalia said.

''If they couldn't move, they were shot. A generation became negative to the Romanians because of the way they were treated in the war.''

Life is not all bad news in Trans-Dniester under its Communist-style government.

They use the Trans-Dniester rouble instead of the euro as currency and we had to exchange euros to get local money.

Once we had been cleared by security we passed through the city of Bender.

''Vladimir Putin jokingly suggested that it should be called Sherriff after the Russian-backed company that does a lot of business in the town,'' Natalia said.

As we entered the capital of Tiraspol we saw people enjoying themselves swimming in the local river and sun bathing on the sandy shore.

We walked through the town and had a drink of sweet ''Bread Beer,'' served by a big and friendly Russian woman by the bridge that overlooked the river. She gave us a big Russian-style hug.

We drove past the gates of a fortress where the Russian troops are housed. It was built by a Turkish Sultan in 1538.

The capital of Tiraspol is still a focal point for the silk and carpet trade.

Trans-Dniester is not recognised by the West.

''It doesn't exist as a country except for people from travel clubs, who add it to their list,'' Natalia said.

After our visit back to the past in Trans-Dniester we travelled back to Moldova and learnt that Chisinau is the third largest city in area in Europe behind Reykjavik, in Iceland, and Sofia, in Bulgaria.

Chisinau has a population of 750,000 and is punctuated by large Soviet-style apartment blocks where most of the population live.

Ninety percent of the population own their own apartment.

Natalia's parents were given an apartment under the Soviet regime when she was born.

Natalia lives with her parents in the two-bedroom apartment.

''Apartments are cheap,'' she said.

Moldova was the bread basket of the Soviet Union with its rich black soil that grows grapes, sugar cane, egg plants, wheat and tobacco.

It is a country noted for its walnut trees that grow alongside the roads and can be harvested by the public.

''It was our first Olympic medals for 30 years,'' Natalia said.

''Thirty years ago we won a gold medal in wrestling and 40 years ago in canoeing.''

Tourism is important and 200,000 tourists visit Moldova each year.