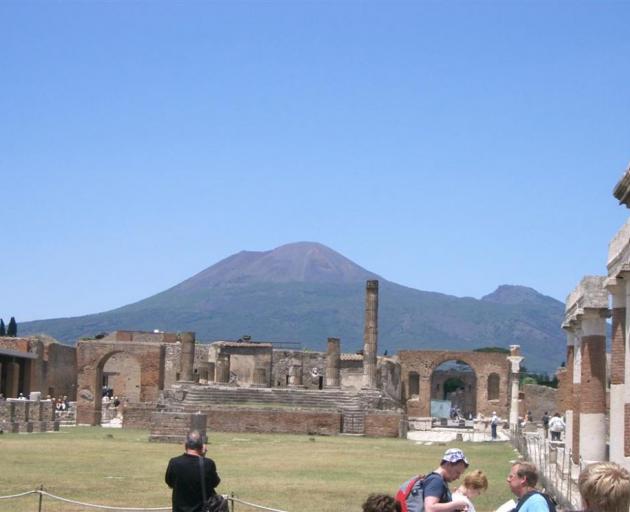 Pompeii, to the south of the Mt Vesuvius, was completely buried under more than 6m of ash. Photo: Wikimedia Commons

Mt Vesuvius dominates the skyline of Naples and the surrounding Italian countryside, a reminder of its devastating effect on the town of Pompeii, reports former Otago Daily Times journalist Katrina Megget.

The dead man's face stared up at me, his teeth clenched in a grimace of pain. Beside him lay other bodies in various states of agony, some curled in the foetal position, others with their hands outstretched trying to fend off death.

These weren't real bodies, rather the plaster casts where real bodies had lain, swaddled in smouldering volcanic ash from the infamous Mt Vesuvius eruption of AD79 in Italy.

Still, the frozen death masks were haunting. Outside the exhibition at the archaeological site Pompeii, the sky was blue. But against that backdrop was the imposing outline of Mt Vesuvius, all 1280m in height.

Today, the massive volcano slept but on August 24, AD79, it burst to life with a fury, showering the surrounding countryside in ash, mud and volcanic rocks. Naples, the city northwest of Vesuvius - and home to the pizza - was unscathed by the eruption but Pompeii and Herculaneum were not so lucky.

Pompeii, to the south of the volcano, was completely buried under more than 6m of ash, suffocating people as they tried to escape or shelter from nature's forces.

Within two days, there was no sign of the city and within several years people had even forgotten where Pompeii had stood.

Then, in 1599, Pompeii was rediscovered and full-on excavation of the buried city began in the mid-1700s. The findings provide a glimpse into what life was like in the market town in AD79.

Walking down the deep cobbled streets of ancient Pompeii, I saw the grooves in the road where horse-drawn carts had trundled, the row on row of high red-brick walls, the majestic courtyards of lavish homes, and columns that now hold up invisible roofs.

A black-and-white mosaic of a guard dog with the words ‘‘cave canem'' (beware the dog) survived, as did a bronze statue of a dancing faun (the original is now on display at the National Archaeological Museum in Naples).

There was a public bath, an amphitheatre and 25 brothels (even the male genitalia directing customers can still be seen carved into the walls). And there were bodies, lots of dead bodies.

During the excavations, cavities were found in the ash that contained the remains of human skeletons. These cavities were pumped with plaster of Paris and the ash removed to reveal plaster moulds of bodies depicting the moment of their deaths.

These were the bodies I had seen earlier as a macabre and gruesome display.

As I walked among Pompeii's ghosts, I watched Vesuvius, wondering at the panic the people must have felt as ash and rock rained down on them. Although vast, the volcano seemed some distance away. On a sunny autumnal day, it was easy to forget the danger that lurked on the horizon.

At the town of Herculaneum, I was confronted with more death. A small seaside town northwest of Pompeii and about 7km closer to Vesuvius, Herculaneum is the lesser known of the towns obliterated by the great eruption of 79AD.

Thicker volcanic deposits at Herculaneum meant the town is generally more preserved than Pompeii, from the art on the walls to the mosaic floor tiles; from the preserved kitchens to the wooden beams, charred from the heat of volcanic detritus.

When no human remains were initially found, excavators thought the occupants of Herculaneum had successfully fled the volcanic devastation. But when digging began on the boathouses in the port area, a graveyard of more than 300 perfectly preserved bodies was discovered.

Now I stared into the dark depths of the boathouses that revealed the muddle of bones. There were hundreds of them; skulls with dark voids where eyes should have been; ribs and spines and femurs tossed together in piles; arms wrapped around other skeletons, a sign of comfort amid the ruin.

They had come here to shelter from the eruption, to await rescue, yet had met their death. The superheated pyroclastic flow of ash and gas had stripped the flesh from their bodies and burnt their bones.

The humid day suddenly felt chilly. Thoughts of death and destruction lingered yet a visit to Pompeii and Herculaneum would not be complete without a visit to the monster that had unleashed this inferno almost 2000 years ago.

The tourist information centre in the newly established town of Pompei, built around the ruins and catering for the 2.5 million tourists visiting every year, was filled with the normal tack: magnets, books, DVDs on Vesuvius and Pompeii, and a unique set of playing cards featuring artwork from Pompeii's brothels.

As we waited for the shuttle I asked the girl at the information desk whether she was scared to live in the shadow of Vesuvius? Did it concern her that the volcano might erupt again?

Indeed, it has been more than 70 years since Vesuvius last erupted. In March 1944, the volcano violently erupted with streams of lava, one flowing at a speed of 161kmh.

Two towns were destroyed. Giuseppe De Natale, research director at Italy's National Institute of Geophysics and Volcanology, said Vesuvius was likely to erupt again but it was debatable as to whether it would be big or small.

A large eruption could be a problem when the urban population living on the skirts of the volcano are considered: about 700,000 people live within a 10km radius of Vesuvius, while the population of Naples sits at about one million, with an additional several million tourists visiting the city, volcano and surrounding areas every year.

‘‘Extreme eruptions of Vesuvius have buried lively cities and villas several times,'' both before and after the eruption in AD79, De Natale said.

‘‘It can obviously happen again, but in this case we have to absolutely evacuate people before the eruption to avoid killing anyone.''

Vesuvius, and the Campi Flegrei, a potentially devastating volcanic field lying to the west of Naples, mostly underwater, are the best monitored volcanoes in the world, De Natale said.

If either awakes, he said, scientists would know and be able to predict an eruption weeks or months in advance. That gave me some relief as I huffed up the last 860m from the car park to the summit of Vesuvius.

At least I would die quickly if it did suddenly decide to erupt, I thought ruefully. I looked around at the other tourists stomping up over the rusty crumble of volcanic rock.

They didn't appear in the least bit concerned about the danger underfoot; instead they animatedly puffed and gesticulated at the view.

I took a breather, focusing away from the volcano's crater and out to the rippling blue sea and the mountainous profiles of the islands Ischia and Capri, while Naples reached out in the distance to the right. I caught a snippet of conversation between two travelling companions.

‘‘You know, I wasn't scared of Vesuvius erupting until I saw that YouTube video re-creating what it was like when Pompeii was destroyed,'' one girl said.

Staring down the vast funnel-shaped crater, at the striated slopes and pooling shingle, I had the uncanny thought that Vesuvius' crater was like a giant egg timer that looked like time was about to run out.

Wisps of steam floated out of fumaroles, seemingly hanging for a moment before disappearing. It was another reminder of the latent power of Vesuvius. On board the shuttle bus back to Pompeii, I took in the fertile lands and the swathe of volcano. Beautiful yet deadly.

We careened around a corner, the bus wildly honking its horn to warn oncoming motorists. There was much to be said about Italian drivers.

Flung around in the back as the bus driver stomped on the brakes and swerved around more tight bends, I wondered, however, if the bus ride down would kill me first.

Both Pompeii and Herculaneum (Ercolano station) are an easy and quick train ride from Naples. Numerous shuttle companies will take tourists to Vesuvius' summit car park from Pompeii, Herculaneum or Naples.

Naples is a bustling, edgy city, filled with crazy drivers and continuously honking horns. Not recommended as a base if you value quality sleep. The new town of Pompei is quaint, clean and quiet with easy access to all historic sites and Vesuvius, and has great gelato.

It's possible to see both Pompeii and Herculaneum in one day but to really appreciate the richness of history and see all of Pompeii (it is a large town) it's best to devote a day to, at least, Pompeii.

A visit to archaeological sites wouldn't be complete without a trip to the summit of Vesuvius. Most information and tourist centres can provide package discount deals incorporating all the sights if bought together.

Meanwhile, Naples is a must for the atmosphere and pizza. Sorrento, further south of Pompeii, makes another day trip and is also the door to the famous and picturesque Amalfi Coast.

Animation of the Mt Vesuvius eruption from Pompeii: www.youtube.com/watch?v=dY-3ggKg0Bc