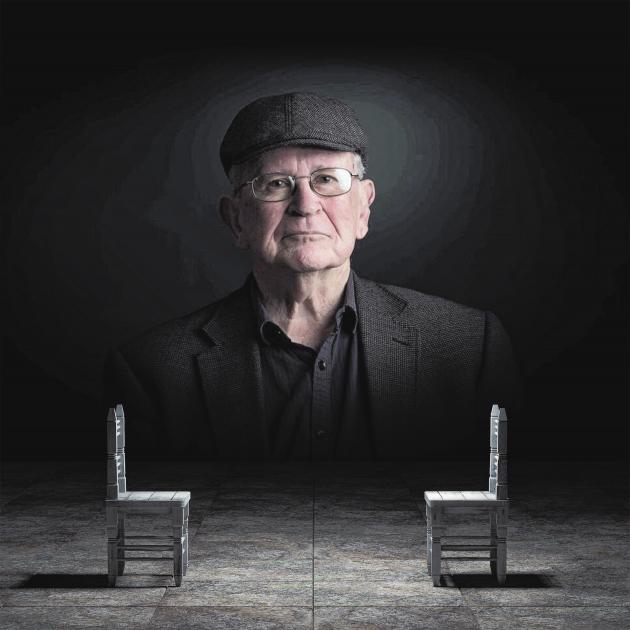 Writer Vincent O’Sullivan has lent his pen to a new production, Simple acts of Malice, devised in concert with Richard Huber, Simon O’Connor and Barbara Power. PHOTO: GETTY IMAGES/GRANT MAIDEN
A new play to debut at the Dunedin Arts Festival is not about telling the truth, but might have truths to tell, writes Tom McKinlay.

Vincent O’Sullivan says his entry in the Dunedin Arts Festival programme owes a debt to a play that is famous for, among other things, beginning with a misspelt expletive.

Among those other things, is that the play’s first night was also its last after it "offended almost everyone who saw it" — it was an "inglorious slop-pail" of a thing, according to one critic.

That play was Ubu Roi, by the French playwright Alfred Jarry, performed in Paris in 1896 and now celebrated as variously anticipating modernism, Dada, Surrealism and the Theatre of the Absurd.

"That’s where we started but, of course, moved a long way from there," O’Sullivan says.

There is now no direct link at all, he says. It is not clear whether he is providing reassurance or managing expectations.

But then, he later suggests of his play, "I think some people will think it is pretty off the wall".

And offers that, "It gave me a chance to be both singularly unpleasant as well as ... having comic scenes ... And that was fun."

So some of the spirit of Jarry’s absurdist anarchism appears to have survived the development process.

And indeed there’s a bit more backstory here yet, because the play, Simple Acts of Malice, is, in fact, a collaboration between O’Sullivan and the three members of RBS Productions: Richard Huber, who directs, and the actors Barbara Power and Simon O’Connor.

The three have worked together previously, Power and O’Connor combining for the two-handed One Day — two plays of their own devising — under Huber’s direction.

O’Sullivan was recruited to join the new endeavour when he lived just over the fence from Power.

"I was the new boy brought in," O’Sullivan confirms. "But I was very glad to have the chance to work with them and to be able to do something in terms of writing that was quite different to anything I had done before."

Writing, he says, can be a bit of a solitary vice.

O’Connor says the three of them in RBS (the first letter from each of their names) were inspired to work with devised theatre by the example of British playwright and film-maker Mike Leigh.

"Which is developing theatre, plays, through improvisation, I suppose, but particularly through going into the deep background of characters."

The three of them wanted to do something else with that "hyper real" approach by getting a scriptwriter on board and applying it to something a bit larger than life, O’Connor says.

"Once [former US President Donald] Trump got in or started looking like he might, I got very interested in looking around for some sort of material that would reflect ... the extremely disturbing world that he was throwing light on to — a mixture of buffoonery and lies and the utter uncertainty of truth, and that grandiosity."

He picked up Ubu Roi — a tale of overweening ambition, betrayal and double-dealing — but it wasn’t quite the ticket, so the call went out to O’Sullivan — over the fence.

They worked together, the four of them, one day a week, improvising and discussing, then the playwright would go away and return with some more script. And so on.

"It still has some of the Ma and Pa Ubu, these grandiose, greedy, voracious people at the heart of it," O’Connor says.

The play is another entry in the extraordinary CV of Vincent O’Sullivan (DCNZM). It’s play number six. The last one staged was Take the Moon, Mr Casement at Christchurch’s Court Theatre back in the 1990s. He’s recently published a new poetry collection, and is off to Wanaka during the Dunedin Arts Festival to talk about his "biographical portrait" of Ralph Hotere, The Dark Is Light Enough — an Ockham award finalist.

This new drama, Simple Acts of Malice, finds its protagonists, Bones and Elaine, holed up on the lam from a "hectic lifetime of mayhem", according to the Dunedin Arts Festival programme, during which it will be staged — a touch incongruously — in a yoga studio.

Bones and Elaine seem well deserving of each other — their conversation references the likes of the Bassett Rd murders, Bones claims a life as a mercenary — but the claustrophobic confines of their bolt hole are not well suited to their "malevolent energy".

If it sounds a little bit Covid lockdown, that is in fact coincidence, if not entirely unwelcome.

O’Sullivan says the period during which the four of them worked on the play pretty much lined up with the pandemic — but that it was no part of their narrative.

"So what we finished up with is this play that fortuitously works in with the lockdown, because it is basically a man and a woman locked in a room. But it is really beyond that, they are locked into themselves, their personalities," he says.

O’Sullivan is concerned that might sound a bit intellectual, so assures that the intention was to turn the ideas into fun, entertainment.

Those games might contain some truth or involve elements of fantasy, or just give shape to assorted resentments.

"Sometimes it is quite, not physically, but verbally aggressive, but at other times there is almost a cloyingly sentimental connection between them. But the point is, all of these are in fact performances that they get up to together to make life tolerable in this really appalling situation of lockdown — which hasn’t got anything to do with the Covid thing, it just happened to coincide with that.

"But of course that gives it an added poignancy, especially when you read that the number of divorces in New Zealand jumped so much during Covid."

We’re not told precisely why Bones and Elaine can’t go out.

"You just know they are a bit scared and there are fantasies about people who might be after them."

They both regret the path that has led them to their predicament, but at the same time enjoy trawling back through it, building themselves up — even if that involves acts of wilful invention.

"All of us, I think, sometimes can tell a story about ourselves — we don’t lie about it, but we edit it," O’Sullivan says.

Exaggeration arrives whether by design or not, in order to communicate the essence of a memory.

The last people to tell you the truth about themselves, are the people themselves, O’Sullivan suggests.