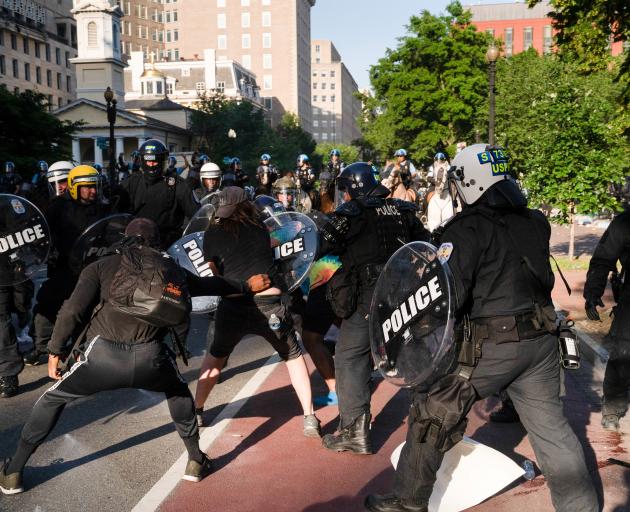 Riot police rush protesters in Washington. Photo: Reuters
The Australian embassy in Washington DC has reached out to the US State Department after a Network Seven reporter and cameraman were beaten by police outside the White House.

Australian Ambassador to the US Arthur Sinodinos said on Tuesday he was "aware of the treatment" inflicted on Amelia Brace and Tim Myers.

Brace was clubbed with a truncheon and Myers hit with a riot shield while covering peaceful protests in Washington DC's Lafayette Square on Monday.

Declaring himself America's law and order president, @realDonaldTrump has vowed to dominate violent unrest with soldiers, putting the military on standby. Police have cracked down with indiscriminate force with images of a 7NEWS crew under attack under investigation. @ameliabrace pic.twitter.com/ffiAl5Wzuw

"We are providing consular support to the Australian citizens involved and my team will continue to check on their wellbeing," Sinodinos said.

"I understand that Channel 7 will make a formal police complaint asking to have the matter investigated.

"We are in discussion with the State Department and they have offered assistance to identify where the complaint should be targeted.

"As Australia's Foreign Minister, Marise Payne, emphasised overnight, Australia is always supportive of people's right to peaceful protest and we encourage all involved to exercise restraint and to avoid violence."

The beatings happened when police and National Guard units aggressively cleared the square to allow US President Donald Trump to pose for photos outside a church holding a bible.

Brace and Myers were shot with rubber bullets and struggled to breathe after tear gas was fired at the crowd.

Brace said they were "pretty bruised, but okay".

Seven's director of news and public affairs Craig McPherson described the police actions as "nothing short of wanton thuggery".

Payne said she asked the Australian embassy to investigate.

"I want to get further advice on how we would go about registering Australia's strong concerns with the responsible local authorities in Washington," she said.

US Ambassador to Australia Arthur Culvahouse said the US takes mistreatment of journalists seriously.

"We remain steadfast in our commitment to protecting journalists and guaranteeing equal justice under law for all," Culvahouse said.

The police crackdowns follow Trump's advice to US governors that they need to aggressively target violent protesters.

"You have to dominate or you'll look like a bunch of jerks, you have to arrest and try people," the president told the governors on a conference call.