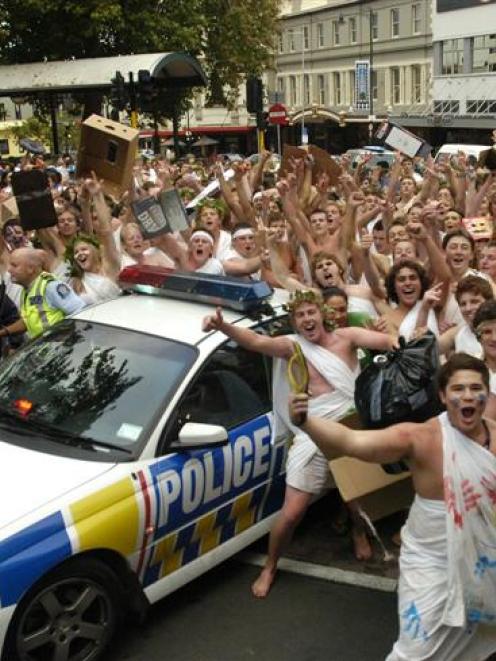 A breakdown in communication is believed to have resulted in hundreds of first-year students assembling an hour earlier than the official 7.30pm start, which may have fuelled the trouble, OUSA president Edwin Darlow said last night.

He believed students' pent-up energy following the cancellation of Orientation events because of wet weather may have contributed.

Senior Sergeant Trevor Thomson, of Dunedin, said officers were prepared for the parade but were taken aback by the early arrival of "unorganised halls" at the starting point, the Dental School, in Great King St.

Extra officers were sent when property damage started, he said.

The parade of about 2000 left the Dental School, heading for the Octagon via George St, about 7pm. By this time, participants had been targeted by egg-throwing bystanders.

As the large mass of students moved into George St, hundreds of eggs, bottles, rubbish, and buckets full of vomit and faeces, were thrown from first-floor verandas and alleyways, as well as at shop frontages.

The crowd began to chant and others broke ranks to run to avoid being hit.

Car windows were smashed, rubbish bins were emptied on to the street, the shop window of Brent Weatherall Jewellers was cracked, shop signs were pulled down and glass littered the street. People ran over cars and away from OUSA volunteers trying to control the crowd.

Some participants had cuts to their feet, arms and faces.

One first-year student from Wellington yelled he was going to "total this city" as he ran to join students running down George St towards the Octagon.

International student Kelron Harry, of the Caribbean, who was in the Octagon with his wife and son, said the crowd of chanting students appeared aggressive.

"This is a real culture shock."

Dunedin city councillors Dave Cull and Chris Staynes were at a wine tasting above Munslows Fine Wines and came out to survey the damage.

Cr Cull was furious at the destruction in George St.

"Why should we tolerate this here? I don't think there would be anywhere that this would be tolerated.

"Why should we allow people to throw eggs and litter down our main street and then expect the city to pay to clean it up?"

However, he said caution was needed when apportioning blame, as not just students were involved.

"It is nice to see students having fun, but this is a bit past that."

When told about events last night, Dunedin Mayor Peter Chin said he was disappointed, especially as he had welcomed students to the city the day before.

"I talked about the respect they should have for the city and the way they should treat it as their own home.

"If some of those students were involved, then I am very disappointed."

Copa bar worker and student Erica Gold removed egg from windows on a George St premises after the parade.

"I feel really bad for these businesses. A lot of them will come to work tomorrow and have to clean masses of dried egg off their windows.

"This is just taking it way too far. We shouldn't have to take it. Just look at the streets," she said.

Miss Gold said she had heard participants and people lining the streets had bought packs of four dozen eggs in preparation for the parade.

Jewellery store owner Brent Weatherall, whose shop window was cracked, said he did not want to "jump on the bandwagon to bag students" but he would be asking the student association to pay for the damage. He estimated the window would cost more than $1000.

University of Otago chief operating officer John Patrick said it was inappropriate to comment until the university had had a chance to gather all the facts.