Election candidates vying to win the seat of Southland presented their cases at a socially distanced meeting in Queenstown yesterday.

Grey Power members from around the Wakatipu Basin heard from four candidates on a range of issues - from climate change to the Tiwai Point aluminium smelter.

Each representative had five minutes to pitch their case.

The Opportunities Party candidate Joel Rowlands said his speech was the first he had ever written in his life.

"I am against the airport’s growth for growth’s sake," he said.

"In the current climate we should be focused on creating a more sustainable tourism model rather than continuing the juggernaut conveyor belt we have seen over the last 10 years."

Green Party candidate David Kennedy, a retired teacher, said his party had a record of competence and success.

"Income disparity is growing in this country and needs to be reversed," he said. 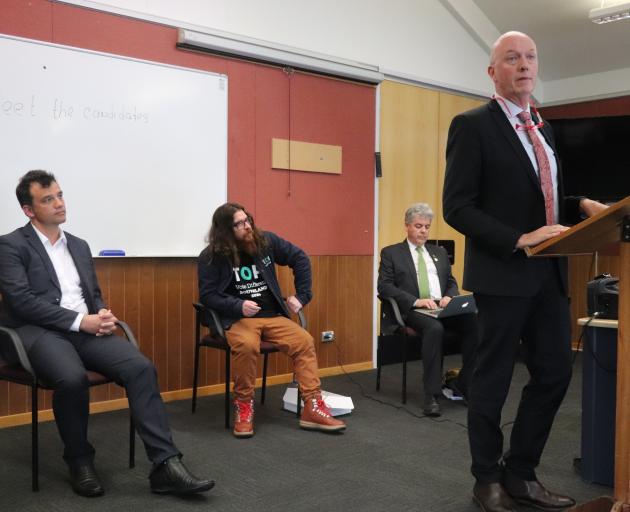 National Party Southland candidate Joseph Mooney talked about how Labour Party policies in the late 1980s had a negative impact on his family.

"My stepfather worked on farms when I was a child and the net result was he lost work ... the lived reality for me as a kid was we didn’t have food on the table quite a lot.

"If we don’t get the policies right we are going to see a lot of kids going hungry."

Labour Party candidate Jon Mitchell quoted former Queenstown mayor Warren Cooper, who said whoever was elected as the MP for Southland would need to "hit the ground running".

"I will be able to do that for you. My crisis leadership experience brings added value at a time when New Zealand needs it the most," Mr Mitchell said.