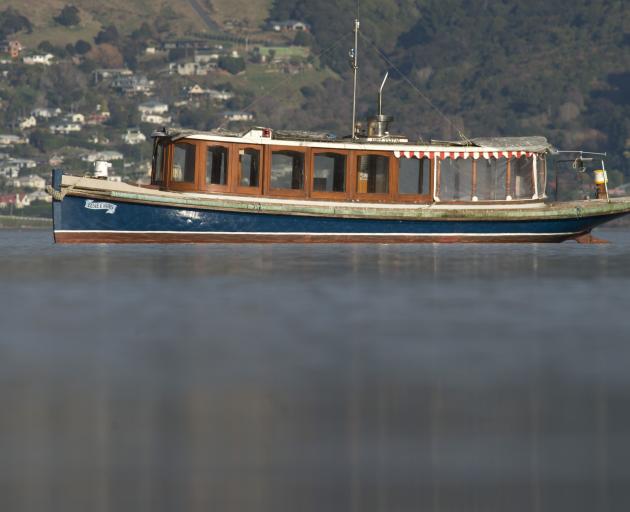 The repainted Elsie Evans moored in Latham Bay at Portobello last week. PHOTO: GERARD O’BRIEN
A lot of money and effort has gone into getting a vintage harbour vessel in shipshape condition to return to the water. But the Elsie Evans is still not ferrying paying passengers across the Otago Harbour. Has the mission become becalmed? Grant Miller reports.

"It’s fitted out better than it has been in its history."

The Elsie Evans Harbour Ferry Facebook page shows a series of videos of the vessel cruising effortlessly across the Otago Harbour or sitting calmly in the harbour basin.

Its hull was repainted this year, providing what appear to be the finishing touches of an extensive renovation project worth about $500,000 and which received $65,250 of funding from the Dunedin City Council.

What the ferry moored in the harbour is not doing is operating as a service for paying passengers.

For that, it needs to be confirmed as seaworthy, guided by a skipper certified to take passengers and run by an operator willing to take on a lease or be part of a partnership. 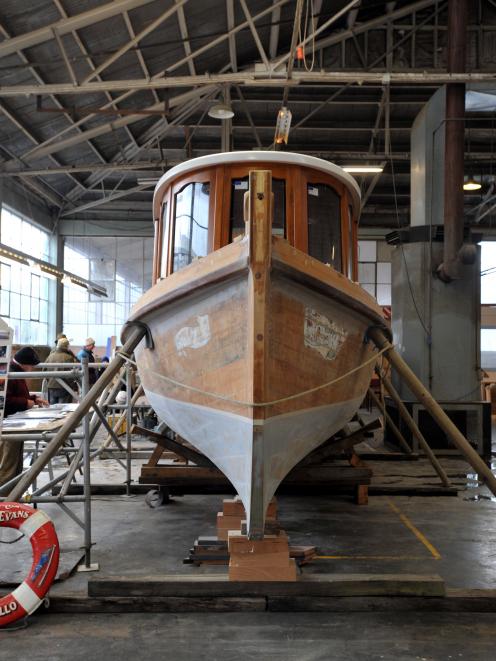 An upgrade of the boat continues at the former Wickliffe Press building, Dunedin, in 2013. PHOTO: GREGOR RICHARDSON
Mr Sutherland, Otago Harbour Ferry Inc chairman, says the society has achieved 95% of what it set out to do in 2003.

He likens the process, which has included hundreds of hours of volunteer labour, to climbing a mountain.

"The top of the mountain is the hard part."

He continues to call for an operator and the society made the same pitch on its Facebook page in March.

"This vintage launch is up for lease, so contact us and have a chat ... No time like the present to be part of the local tourist scene."

In these coronavirus-disrupted times, an operator would be brave to rely on international visitors. It is hoped a cycleway from Port Chalmers to Portobello could boost ferry traffic. The shared path for walking and cycling is expected to be completed next year and Mr Sutherland says people could bike the length of it and take the ferry to where they started.

He is, of course, well aware much doubt swirls around realisation of the society’s vision. 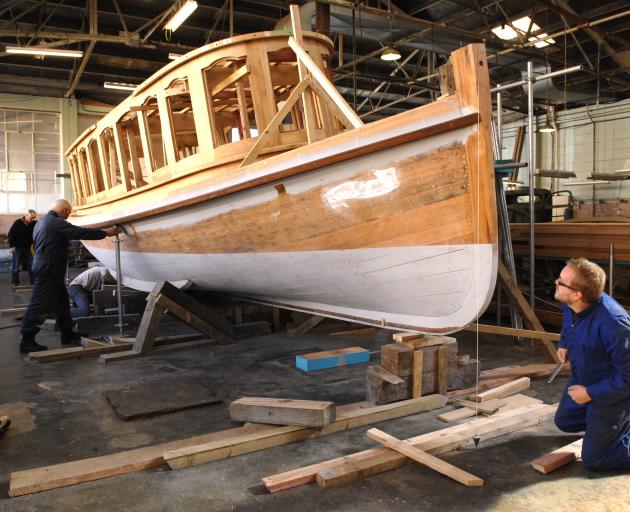 Keeping a close eye on the balance of the vessel is naval architect Drew Bryant, in 2010. PHOTO: LINDA ROBERTSON
Lack of a business case was a sticking point for councillors approached for funding in 2011, the society made missteps during the renovations, such as buying unsuitable engines, and business conditions do not now look encouraging.

"They said it was never going to get restored — and it’s been restored."

It was launched in 1901 and named after the wife of William Evans, the Timaru Harbour Board chairman at the time.

Portobello Railway and Ferry Company director Captain Percy Moss bought it in 1927 and the boat was used as a launch to tow barges or carry freight and sometimes take passengers.

It provided a regular passenger service from 1944 to 1954, ferrying up to 37 passengers between Portobello and Port Chalmers.

Elsie Evans in its heyday crossing Otago Harbour. PHOTO: SUPPLIED
The vessel had more than 50 years out of the water and, as Mr Sutherland tells it, "she sat on 44-gallon drums for 17 years, when my father John Sutherland found her beside an overgrown macrocarpa hedge at Waihola".

The South Canterbury Historical Society bought it in 1997, but the Elsie Evans returned from Timaru to Dunedin in 2003, where the vision was to get it back on the water, rather than preserve it for static display.

Repairing the hull was the first stage of the project.

The cabin area does not reflect how the vessel appeared in earlier times, but was instead modelled on a Protex built in 1907.

Otago Harbour Ferry Inc was clear about its aims when it formed in 2004.

They included restoring a harbour ferry to operating condition, promoting an appreciation of maritime heritage, raising funds and "to maintain and operate the said vessel for passenger use", for the recreation of members of the society and the public.

Elsie Evans at Portobello, 1978, with Sandra Calson and John Sutherland. PHOTO: SUPPLIED
The society’s 2021 annual return restates its charitable purpose, which is to restore the vessel "and then for the ferry to provide transport on the Otago Harbour". Restoration of the ferry is stated as the society’s main activity and the main beneficiary is said to be the general public.

However, since the vessel returned to the water in August 2013, members of the public may wonder about how well they have benefited from public investment.

No interest was charged and the loan did not have to be repaid, unless the ferry was sold or it spent more than a year outside the harbour.

Cr Lee Vandervis has historically expressed some support for the venture, but says there ought to be public benefit from the money put in.

"There has been significant public investment in it," he says.

"It should at least be on public display, until there are enough tourists to make it a viable proposition. 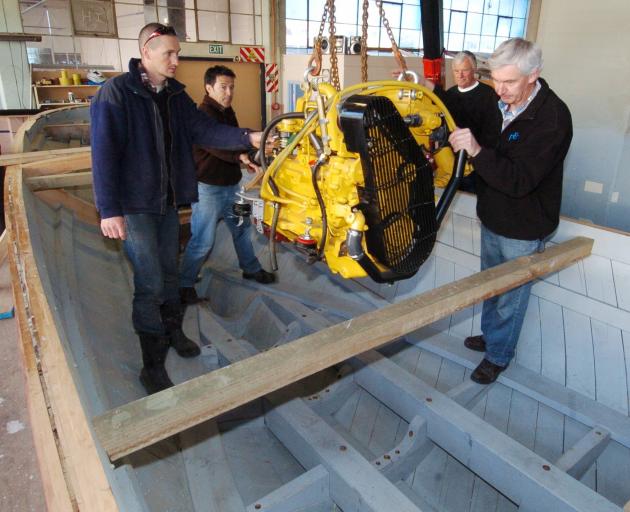 Guiding a diesel engine into place are (from left) Scott Broere, Shem Sutherland, Hugh Montgomery and Peter Broere in 2009. It was later replaced by a smaller engine. PHOTO: GERARD O’BRIEN
"A lot of people have put in an incredible amount of volunteer labour.

One man who has been happy to volunteer time is Stuart Reid.

His contribution has ranged from helping to wash down the inside of the vessel to installing windscreen wiper units.

He would hate to see the boat as a museum piece.

"It’s great to see a boat of that calibre on the harbour."

Some society members were interested principally in getting the vessel ready for launch and their interest subsequently waned, and some influential members have died. Differences of opinion also surfaced and Mr Sutherland came in for criticism.

However, society treasurer Darryl Young joined the committee in 2017.

He says Mr Sutherland has put in a phenomenal amount of work and volunteers remain committed.

The ferry, in Portobello in 2016. PHOTO: PETER MCINTOSH
The society’s accounts show significant activity between 2009 and 2013.

In 2019, Mr Sutherland characterised the final hurdles as a chicken-and-egg situation.

Funders would not commit their money to a seaworthiness survey until a lessee was found, and any potential lessees would not lease Elsie Evans until the survey was completed.

He and other volunteers offer much the same refrain now.

However, Mr Sutherland says the vessel’s potential and operating limits are now well understood and a business opportunity remains.

The Elsie Evans can now carry about 17 people, is relatively cheap to operate and looks elegant.

"People just love seeing it on the harbour."

1901: Elsie Evans built, first pilot boat owned by the Timaru Harbour Board, later plied Otago Harbour in various roles, including as a ferry, from 1928. Ended its days as a ferry in 1954, spent 17 years lying by a macrocarpa hedge at Waihola. Was stored in Timaru, and returned to Dunedin in late 2003.
2005: Portobello’s Shem Sutherland announces plan to restore vessel as a working launch carrying sightseers around the harbour.
February 2006: Expected cost of project reported in Otago Daily Times as $120,000.
December 2006: Mr Sutherland reports $73,000 raised for stage 1 of restoration, another $60,000 needed for stage 2. Hoped sea trials would begin by end of 2007.
May 2007: Mr Sutherland asks Dunedin City Council for $25,000 for final stage of the restoration. Project estimated at $160,000. Council agrees to $20,000.
November 2008: Work completed on vessel’ s hull, Otago Harbour Ferry Inc fundraising to complete the boat’s superstructure. Society reported to need $81,000 to complete what is now $200,000-plus restoration.
October 2010: Mr Sutherland tells ODT the society has raised more than $350,000, and was seeking a further $65,000 to relaunch the ferry.
August 2013: Vessel back in harbour.
June 2016: Mr Sutherland puts the cost of the restoration at about $480,000.
January 2019: Mr Sutherland says restoration almost complete, but vessel still needs to be surveyed and certified, which could cost $15,000.

I was on board once, she is beautiful.