If it were not for the fact that Torin Stephens loves computer coding so much, he might be like any other 9-year-old who is oblivious to the 1980s Atari space-themed multi-directional shooter arcade game Asteroids.

It was one of his father’s favourite computer games, and when he recently decided to use his coding skills to re-create a video game, Asteroids immediately came to mind.

It is one of many extracurricular activities the Maori Hill School maths and science whizz kid loves to do in his spare time. 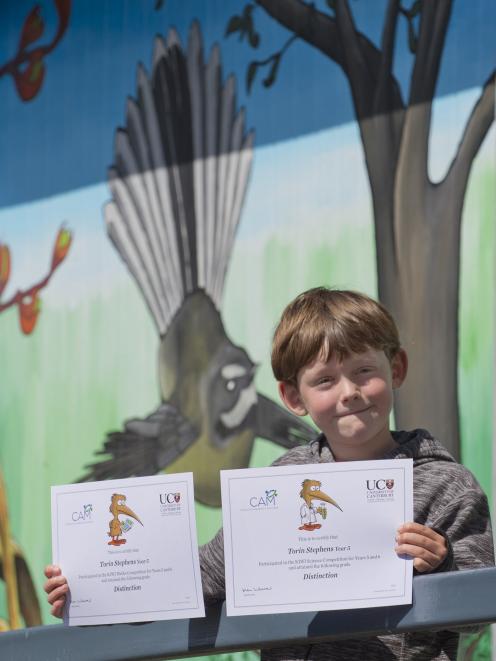 Maori Hill School pupil Torin Stephens with his distinction certificates for gaining the top marks in the year 5 University of Canterbury Kiwi Competitions for maths and science. PHOTO: GERARD O’BRIEN

He recently helped dismantle a Yamaha CLP-150 electric piano and then rebuild it.

"I like pulling things apart and putting them back together.

"It was quite fun doing the CLP-150. It helps me learn about how things are built."

He has also had success in computer coding at RoboCup competitions — winning the Otago region coding competition and finishing runner-up in the national final.

So it is not surprising Torin recently achieved the top marks in New Zealand in the year 5 University of Canterbury Kiwi Competitions for maths and science.

The tests were administered online and took about 50 minutes each to complete.

Pupils from more than 100 schools around New Zealand competed.

"I’m pretty happy about my results. Excited too."

"Not only does he have a scientific brain, he has a creative brain as well.

"He loves problem-solving — working out how to find creative solutions to things."

One of his biggest challenges at the moment is trying to re-create the 1980s digital invader game that came with Casio MG880 calculators.

Unfortunately, the scoring programme was not working properly yet, he said.

"I don’t know how to fix it yet, because I don’t really know what the problem is.

"What it’s doing is it’s adding the position in my array, but the thing is the array position works for finding out where that number is and if it is there at all ..."

If anyone can solve the problem, it will be Torin.