‘Kakariki’ and captain both retiring after Dunedin visit

Kakariki sails in Otago Harbour for the last time yesterday. Photo: Stephen Jaquiery
On Sunday evening,  Kakariki and its captain set sail on their last journey together.

Captain Michael Webb has been aboard the oil tanker Kakariki ever since it was built in 1999.

Now, after almost 19 years, both the 183m long ship and its captain will retire.

"The ship has been really good ... It’s just a good opportunity for me to retire at the same time. It’s a good time for me." 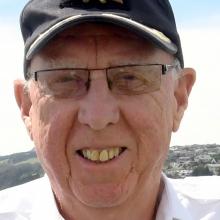 Michael Webb
He said it was time for the "younger fellas to step up".

Kakariki arrived in Dunedin on Saturday night and left the harbour for the last time for one final journey on Sunday before it is "sent to the breakers".

Kakariki will travel to Marsden Point, then Nelson and then Mount Manganui.

After Capt Webb steps off the ship for the last time, another captain  will take Kakariki to Singapore where it will "almost certainly" be sold on.

Although his career at sea had been enjoyable, he was not typically into boating and had no intention of spending his time on a boat or owning one  once retired.

Capt Webb preferred to go for walks and spend time in the bush. He  said he also  enjoyed baking and cooking and hoped to spend more time volunteering at the Port Chalmers maritime museum.

He and the crew had a few mini send-offs but nothing major.

Capt Webb said over the years he had experienced  some "pretty horrendous" weather but luckily had never suffered seasickness.

He was not aware of anyone suffering serious seasickness while he was captain and presumed the crew "must hide it well".

The ship, with a deadweight of about 46,724 tonnes, was used primarily for the transport of oil and bitumen. Capt Webb believed it was the largest ship navigating Otago harbours.

It had a  crew of 18 but over the past few years had housed 20 crew members as there were usually a couple of trainees on board.