100kmh limit too high for most roads in South: NZTA 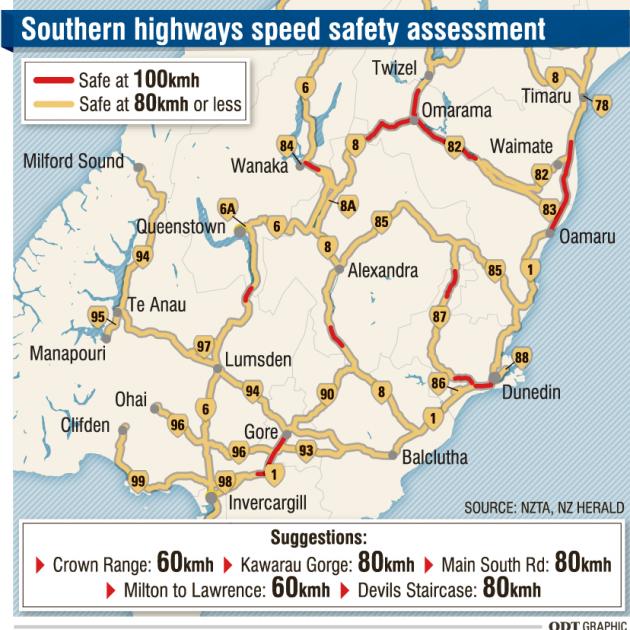 Almost every stretch of open road in Otago and Southland is too dangerous for a 100kmh speed limit, new data suggests.

The NZ Transport Agency's risk assessment tool, Mega Maps, suggests only a small fraction of the state highway network in the South should have a 100kmh speed limit.

Information about road width, hazards and alignment are used to determine a safe and appropriate travel speed.

The Mega Maps data was provided to The New Zealand Herald under the Official Information Act close to a year after it was first requested and under orders from the Ombudsman.

Nationally, the tool estimates 95% of open roads should have a speed limit lower than 100kmh, and that figure is higher in Otago and Southland.

It also suggests a lower speed limit for some of the accident hot spots in the South, including a 60kmh limit for the Crown Range Rd, 80kmh for the Te Anau-Mossburn highway, 80kmh for the Kawarau Gorge (State Highway 6) and 80kmh on Main South Rd (SH1), south of Mosgiel.

A 30kmh and 40kmh top speed for most urban areas is also recommended.

Information from the maps is used by both the agency and local councils when deciding on new speed limits.

Police and the Automobile Association also have access to the information.

An agency spokesman said the Mega Maps tool had been used for the past two years and had helped with decisions on lower speed limits both on state highways and local roads.

As work was still being completed, the details of any speed limit changes on state highways were not able to be provided, the spokesman said.

MegaMaps was only one part of a larger process which councils and the agency followed when assessing roads and setting speed limits.

AA Otago District Council chairman Malcolm Budd said the association was against any blanket reduction and instead supported targeting those roads which posed the most risk to motorists.

``We agree some roads should be reduced to 40kmh or 80kmh but they've got to be roads of high risk and have safety benefits.''

The Crown Range Rd was a good example of a road where multiple speed limits should be introduced, Mr Budd said. - Additional reporting NZME

The tightest bits through the Manuka Gorge are the only places where this speed limit is justified, and most traffic goes at 60kph or less now, regardless of the posted limit.

NZTA really need to get real about how they intend to get the road toll down. This isn't the answer.

Speed in itself does not kill- distracted/incompetent drivers kill. Those; on their phones, chatting away, tired, resulting in not focusing on the road, is what kills. [There are also a number of tourists who should not be driving from countries where you can 'buy/bribe' your way to a licence] but that is another story- we do not want to loose some of those export markets.

Their tool is wrong. I have driven on most of these roads and the limits as they are- are ok. A few more signs possibly but nothing major.

Grrrr!!!!! I'm almost literally tearing my hair out over NZTA's incessant focus on speed! It is completely the wrong approach!

The cause of the crashes are DRIVERS. Let me spell that out. D.R.I.V.E.R.S.! Even with these reduced speed limits, there will still be heaps of crashes, if not more!

Roads don't cause crashes without drivers driving on them. Vehicles don't crash by themselves. So therefore, the only thing remaining is the person behind the wheel! It's insanely blatantly obvious, but NZTA are not even remotely focussing on improving driver training, introducing compulsory car control courses, and forcing licence resits every ten years or so for everyone.

Those three things alone WILL bring down the road toll. Especially if the result of failing a license resit means you're not allowed to drive until you pass it. A good 500,000 people will fail a licence resit, i'll bet my house on it.

ODT, if there's any way you can start some sort of campaign that gets the NZTA to focus on drivers and not speed limits/roads (as much), you'd be doing a lot to reduce crashes in NZ. Trust me. They don't listen to little people, we need a bigger way to get their attention.

What rubbish is this?, I suggest the NZTA get a better tool.
The cops would be having an absolute field day with their quotas if this ever comes out.
Anyways, it's not the speed is the drivers who can't drive or obey the road rules.

NZTA really are the most incompetent outfit. Instead of slowing traffic down and increasing frustration, improve the roads and introduce a more thorough/ stringent driver testing system. These were designed decades ago, when vehicles were made of solid steel and weren't capable of achieving the speed and performance of modern cars.