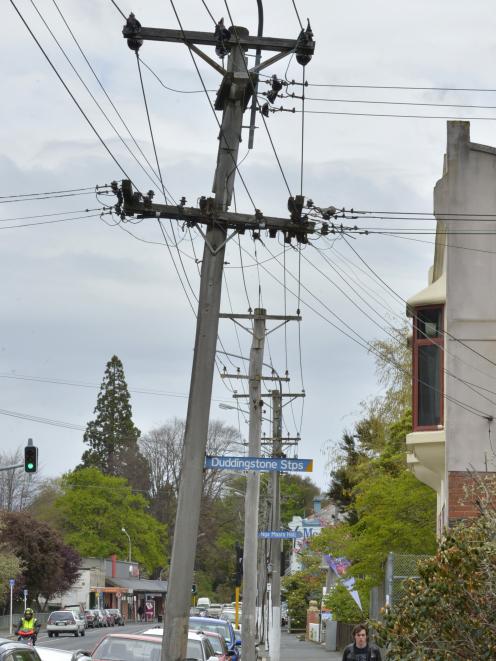 Power poles tied together in Moana Rua Rd. PHOTO: STEPHEN JAQUIERY
Aurora Energy has approved a $30.25 million programme to replace close to 3000 power poles but its chief executive is refusing to admit any fault over the way the network has been managed.

Aurora Energy and Delta chief executive Grady Cameron said the plan to replace the poles in Dunedin and Central Otago by December next year was a response to a loss of "public confidence'' in recent weeks.

However, he said the claims that led to the loss of confidence - that lives were at risk from dangerous power poles and the two council-owned companies put profits ahead of health and safety - were wrong.

He admitted no fault in his management, saying the network was ageing, but safe.

"Obviously, I guess we've recognised ... that some of the information that has gone out in the media has had the potential to threaten public confidence in the network.

"As a result, the board has [yesterday] approved an accelerated pole replacement programme.''

The board approved up to an extra $26 million for the programme, on top of the $4.25 million already budgeted for pole replacement this financial year.

The announcement was yesterday welcomed by Dunedin City Holdings Ltd chairman Graham Crombie and Dunedin Mayor Dave Cull, who said in a press release they had been assured there was no "immediate health and safety concerns from power poles throughout parts of Otago''.

In an interview, Mr Cull said he had no problem with spending an extra $26 million to fix a public perception issue.

"Perception is reality and if we can't assure the public and the workers that they are safe, then they don't feel safe,'' Mr Cull said.

When questioned further, Mr Cull acknowledged it did not make sense to spend $26 million if the network was already safe.

He believed the public would be happy with the response.

"I think I am pleased and the community will be pleased that we have a clear plan that will get any poles that may or may not be at risk, or perceived to be at risk, replaced in a relatively short time.''

Whistleblower Richard Healey was stunned by Mr Cameron's response and questioned why Aurora would spend tens of millions of dollars to fix an issue which it said did not exist.

If what Mr Cameron said was correct, he questioned why he had simply not come forward earlier to say the network was safe and no extra spending was needed.

If the network was safe, he questioned why poles were falling over with such regularity.

"A sane, rational person could not look at the number of near misses we have had on the network and say this is not a danger.''

He called on Mr Cull and others not to fall for the "spin'' they were being fed and question why other lines companies had come out to say they either had no or very small numbers of condition-one and zero poles.

He had tried to stay away from "personal'' attacks, but was now willing to call on Mr Cameron to "man up'' and resign.

Mr Healey also believed Delta and Aurora could be putting staff and contractors at risk by rushing the replacement programme.

Mr Cameron said the objective was to replace all 1181 condition-zero poles by April next year, and all 1729 condition-one poles by December.

"The fast-track programme will ramp up the rate of pole replacement from around 50 per month now to more than 300 per month from March next year.

"A programme of this scale will require more resources and Aurora Energy will be engaging additional contractors to supplement existing capacity from its primary contractor, Delta,'' he said.

He declined to respond to a question about whether he should resign as a result of the revelations in the past week.

Aurora and Delta board chairman Dr Ian Parton, who spoke via conference call, said he had confidence in Mr Cameron's management.

The board had not asked for his resignation "at this time, and I am not expecting one''.

Mr Cameron strongly disputed the claim Aurora had not learnt from the death of worker Roger Steel six years ago, and said it had a strong culture of health and safety.

Before the revelations of the past two weeks he had already gone to the board calling for work replacing power poles to be accelerated and he was disappointed Mr Healey went public.

"My only wish is that he had taken the opportunity to come and speak to me directly, because I think if he had recognised the conversations that I was having with the board directly, he might have felt slightly different about what our plans were.''

It was not subject to those specific regulations because it had an "audited public safety management system''.

The legislation said companies that did not have such a system were subject to fines of up to $50,000 per pole not replaced within the timeframes.

In a press release, Mr Cull said he was pleased Delta had clarified the classification
programme.

"I'm pleased Aurora has clarified the risk classification system that implied large numbers of poles needed to be replaced within prescriptive timeframes, when in fact the risk assessment process acts to prioritise replacing dangerous poles ahead of other categories of poles.''

Central Otago Mayor Tim Cadogan said he had discussed the report with Mr Cameron yesterday and been assured there was no risk of imminent failure of any poles.

"He said it was a safe, but aged network and I have to take that at face value.''

Mr Cadogan said it was good to hear replacing the Central Otago poles would be given the same priority as replacing the Dunedin ones, "and that's as it should be, if there's any danger at all''.

Delta originally planned to announce its plans today, but the announcement was brought forward to yesterday after the Otago Daily Times was leaked details about the plan.