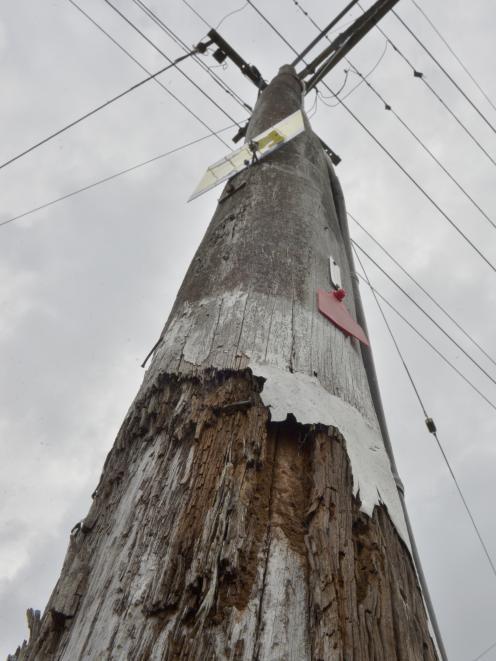 The Dunedin City Council-owned board announced the plan this afternoon after it and closely linked company Delta had been accused of leaving the public and workers at risk of death and injury due to the state of its network.

In a press release, chief executive Grady Cameron said the board approved the plan to fast-track its pole replacement plan at a meeting today.

Mr Cameron said the board had approved up to an extra $26 million for the programme, which when added to the $4.25 all ready budgeted for pole replacement this year came to $30.25 million.

''The fast track programme will ramp up the rate of pole replacement from around 50 per month now to more than 300 per month from March next year.

''A programme of this scale will require more resources and Aurora Energy will be engaging additional contractors to supplement existing capacity from its primary contractor, Delta.

``We have approached suppliers in the market who have indicated resource availability from early in the new year,'' he said.

The announcement was planned to be made tomorrow, but brought forward after Otago Daily Times was leaked details about the plan.

Great that this program will be accelerated, but how about hiring Dunedin or Otago people - take a couple of months and train them if necessary. Obviously the "normal" replacement program doesn't keep up with demand and you will need a bigger team into the future, so hire some permanent employees now.
What Dunedin doesn't need is another bunch of subcontrators from other cities. Local work for local people. Including Central Otago.