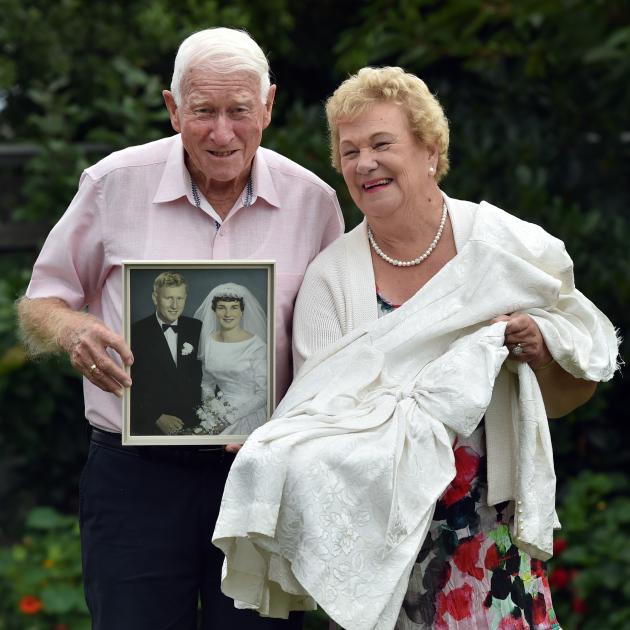 Celebrating 60 years of marriage are Charles and Wilma Burrell, of Mosgiel. Mrs Burrell holds her wedding dress. PHOTO: PETER MCINTOSH
The secret to a good marriage is putting family first, above all else.

This is the advice from Mosgiel retiree Charles Burrell, who will celebrate 60 years of marriage with wife Wilma (nee Jones) on Monday.

The couple have three daughters, three granddaughters, and one great-grandson.

Mr and Mrs Burrell will head to Queenstown, where they spent their honeymoon, on Monday, to celebrate.

The pair met in 1957, when Mrs Burrell was 17 and asked a friend to find her a date for the joint wedding of her twin cousins.

Mr Burrell, then aged 20, said when they met "it was instant".

The couple were married on February 24, 1960, at the Caversham Presbyterian Church.

Mr Burrell’s family had moved to Dunedin when he was 10 and bought the railway hotel in Mosgiel.

His family had a lengthy history in the hotel business.

For Mrs Burrell, learning to manage the Hotel Taieri in Mosgiel was an interesting change from the slow pace of country life in Middlemarch.

"During that time we had our three daughters. It was absolutely flat out."

She said their time running the hotel gave them some of their fondest memories.

"It was flat out raising three children alongside running the hotel."

Their advice for married life was simple.

"Don’t walk away from each other easily. Stand by each other.

"It’s about being patient and tolerant," Mrs Burrell said.

Mr Burrell said their marriage was as strong as ever.

"See you for the 70th — weather permitting."