Accused told police he is 'definitely not a creep' 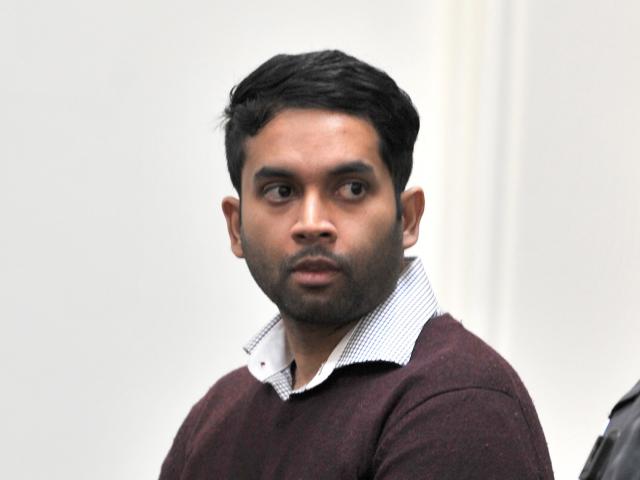 Venod Skantha. Photo: Christine O'Connor
A Dunedin doctor told police the theory he killed a teenage girl to stop her destroying his career was "absurd".

Venod Skantha (32) has spent the last three weeks on trial before the High Court at Dunedin charged with the murder of 16-year-old Amber-Rose Rush who was found in a pool of blood in her Corstorphine home on February 3 last year.

As the Crown called the last of its 70 witnesses yesterday, the court was shown the defendant's police interview - the first time the jury had heard his voice.

Skantha and his ex-partner Brigid Clinton were pulled over as they left the urgent doctors in central Dunedin on February 4.

He immediately asked Detective Constable Wayne O'Connell whether he was was under arrest but was assured he was not.

Ms Clinton previously told the court the accused had cut his hand that day playing with a sword, but Skantha told the officer before he gave his formal statement that he sustained the injury while cooking.

His heavily bandaged fingers could be seen in the video interview.

Skantha - wearing a green hoodie, shorts and jandals - told Det Const O'Connell he never had a close relationship with Amber-Rose.

"It was barely a friendship ... she's much younger than me," he said.

Skantha told the officer he heard a rumour the victim's death had been a suicide.

"I don't know what the cause of death was," he said. "Are you allowed to tell?"

Quickly, Det Const O'Connell made the suspect aware that police had seen an online exchange between him and Amber-Rose in which she accused him of molesting her.

The Crown case is that it was that conversation, just minutes before her death, that drove Skantha to violently silence her.

"So what?" he said of the allegations on social media. "That's childish stuff. That doesn't affect me."

Skantha said his position at work was not that fragile.

"Why would I risk my career and everything for that? It doesn't make sense. It's not worth it," he told the officer.

Skantha said he had no recollection of indecently assaulting the teenage girl because he had been drunk.

He was "definitely not a creep", he insisted.

Initially, the defendant told police he had picked up his friend on the night of February 2 and they had driven to Balclutha.

By the end of the interview, Skantha said his teenage driver took a detour along a beach road, stopping in a secluded car park.

"He just wanted to show me a nice spot," he said.

The defendant was adamant they had not disposed of anything there or stopped at Amber-Rose's home.

"Are you suggesting I did something ... I think it's absurd," Skantha said.

"I definitely didn't go to Amber's house. How would I even get in?"

The officer suggested Skantha's teenage friend had told him about a spare key hidden under an ornamental Buddha statue on the porch.

"If he knows that much maybe he did it," the doctor replied.

Det Const O'Connell put it squarely to Skantha that it was he who they believed was the killer.

"Don't say that to me. It's not in my nature. I promise you. I don't know where you're getting this from," he said.

Once the officer had formally arrested the defendant, he left the room to speak to superiors.

Skantha followed, asking to speak to his ex-partner, before being told he was being detained.

The defence will now decide whether they will call evidence next week.

If not, the Crown will close its case, followed by Jonathan Eaton QC's closing and Justice Gerald Nation's summing up.