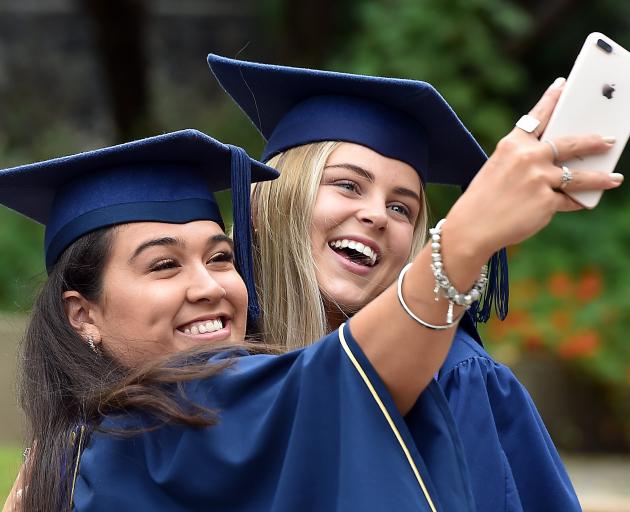 Libby Blore (22, left) and Sarah Thompson (21) celebrate collecting Otago Polytechnic bachelor of nursing degree certificates and registering as nurses yesterday, despite the postponement of yesterday’s planned graduation ceremonies at the Dunedin Town Hall. PHOTOS: PETER MCINTOSH
Makeshift graduation ceremonies have been held to provide some consolation to disappointed students after further cancellations due to a security threat.

Police have still not released details of the threat that caused several University of Otago and Otago Polytechnic graduation ceremonies to be cancelled this week.

The Otago Daily Times has confirmed the warning was sent by email and included threats of a shooting and a bombing.

But the institutions have found a way to still mark the graduands’ achievements.

About 400 of the 615 due to graduate from Otago Polytechnic at two ceremonies at the Dunedin Town Hall yesterday instead picked up their certificates and had their photos taken at the polytechnic’s "Hub", mainly between 11am and 3pm.

Graduands pick up their graduation certificates at the polytechnic Hub yesterday morning.

Some had their photos taken with college heads and senior polytechnic staff.

Polytechnic director, marketing, sales and communications Leanne Ross said the event had been put on quietly, while trying to balance "the lingering hurt and anger of many graduands, with the pockets of joy that some felt today".

Some food prepared for planned pre-graduation events was served, and some security staff, Campus Watch staff and at least one uniformed police officer provided security, particularly at the entrances to the complex.

Several polytechnic graduands interviewed by the ODT said they were disappointed by the postponements, but understood the security requirements and appreciated the polytech’s efforts to run an alternative event.

A university spokeswoman said 200-300 university graduands unable to graduate on Wednesday had picked up their certificates at an alternative event run at the St David Lecture Theatre from 8.30am to 2.30pm on Thursday.

Graduates could also have photos taken with their certificates if they wished, and alumni staff attended to welcome graduates to the Otago alumni community, she said.

Vice-chancellor Harlene Hayne yesterday announced the cancellation of today’s ceremonies and parades after getting police advice.

"My heart goes out to you all. This has been a difficult decision and I hope that you will find ways to celebrate," Prof Hayne said.

"The depth of feeling has been only too real over the previous few days. No-one deserved this, particularly the young people from the university and polytech who were expecting to celebrate their graduations at the town hall this week."

On-campus events were still able to go ahead, and a replacement ceremony next year would be planned, she said.

Next week’s ceremonies, on Wednesday and Saturday, were expected to go ahead.